Головна Сторінка » English stories » “I am dreaming to meet again”: the story of a woman from Bakhmut who is looking for her wounded son

"I am dreaming to meet again": the story of a woman from Bakhmut who is looking for her wounded son 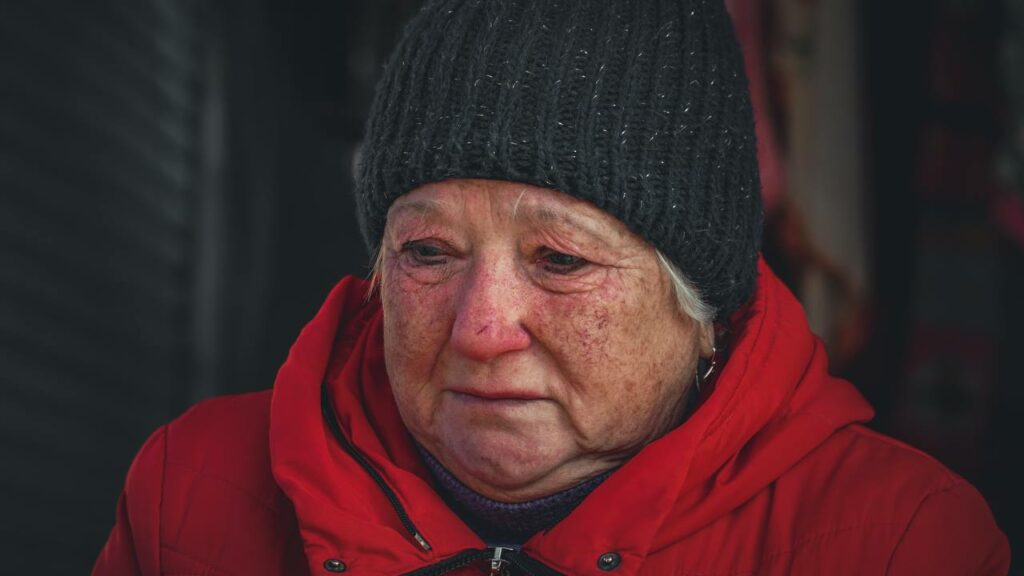 Larysa, a saleswoman from Bakhmut, is looking for her wounded son
Настя Горпінченко

About 15 thousand people are still staying in Bakhmut, Donetsk oblast, out of more than 70 thousand who used to live here before the full-scale war.

The Slidstvo.Info journalists visited Bakhmut, Donetsk region, and talked to local residents about life under constant shelling and their decision to stay in the city.

ALONE IN A DESERTED MARKET

The shelling in Bakhmut almost never stops, the Russians seem to be using everything imaginable to hit it. Both artillery and aviation are working in the city, and machine gun and automatic rifle bursts can be heard on the outskirts.

But despite this, public utilities are working in the city, several shops are open, though only until 14:00, as well as a spontaneous market and even a few stands on the central square, near the Astron shopping center. 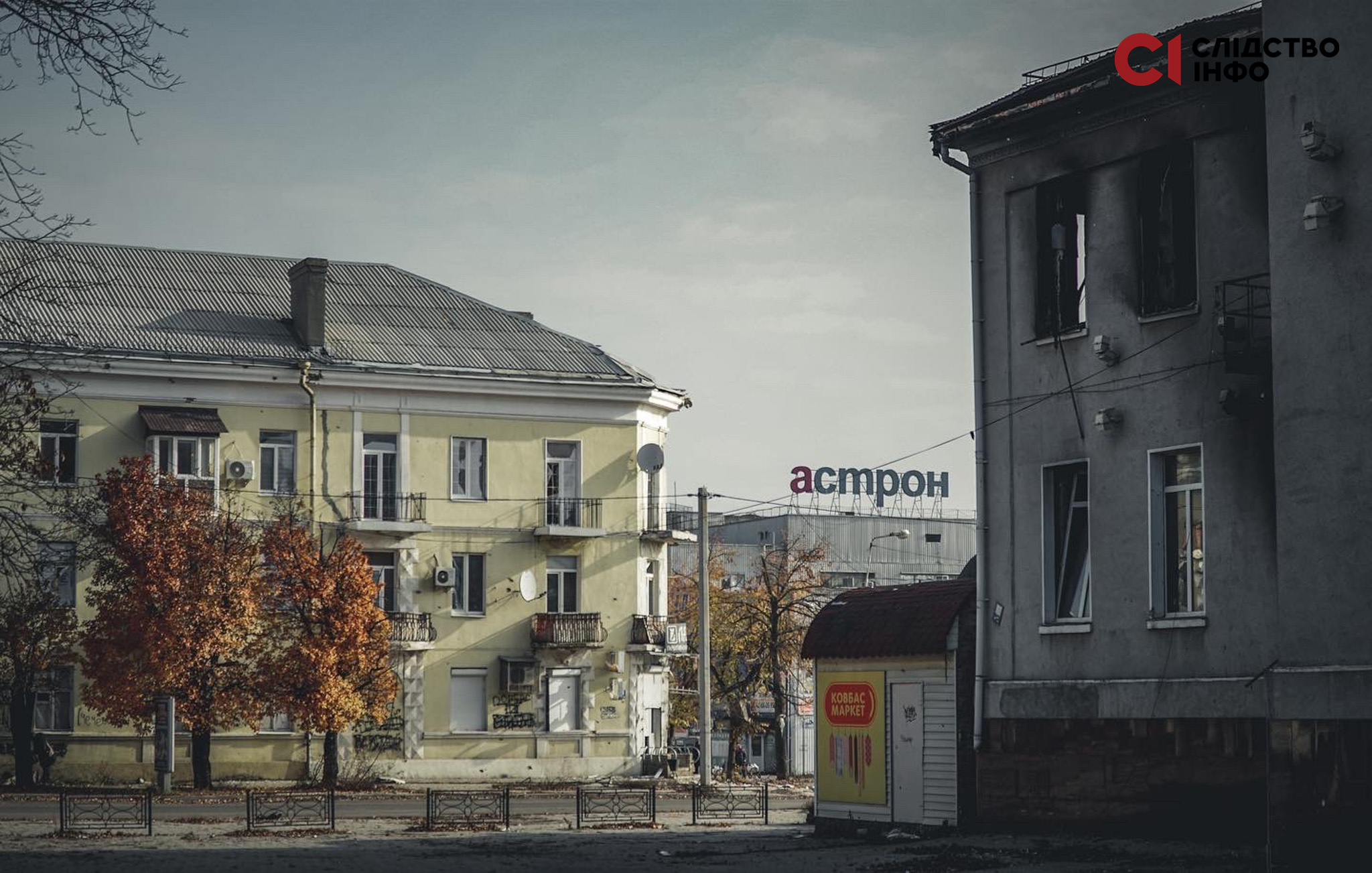 The Astron shopping center in the middle of Bakhmut

Larysa sells bed linen and towels at one of the points of the central market. Her container with neatly hung goods looks surreal in the empty market, which has not been open since summer. 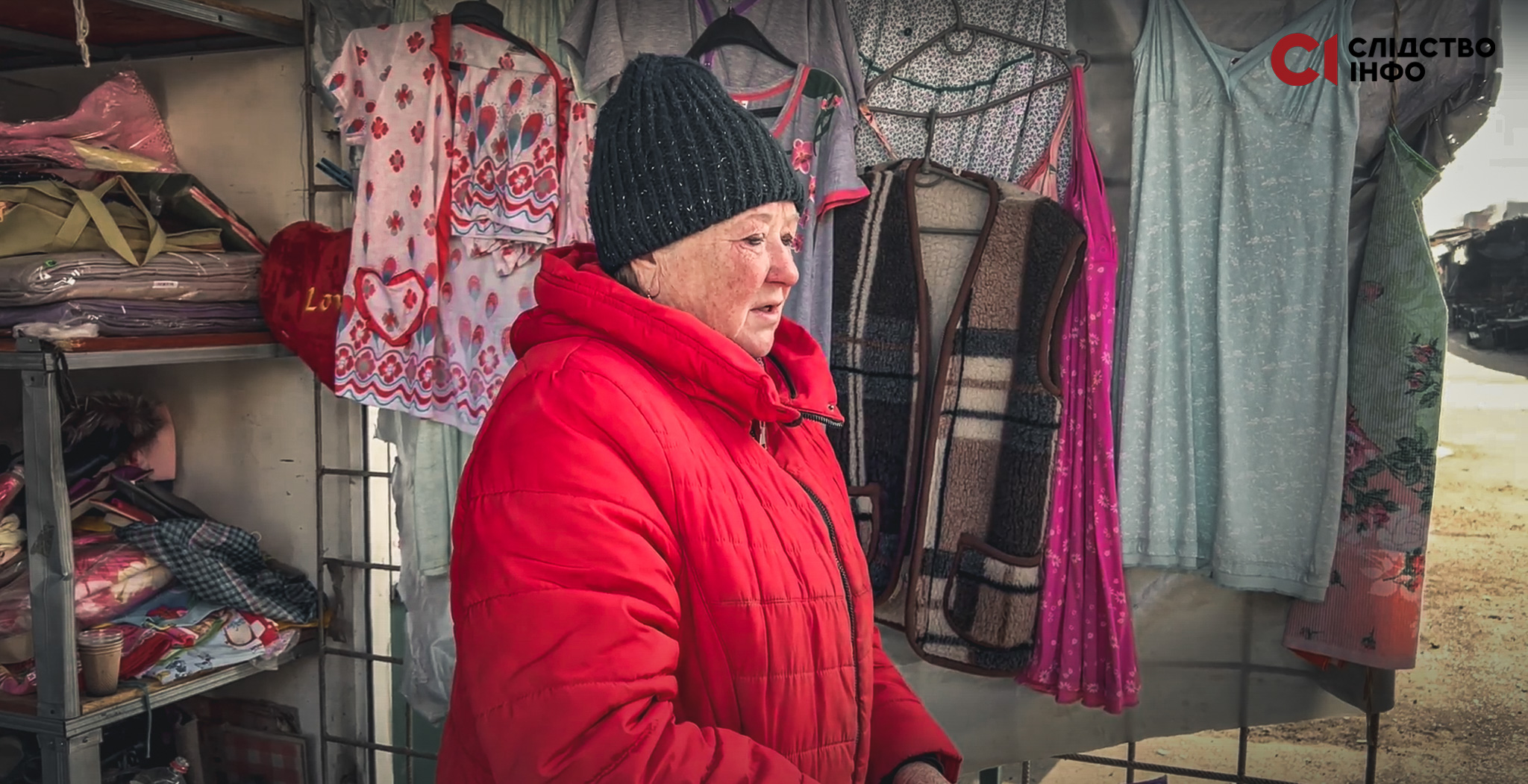 Mrs. Larysa at the market in Bakhmut 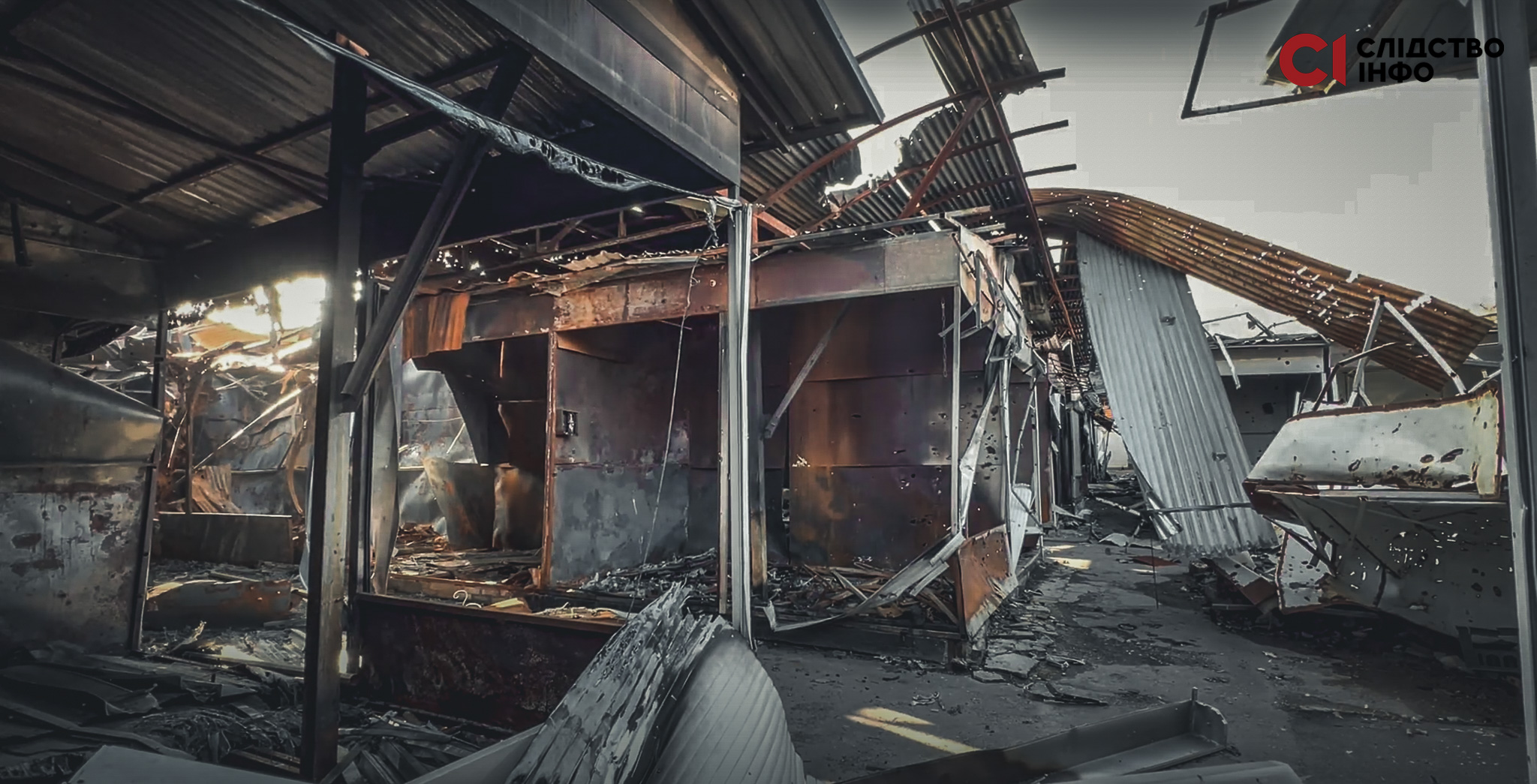 “I’m the only one who is working here, and another stand selling cigarettes, that’s all. There is no one else,” the woman explains.

The asphalt around the woman’s stall has traces of arrivals, but the container itself is intact.

“MY SON WAS WOUNDED, HIS LUNGS WERE PUNCTURED”

The woman continues to “go to work” because here she can rest. At home, her husband, who recently suffered a stroke, needs all her attention and strength.

“My son was also wounded here in Bakhmut, in Kostiantynivka he was operated on because his lungs were punctured. I have no money, so I go to work. I think that at least I can get something and go to my son,” Larysa explains.

There is no communication with her son now, because he got to the hospital without a phone. The woman tried to find him and even decided to leave Bakhmut by evacuation flight, though not for long, but just to find out something about her son.

It turned out that he was transported from Kostiantynivka to Dnipro, and from there to Kirovohrad region. Larysa asked the Slidstvo.Info journalists to record an appeal to her son, so that he knows that the woman does not forget about him. 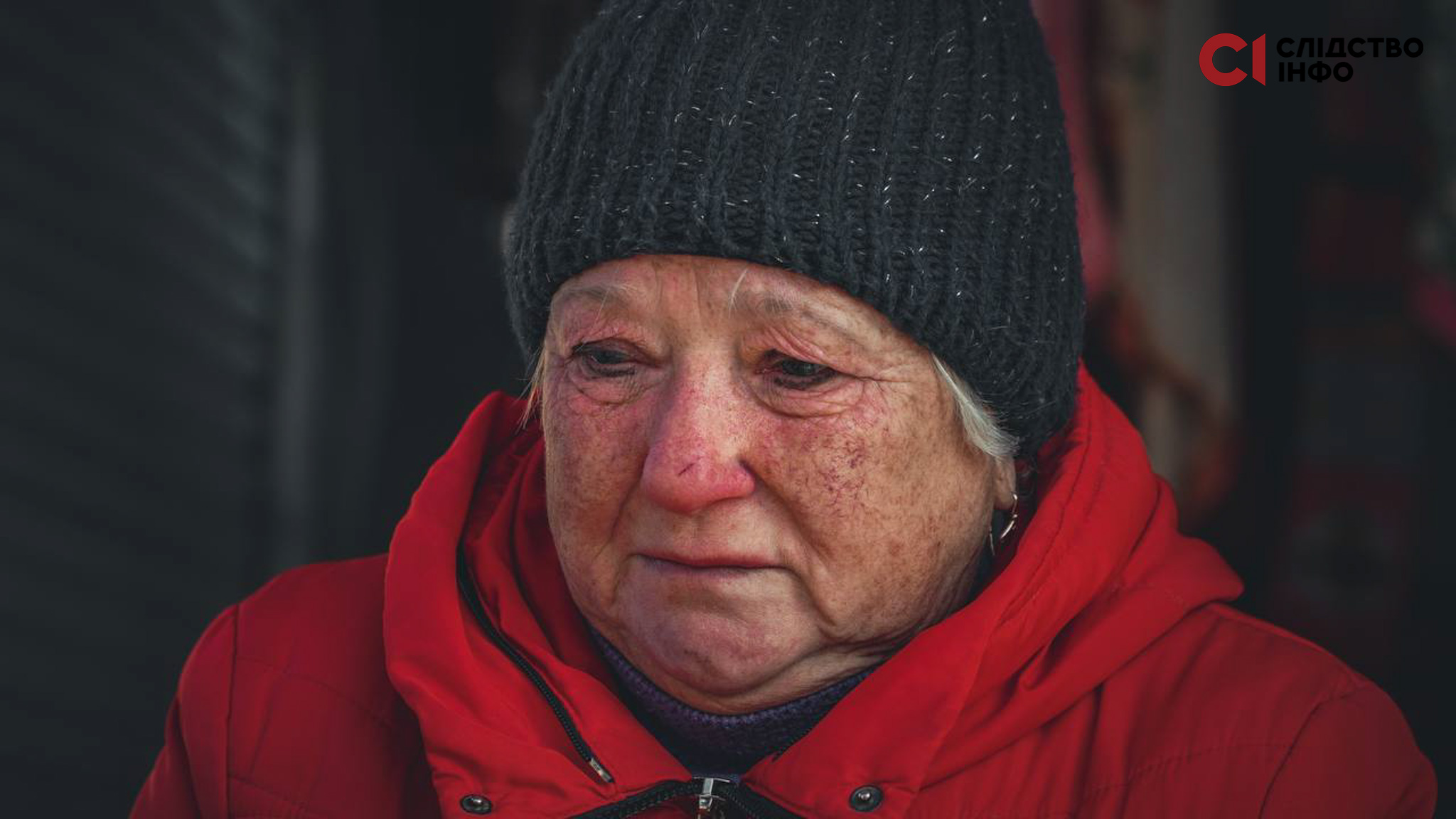 His name is Volodymyr Harifulin. It is because she and her son were left without communication, the woman decided to stay in the city. She says that this way Volodymyr will at least know where to look for her.

She and her husband live in the area beyond the Bakhmutka river. Due to the density of shelling, neither medics, nor volunteers, nor rescuers dare to go there.

The seller explains that she does not even think about leaving Bakhmut, as the bridges are blown up, the dam is being shelled, and her husband practically does not walk after a stroke.

During the conversation with Larysa, the shooting does not stop around. She is the only one among the locals who shudders at every sound. However, she says that she is still calmer at the market, because in the area where she lives, the shelling is even stronger.

In addition, due to the constant shelling, Larysa explains, finding food is now a challenge, because there is nowhere to buy food and nothing to buy, and humanitarian aid is distributed only in the center of Bakhmut.

“Today I even took a loaf of bread (the woman shows one white loaf – ed.), there is canned food and jam at home. I will mix it with hot water and bread… this is all our food,” Larysa says through tears.

“TILL THE END: WHATEVER HAPPENS, WILL HAPPEN”

But despite the constant danger and food shortages, the woman refuses to leave Bakhmut.

“No, I will not leave, I will stay here till the end, whatever happens will happen. I love Bakhmut. I was born here. I think everything will be fine, our army is strong, I love Ukraine and I know that our army will win”, Larysa says.

Larysa assures that she is ready to put up with explosions and almost complete lack of food and amenities, as long as her dream comes true. Above all, the woman wants to contact her son or learn at least something about his condition.

Many residents of Bakhmut, like Larysa, hope that their city will not be occupied by the Russians. However, British intelligence and the Institute of Warfare give completely opposite forecasts. They believe that this town in Donetsk region is the next target of the Russian army.

Russians are now concentrating their main forces around Bakhmut. In addition, experts suggest that part of the troops withdrawn from Kherson will also be redeployed to this area. 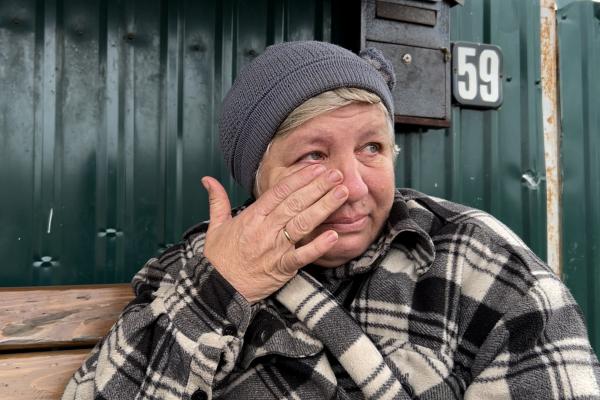