Головна Сторінка » English stories » “A little angel who has seen nothing in this life”. The story of the father whose 2-year-old child was killed by a Russian shell

"A little angel who has seen nothing in this life". The story of the father whose 2-year-old child was killed by a Russian shell 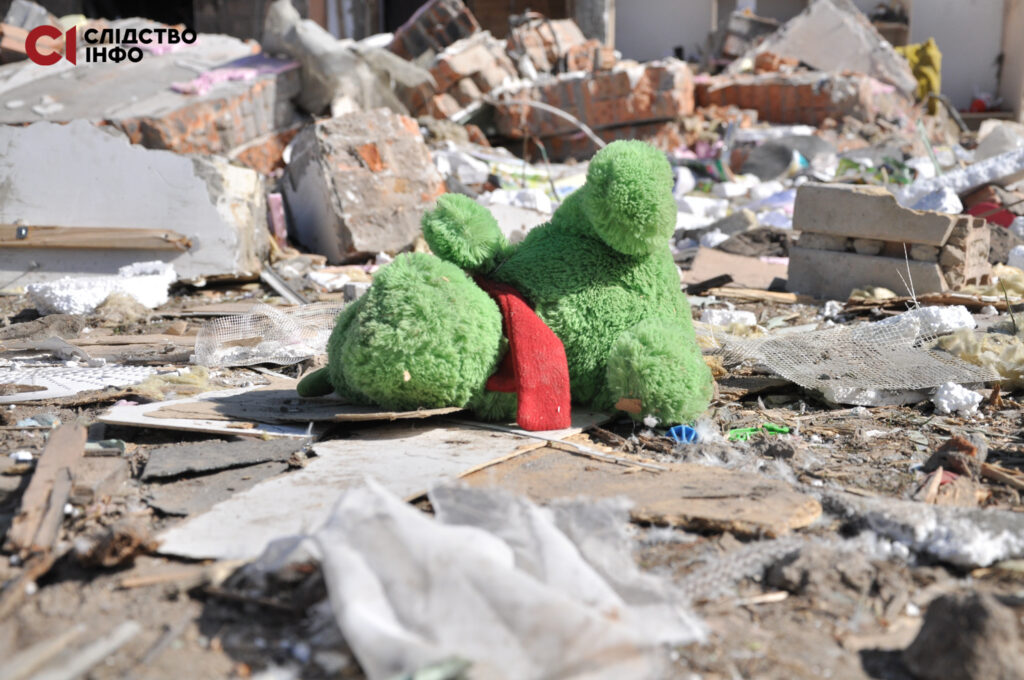 The village of Novi Petrivtsi is located 15 kilometers north of Kyiv – the invaders are struggling to break through the defenses of the capital right from this direction. A few days ago, Novi Petrivtsi was fired at by the Russians – they hit a gas station, and not long before that – a residential building. The shell almost completely destroyed the house where a large family lived – a 2-year-old child died, adults were hospitalized. Journalists of  Slidstvo.Info went to Novi Petrivtsi and recorded the history of this family.

The locals take us to the once nice-looking big house. There are ruins now. This was a place for living of a large family – Oleg, his wife, mother-in-law and four children: two sons and two daughters. The youngest daughter is 3 months old, the oldest is 20 years old. One of the boys is already a student, the other is 2.5 years old. 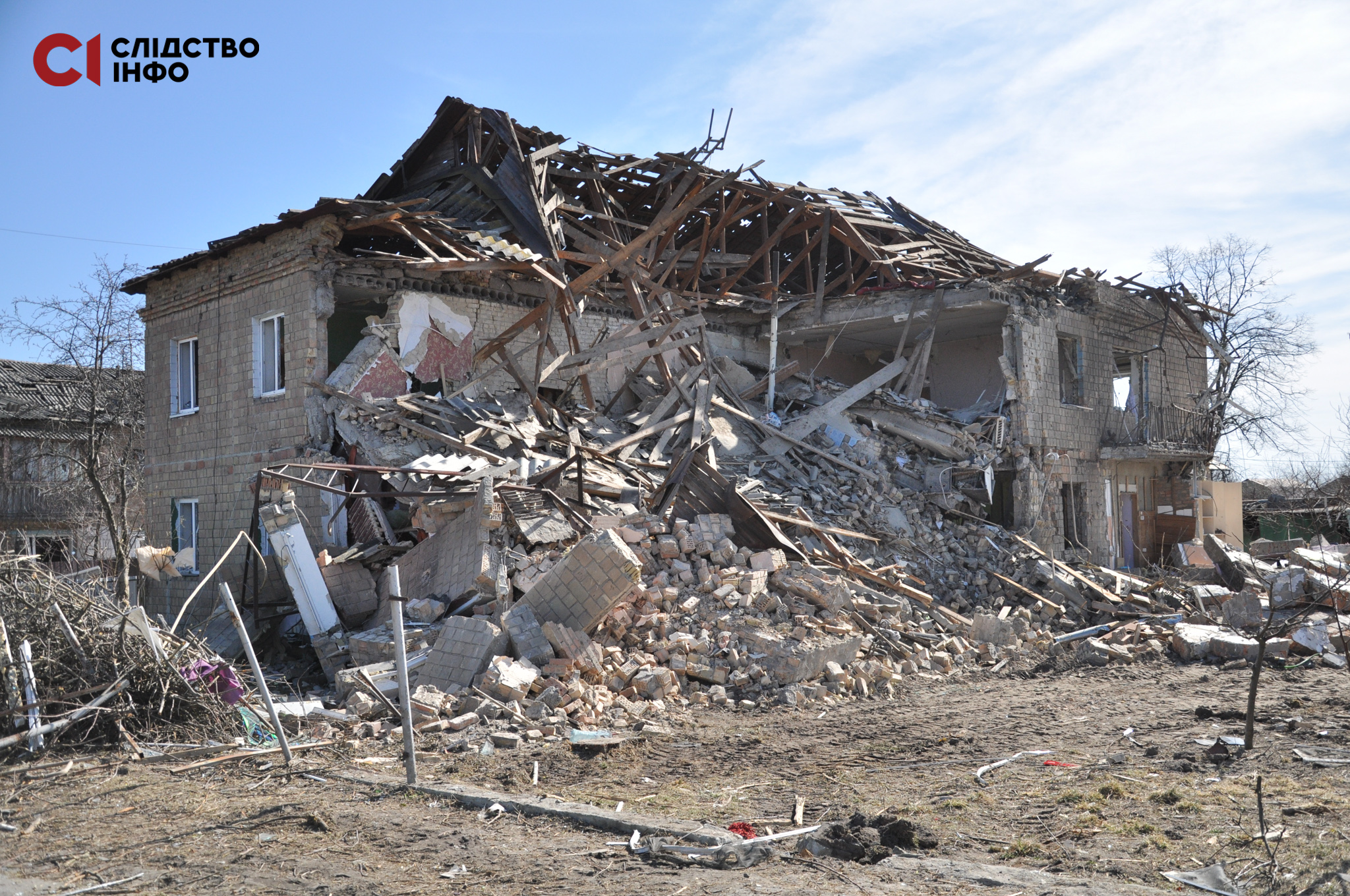 A man is working on the household nearby. He says that he was helping the family to carry out the things that survived – there are lots of children’s books and toys. He carefully packs everything in bags, shakes construction debris from soft toys, folds the surviving clothes. From time to time he enters the house and looks for something, comes back with some new things. It happens again and again. A green toy dinosaur lies nearby among the wreckage of the house. 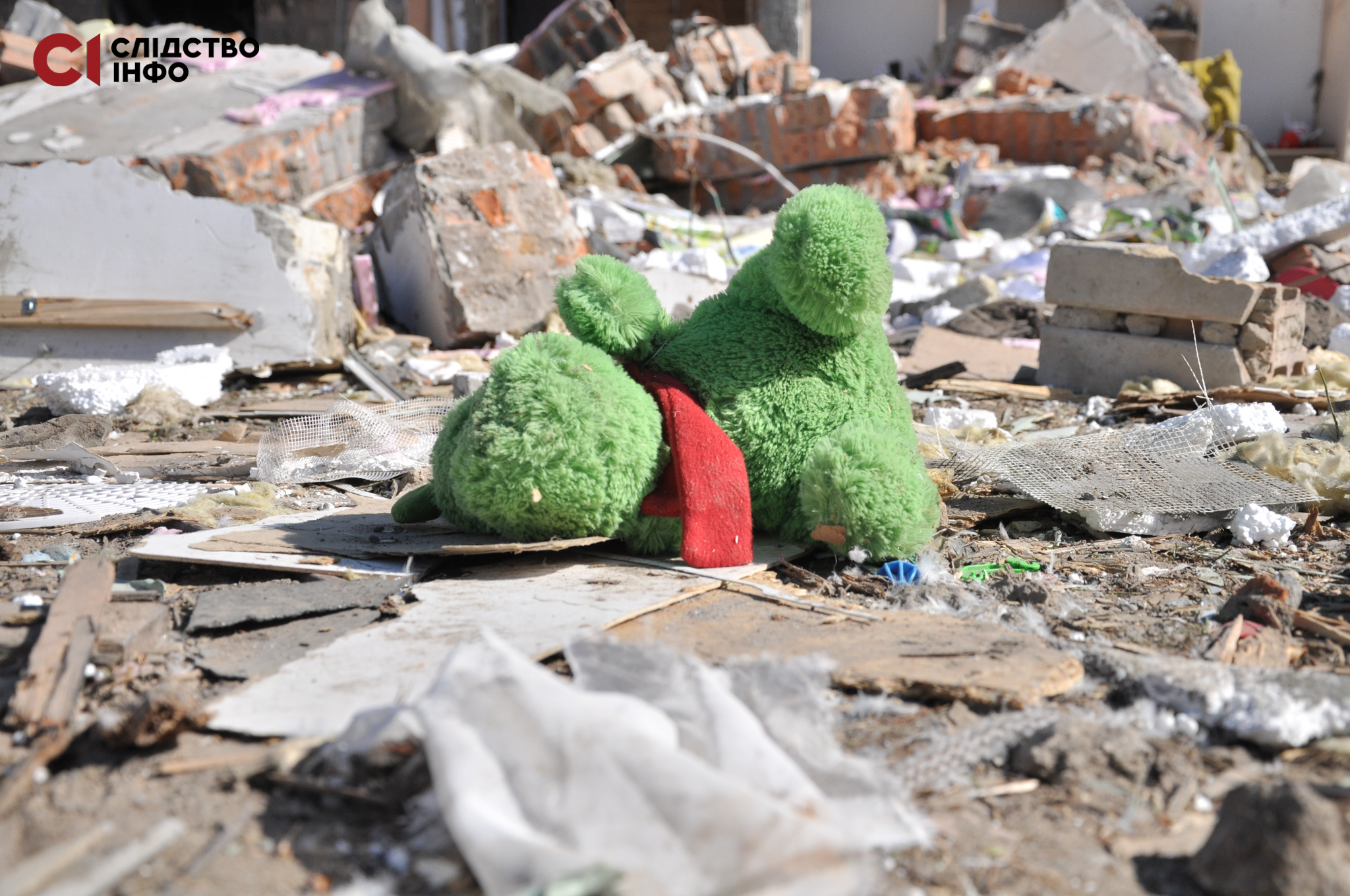 He says that the owner of the house, Oleg, was not there that time, but he would return soon. He says he would tell us how it had happened.

There are piles of construction debris on the territory. Only two rooms survived in the house. In one of them, the door was knocked out – neighbors say that it was this doorpost that had helped Oleg’s wife and their 3-month-old daughter to stay alive. The woman was there at the moment the house was hit by a Russian shell. 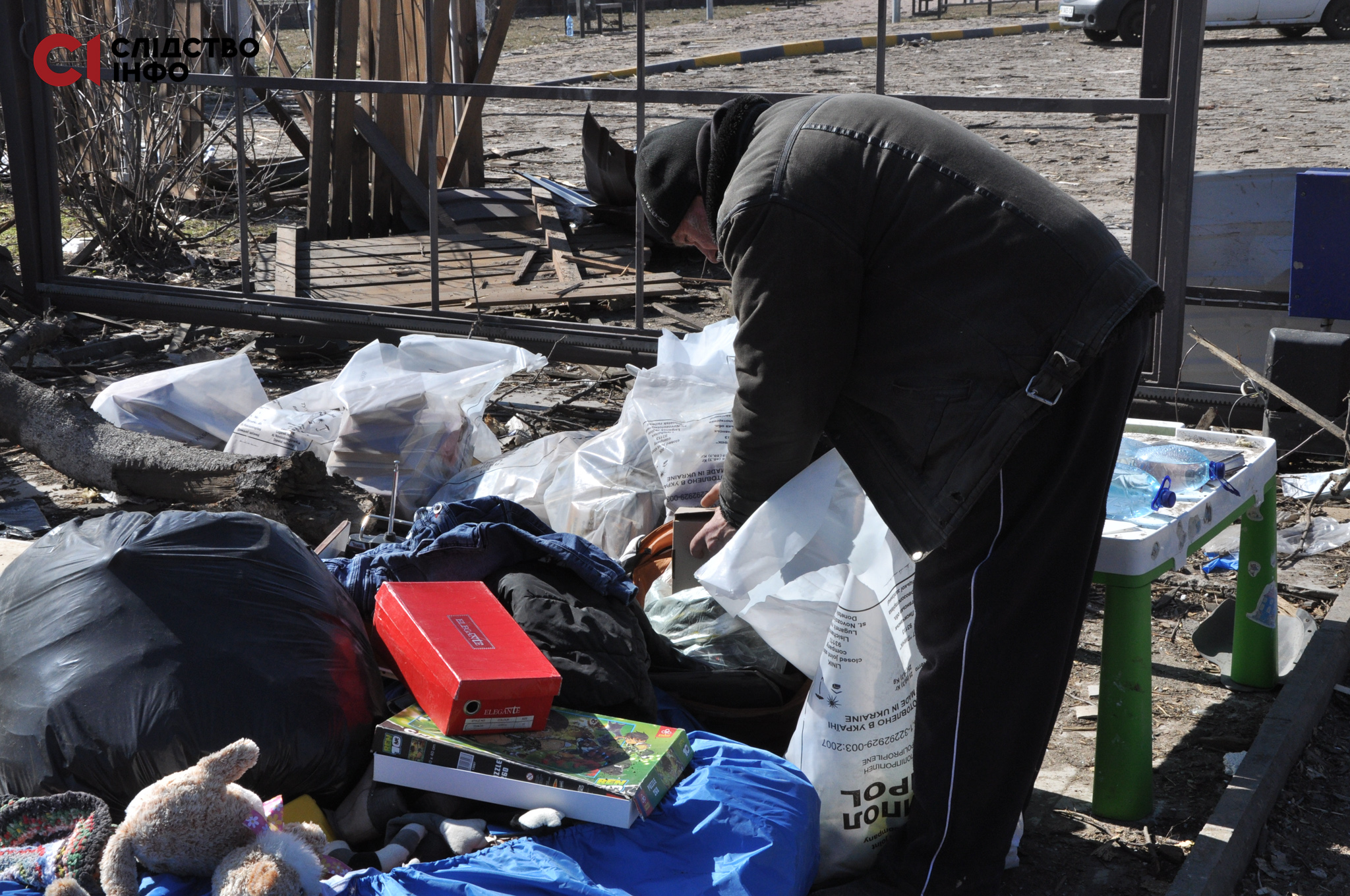 There is practically nothing left of the kitchen and extension. Once large wardrobe with children’s stuff is visible from the street. A huge toy bear peeks out from another closet standing outside the house.

A man enters the yard. The emotions on his face are difficult to read – it has paled because of grief. Next to him is his eldest son Anton, who was in the house at the time of the explosion. Oleg initially speaks reluctantly, but later, after smoking a cigarette, agrees to tell his story. 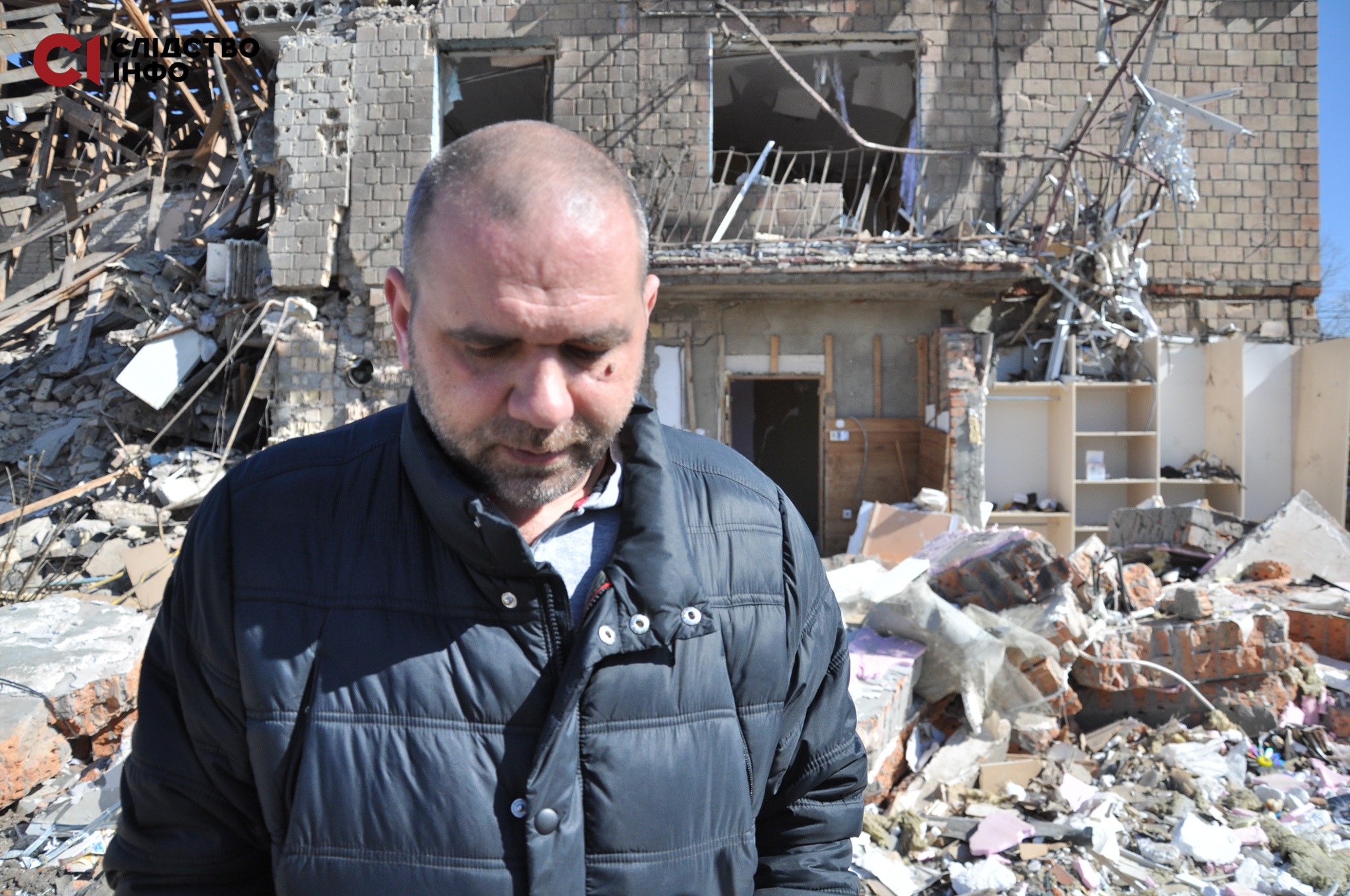 Oleg says that on February 23 he was finishing the renovation. I put the last closet together, screwed the shelves there. It was in a corridor that is no longer there.

“I cut trees, prepared for spring and made the yard looking good. Mother loved to work on the ground: there were bushes, roses, nice grass, the little one had a sandbox, which also does not exist anymore,” he says. 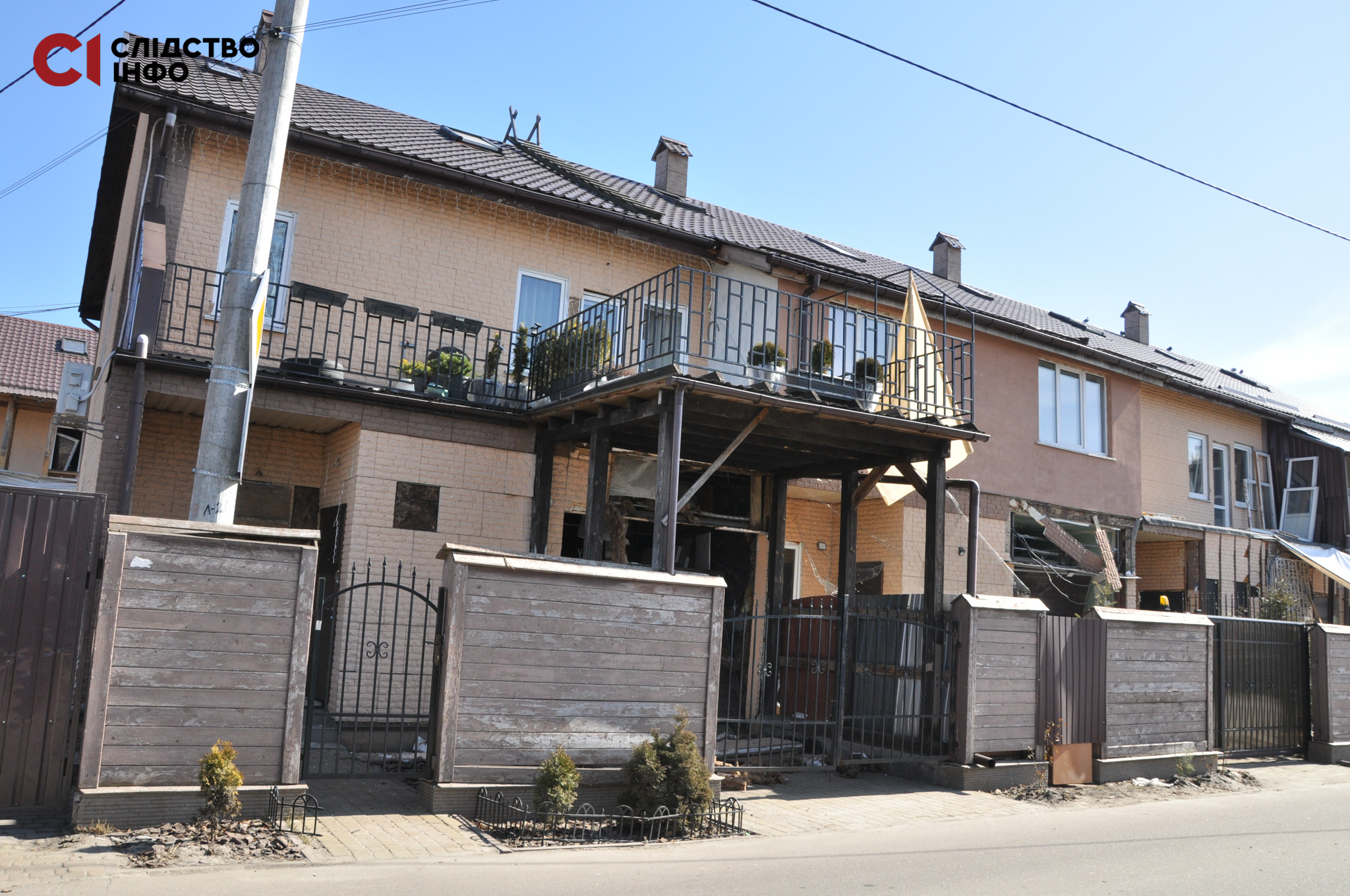 Oleg is an owner of a printing service in a nearby village. On February 24, he was going to go to work at 7 am, but at 5 he was woken up by a phone call from a colleague who said that hostilities had begun. The cannonade was heard from Kyiv and also Irpin, which is about 15 kilometers away.

“We spent 20 days in our house, observing the blackout rule. The child, a son, was already so used to living in darkness and walking with a flashlight to the bath that when the lights were accidentally turned on, he said, «How beautiful. «We tried to live somehow, there were 7 of us.”

On the day when the tragedy occurred – March 14 – Oleg went to work in the morning to open the printing, because the night was quiet. He says he listened to the president, who called on small and medium-sized businesses to work. And the family must somehow be provided with food.

“I hoped that nothing was to hit this part of the house, because all the main battles were taking place near Demidov and Ivankov, Gostomel – they were pushed back there. I did not expect that something would hit this place. Nothing at all.” 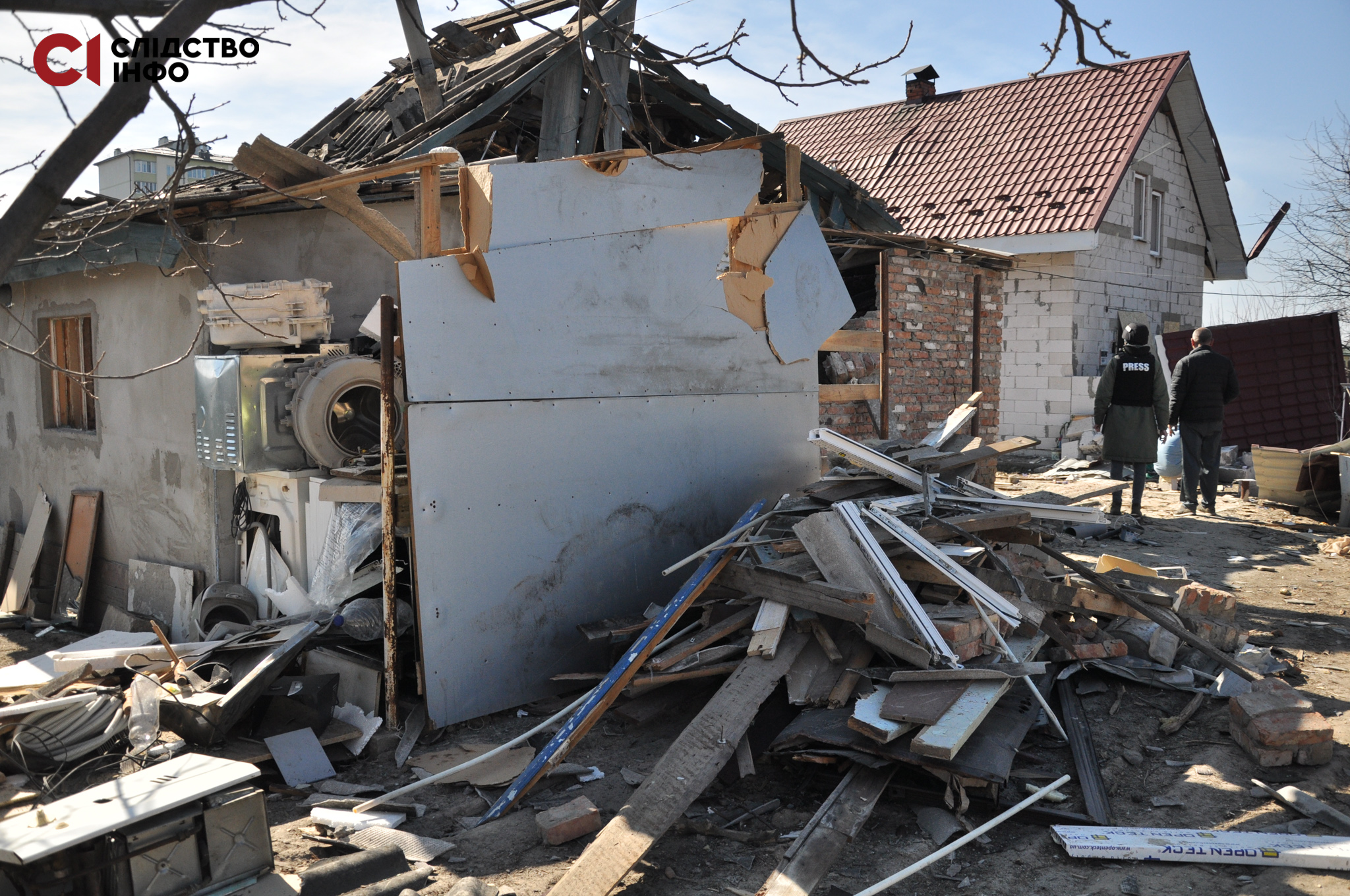 By 2 p.m., he had been calling his wife from time to time and everything was fine.

“They walked down the street, went to the store, bought something. Everything was quiet, calm.”

By the time of the explosion, Oleg’s mother-in-law had put bread in the oven, which is still there in the destroyed house. At 2 p. m. Oleg could not reach any of his relatives.

At first, the man thought that everyone was resting, because the children are still little. But the exhilaration was growing. Then he received a call from his eldest 20-year-old daughter from Fastov. She said that the photos of their destroyed house have appeared online.

Right there, in the place of the wasteland, was a funnel from the shell. There was a gazebo nearby that is also destroyed now. Everything is buried by a Russian shell. The antenna was carried 150 meters away from the house by an explosive wave. Only one of three cats survived, the other two were buried next to the fence by Oleg. 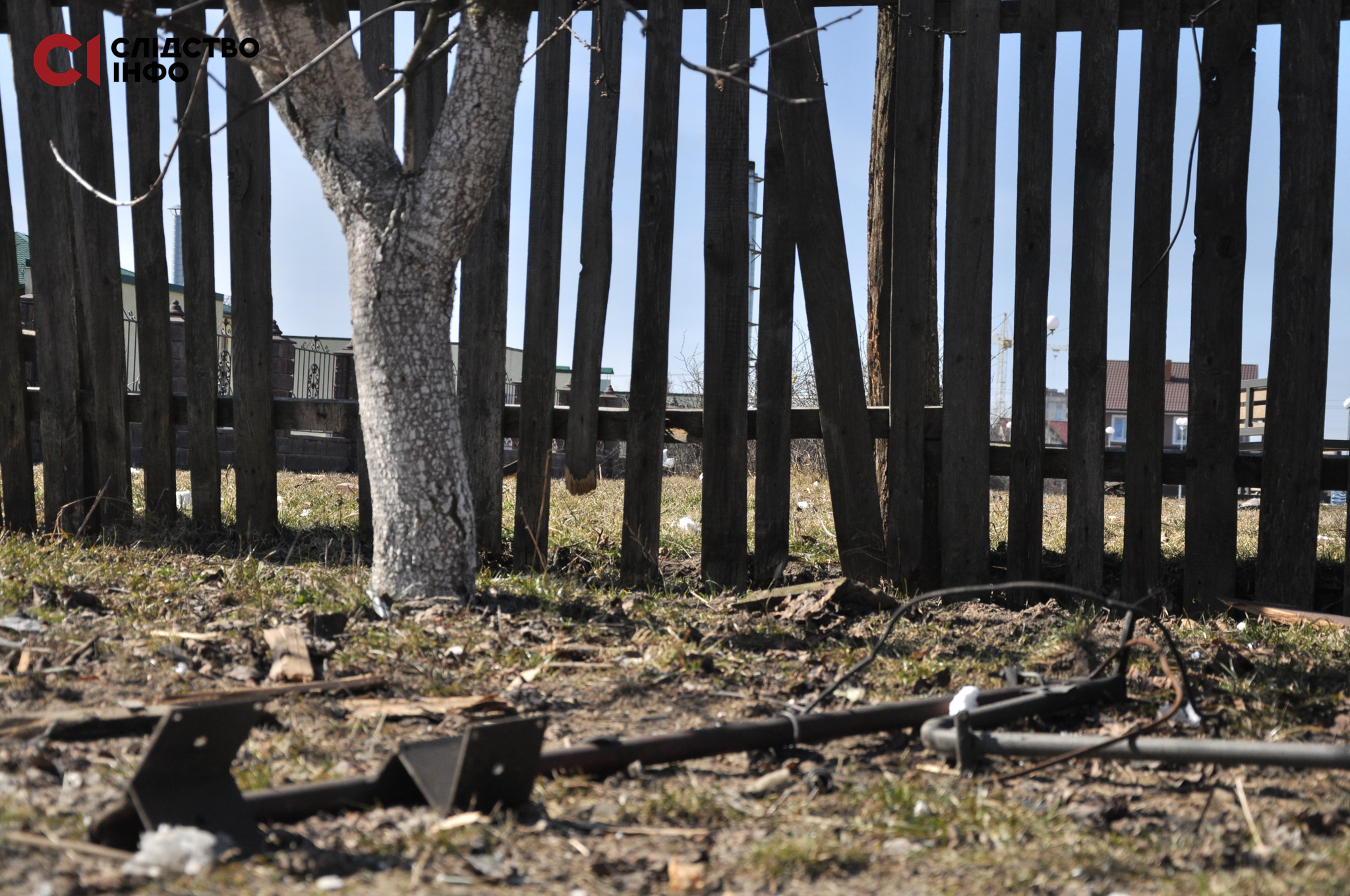 He shows the house, tells us where and what kind of the rooms were there. Here is a completely destroyed kitchen. The refrigerator lies in the middle of it. Here is the nursery of the eldest son, a student. It was hardly damaged. On the doorpost at the entrance to the already defunct corridor – a bloody handprint.

An hour later, the eldest son Anton called his father, he reassured his father that everyone was alive and everyone was pulled out from the ruins. Halfway home, Oleg’s wife called him from someone else’s number and said that she and their daughter were safe, in the hospital.

“She asked me to look for Styopa and said she didn’t know where Styopa was.” 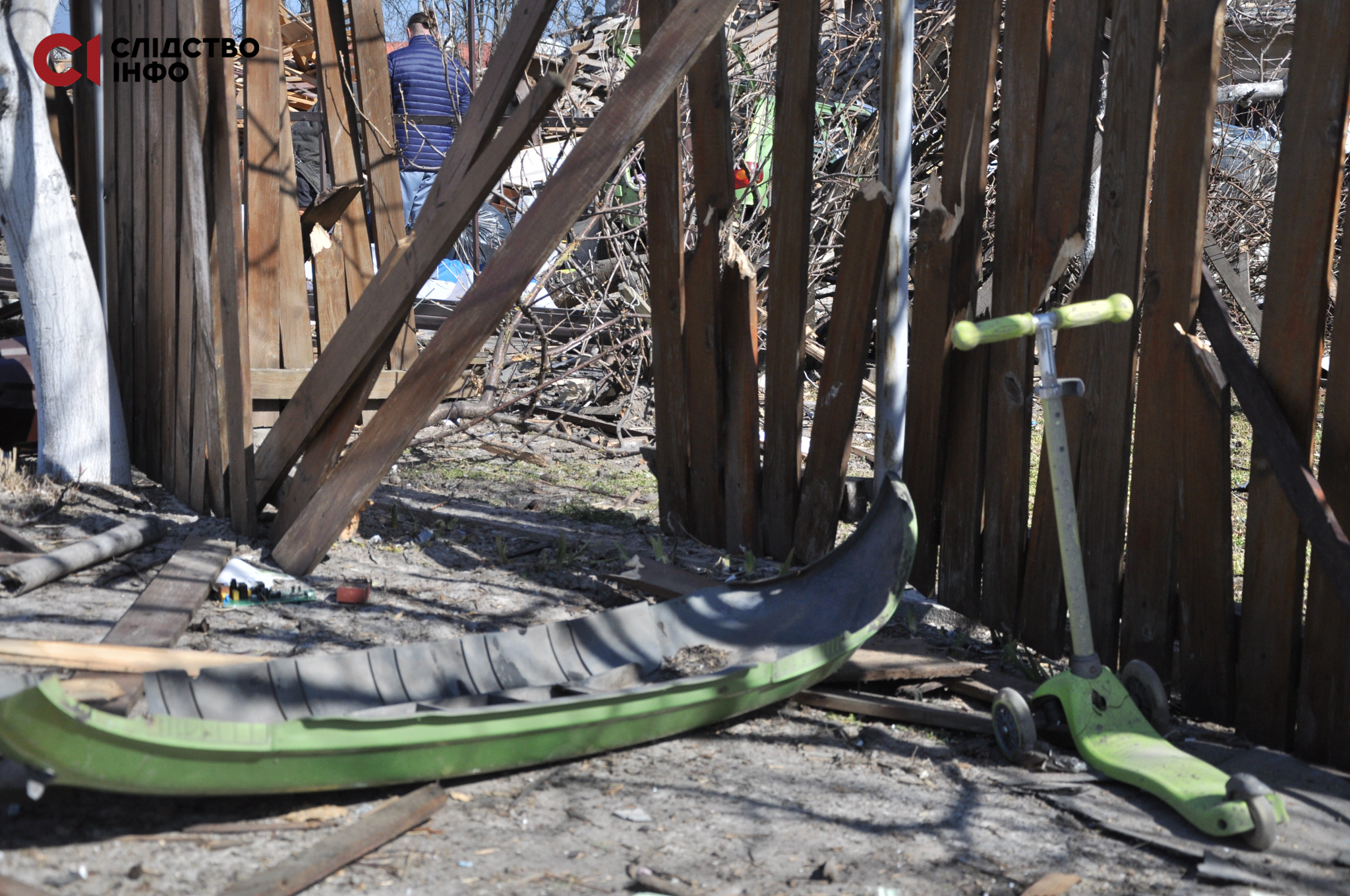 “I came to the hospital. At this point, my wife was already informed that our son was no longer alive. She tried not to believe that, I say, “Let me find out, ask, maybe someone knows something.” I went to the nurse on duty in the children’s department of the Vyshhorod hospital, she took me to the doctor and the doctor confirmed that my son had died. He said that my son was pulled out from the wreckage with an already filamentous pulse, but was not placed in an ambulance, because he had died at the scene from his injuries.”

According to Oleg, the military men helped a lot, while covering the central entrance of the hospital, when the father took his dead son away.

“Bogdan, I don’t know his surname, the man who was the shift supervisor, organized a coffin, a cross, all the necessary things in order to bury the child. My wife’s sister came to the house and took some clothes to dress up our son. I had to wash my child because he was all covered in dust and the remains of sand. I dressed him up, put in a coffin, drove the car to go to the cemetery. We arrived at the cemetery at around 1 p.m. There was a priest, some neighbors, whom I, honestly, don’t even know, my wife’s sister and… buried my son.” The man begins to cry.

Now he is thinking about how to take his family to some safe place. He says there are a few options so far. Rebuilding the house makes no sense, it is completely destroyed. 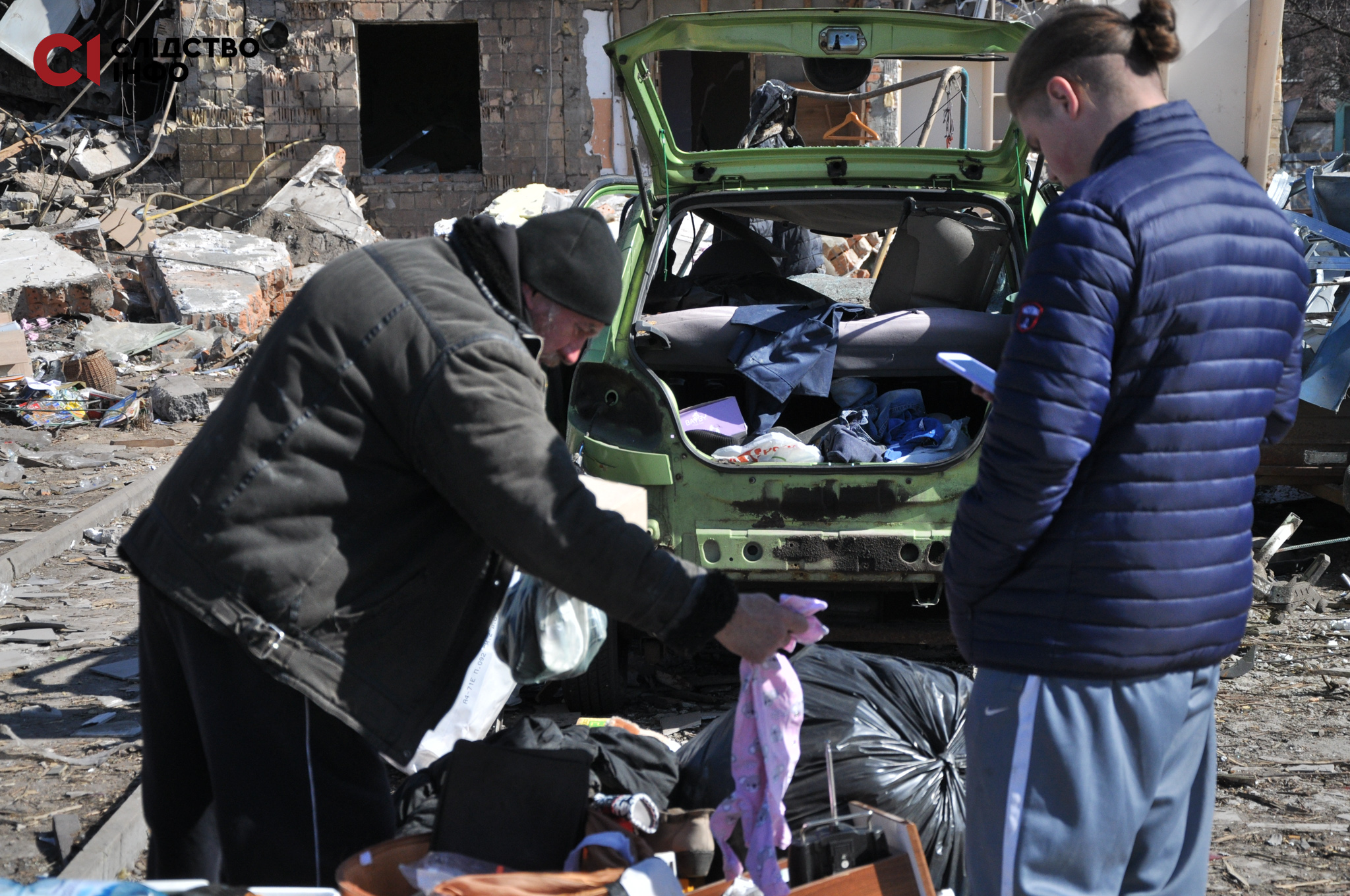 “One meaningless word “war” is to blame, when [Putin] meddles in. And it’s not clear why and it’s not clear where, and… he’s been doing that for eight years. I should have taken them away then, damn…, I don’t know. It touched my family, I lost my son, a little angel who has seen nothing in this life. I don’t even know what I paid for.”

Oleg turns away and cries. He is hugged by his elder son. 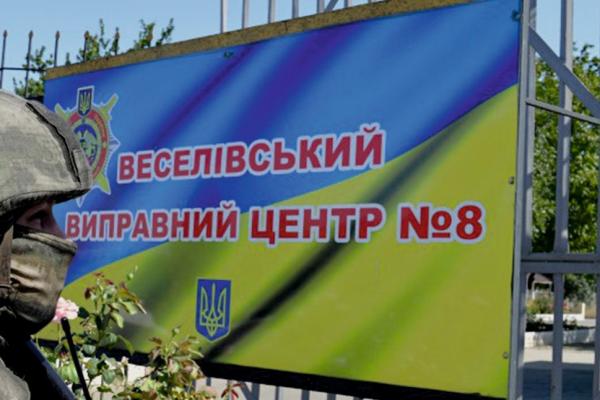