Головна Сторінка » English stories » The Kadyrovites in Ukraine: war Crimes and the whereabouts of the Chechen occupiers

The Kadyrovites in Ukraine: war Crimes and the whereabouts of the Chechen occupiers 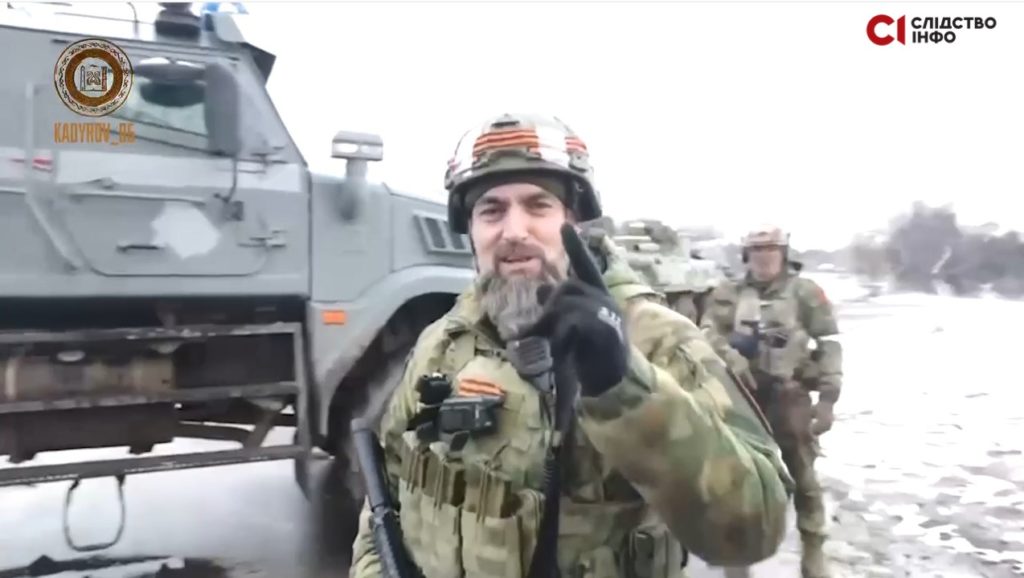 There are many legends about the Kadyrovites, the Chechen militaries serving on Russia’s side. In particular, about their brutality in times of the war. Since the first days of Russia’s attack on Ukraine there have been regular reports of these militants at various locations. However, lots of militaries say the Chechens’ fighting skills are overrated. They are even called “tick-tockers” while they publish videos of themself having “whitened teeth” and driving luxury cars around Ukrainian settlements.

Journalists of Slidstvo.Info have investigated the actions of the Kadyrovites during the war in Ukraine and have established the locations and movements of the Russian occupiers. With the help of some published videos, the journalists have also identified their leaders who are committing war crimes on the territory of Ukraine.

Videos of columns of the Kadyrovites militants moving through Russia towards Ukraine’s border appeared online weeks before the war. According to the Ukrainian intelligence, the Kadyrovites, alongside with other Russian units, began invading Ukraine from Belarus on February 24. There is no exact data on the number of Chechen militants who came to fight against Ukraine. However, intelligence officials believe that there are more than 1,200 of them.

According to the Commander of the Sheikh Mansur Battalion, Muslim Cheberloyevsky, the Kremlin uses “Kadyrovites” mainly for intimidation.

“Putin’s main bet was on them: the Kadyrovites will come, everyone will disperse, and they will take everything at once,” he said.

However, according to Ukrainian intelligence, among the tasks of Chechen militants are also the “cleansing” of Kyiv and the “liquidation” of the President Volodymyr Zelensky. Vladimir Putin allegedly met with Ramzan Kadyrov in person a few weeks before the war and “instructed him how to do the dirtiest work”.

“This information was reportedly provided to the spies by an anonymous source who called himself a «Russian Federal Security Service officer.”

Due to this, the Ukrainian military has managed to destroy the Kadyrovites unit.

A video posted on social media, probably shot in the town of Bucha near Kyiv, shows a local resident pointing at the destroyed column of military equipment and saying: “These are the Kadyrovites.”

The Ukrainian intelligence has officially announced the death of one of the leaders of the Chechen militants, the commander of the 141st Special Motorized Regiment “North” Magomed Tushayev. However, Kadyrov denied this information. He has so far acknowledged the deaths of only two of his militants. At the same time, there are reports that a large number of ethnic Chechen’s corpses have arrived in Belarus. Therefore, the real losses of the Kadyrovites can be hidden. 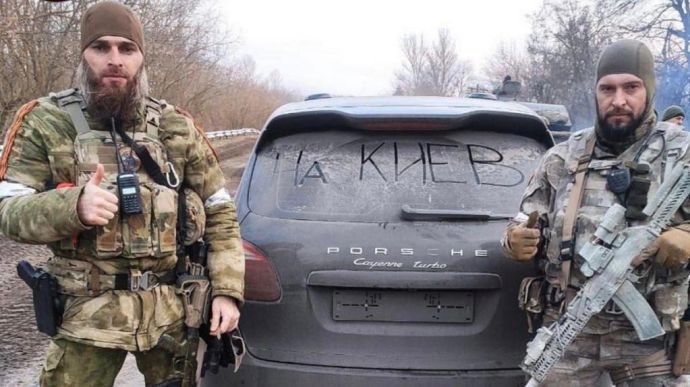 It may be that after an unsuccessful attempt to occupy Kyiv in the first days of the war, the Kadyrovites were given another task: to form “barricading detachments” near Kyiv that would prevent Russian soldiers from retreating – Fedir Venislavskyi, a member of the Verkhovna Rada Committee on National Security and Defense.

THE CHECHENS OR THE “KADYROVITES”

The history of Chechnya is complex and tragic. The republic survived two wars, defending its independence: in the 90s and in the early 2000s. In the end, the Russian Federation won and the Chechen Republic became part of it.

Despite the fact that the Kadyrovites are Chechens by nationality, they should not be equated with all Chechens. The difference was explained to the journalists by Muslim Cheberloyevsky, the Commander of the Sheikh Mansur Battalion.

“Of course, we are embarrassed when they say: the Chechens attacked Ukraine, the Chechens came. The Chechens did not come or attack. Never in history have the Chechens been hostile to Ukraine. And it will not. Those who call themselves the Chechens are freaks… And we, the purebred Chechens, are really a bit sorry. Chechnya, fighting Russia in two wars, lost 300,000 inhabitants out of one million! Another 300,000 people have left and live outside Chechnya now. These are the Chechens who can call themselves the real Chechens. And these freaks are Putin’s supporters,” he told Radio Svoboda.

From the very first days of the war, the Kadyrovites began publishing videos of their militants in Ukraine. According to journalists, most of them were filmed in the settlements located northwest of Kyiv.

Thus, on February 26, Ramzan Kadyrov’s Telegram channel posted a video of the Commander of the Chechen Battalion “South” Hussein Mezhidov removing the Ukrainian flag from the gate of some military unit in Hostomel and hoisting the flags of Russia and Chechnya there.

This unit is located near the Hostomel airport, around which fierce fighting took place on the first day of the war. The same day, some videos of the Kadyrovites demonstrating “trophies” (military equipment and ammunition) were published. At the same time, the Armed Forces of Ukraine stated that the Kadyrovites had entered the territory of the already empty unit and there were no battles for it. 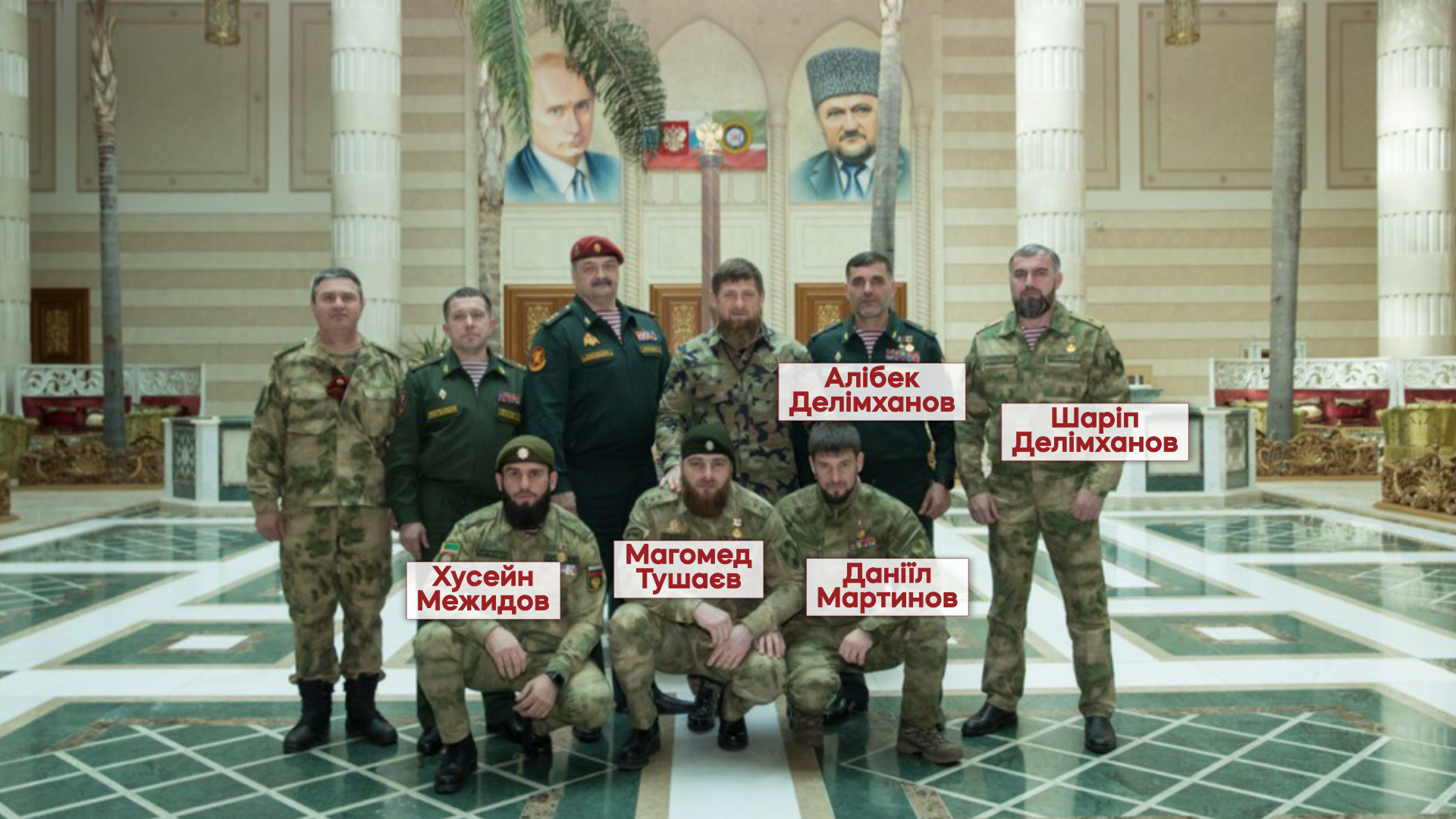 Investigating the videos published on the Internet, the journalists found another confirmation of the presence of the Kadyrovites in Hostomel. In particular, on the territory of the so-called “military town”. This complex was built in the 30s of the last century and for many years it was under the control of the Ministry of Defense. But now it is the place of living for the civilians. The town is located near the airport and the military unit the Kadyrovites hoisted Chechen flags to.

After investigating the released videos, Slidstvo.Info found out that the militants have established themselves in this military town and are even holding hostages there. In the video, the militants show that they are allegedly protecting civilians and are generally very friendly to them. However, according to locals, the behavior of the militants changes as soon as the camera turns off. 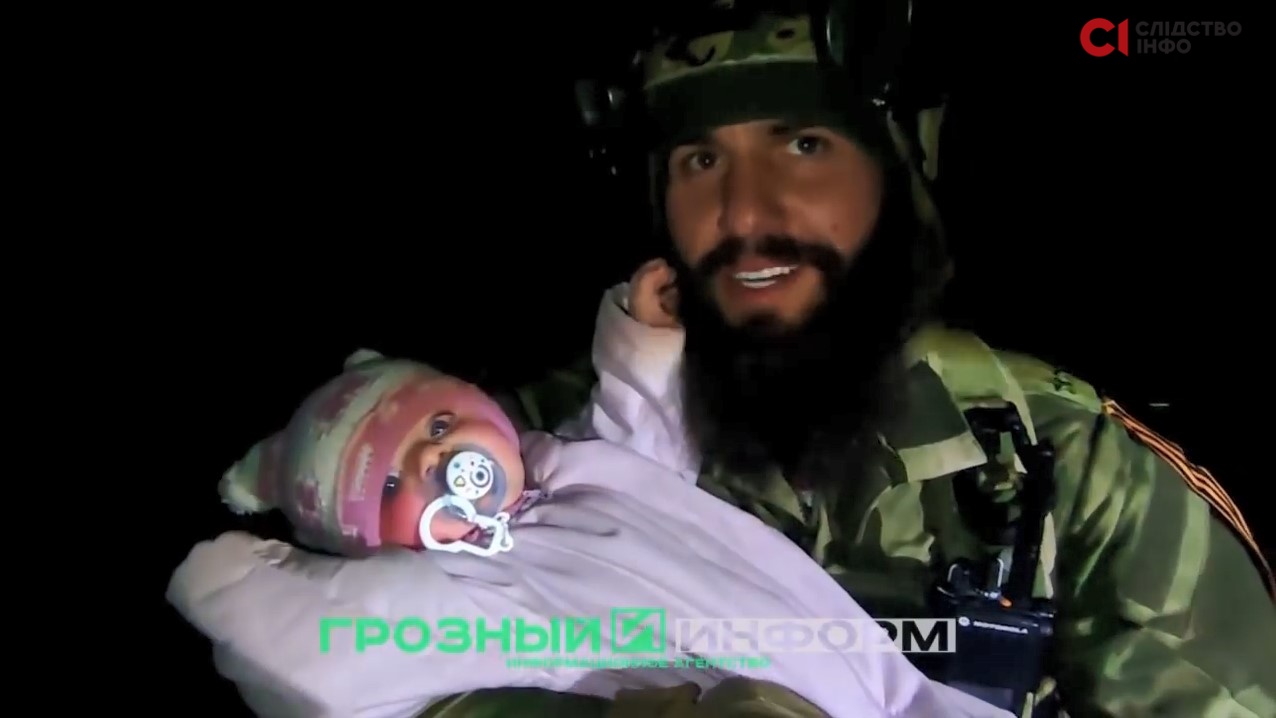 “People in the basements, filmed being fed, helped, but in fact are held hostage in the basement so that the military town is not being bombing. And they are in houses, in these apartments. They have their own checkpoint. They are in the military town and are constantly monitoring it,” Rostyslav Skurativskyi, an Adviser to the deceased Mayor of Hostomel, told Slidstvo.Info.

According to him, the residents of Hostomel found themselves in a critical situation: “In fact, people have been in the catastrophe there for probably ten days. There is no food, no water, nothing.”

On March 7, the Mayor of Hostomel Yuriy Prilipko was probably killed by snipers from a house in the Pokrovsky residential complex in Hostomel. He was the one who delivered food and medicine to the locals. As Slidstvo.Info journalists found out, Prilipko’s body was mined after the murder – it was obvious that people who were to come and pick up the body would also die. At the time of the Mayor’s assassination, Hostomel has already been occupied by the Kadyrovites.

OTHER SETTLEMENTS NEAR KYIV

Journalists also found the evidence of the presence of the Kadyrovites in some other settlements near Kyiv, namely, the village of Borodyanka, which is 30 kilometers away from the capital. This settlement was severely damaged by air strikes of the occupier. 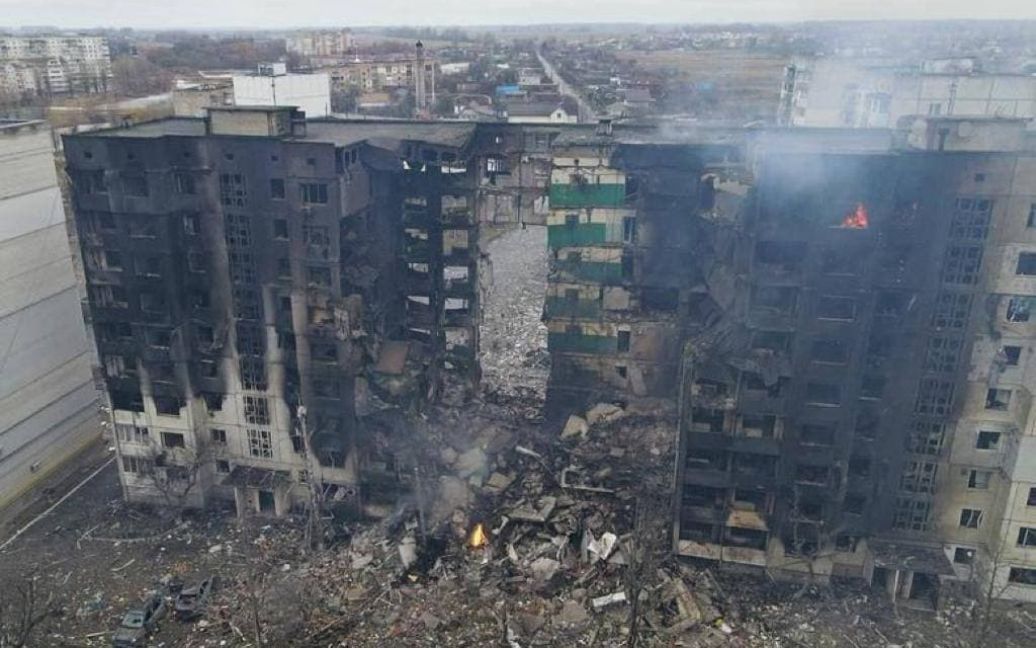 In one of the videos, journalists identified the Commander of the Chechen OMON (Riot Police), Anzor Bisayev, who was driving through the streets of Borodyanka accompanied by militants. In addition, a video, in which militants, including Bisayev himself, hoisted their flag over the Borodyanka Police Station, appeared on Kadyrov’s Telegram channel on March 4.

In addition, Slidstvo.Info noticed the Kadyrovites in a video taken in the village of Babyntsi, near Borodyanka. 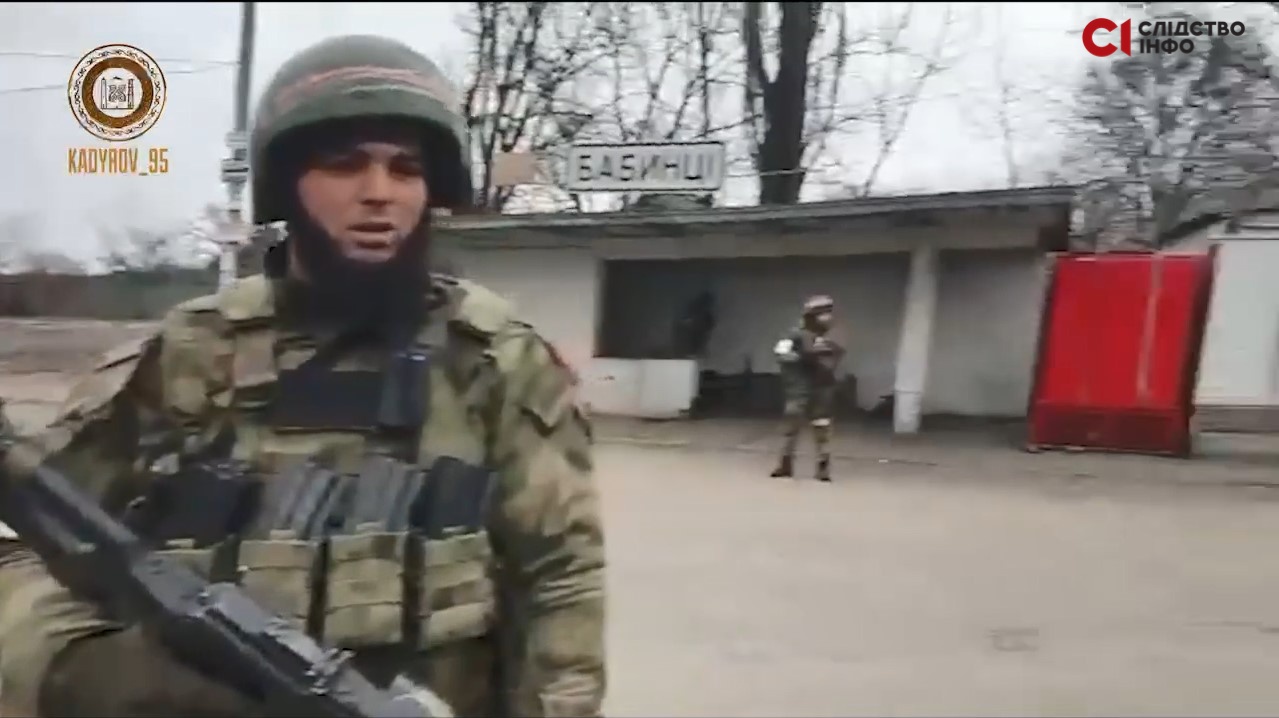 Journalists also received evidence that Chechen militants may be in the village of Vorzel near Kyiv. Lawyer Ihor Chudovskyi, who has recently managed to leave and also evacuate three families, told Slidstvo.Info about this. The man also told about the war crimes of the Kadyrovites in the village.

“The day before yesterday (conversation took place on March 9 – ed.), three civilians were shot dead in the Kvitkovy district. Plus, 65-year-old man was shot – he went outside to smoke,” he said.

The wife of the boxer, Oleksandr Usyk, Kateryna wrote on Instagram that the Kadyrovites were shelling houses in Vorzel.

As a representative of the Bucha City Council told Slidstvo.Info (the name is not mentioned for security reasons – ed.), there were no Kadyrovites in the territory of Bucha, which borders on Vorzel and Hostomel. However, there are other units of the occupying forces in the city. As the occupiers tell the locals that they are really lucky that the Kadyrovites did not come there, because they “have no restrictions”. They shoot civilians for whim, destroy residential buildings and act a lot against the civilian population, said the City Council Spokesman. 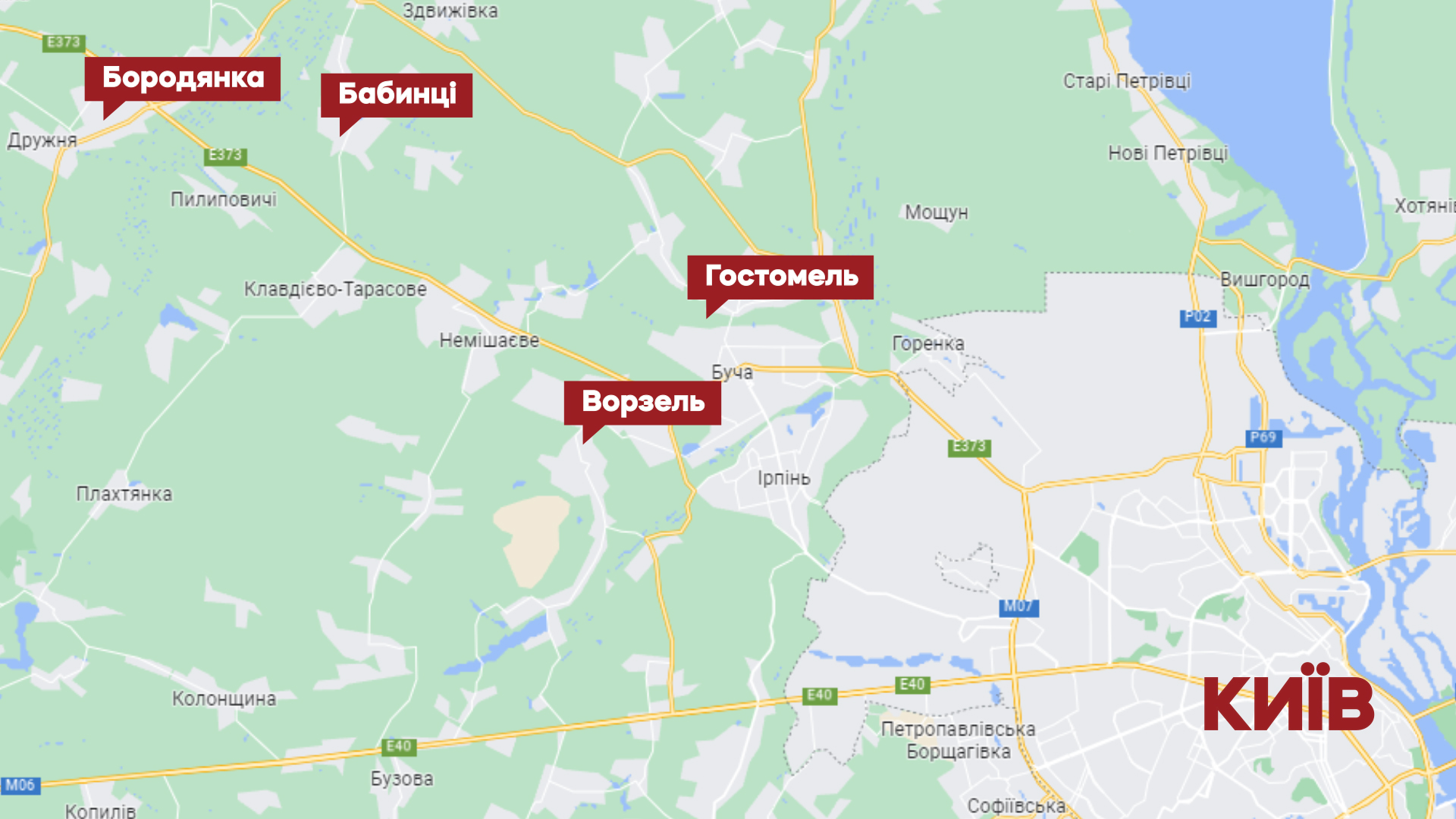 In addition to the mentioned Kadyrov’s leaders, the journalists also identified the Head of the Rosguard Department for the Chechen Republic Sharip Delimkhanov and Ramzan Kadyrov’s aide behind the power bloc Daniil Martynov in the videos from Ukraine.

In his Telegram channel, Kadyrov reported that another militant leader, the Deputy Commander of the North Caucasus District of the Russian National Guard, Major General Alibek Delimkhanov, was in Ukraine. However, journalists have not been able to confirm this information yet. 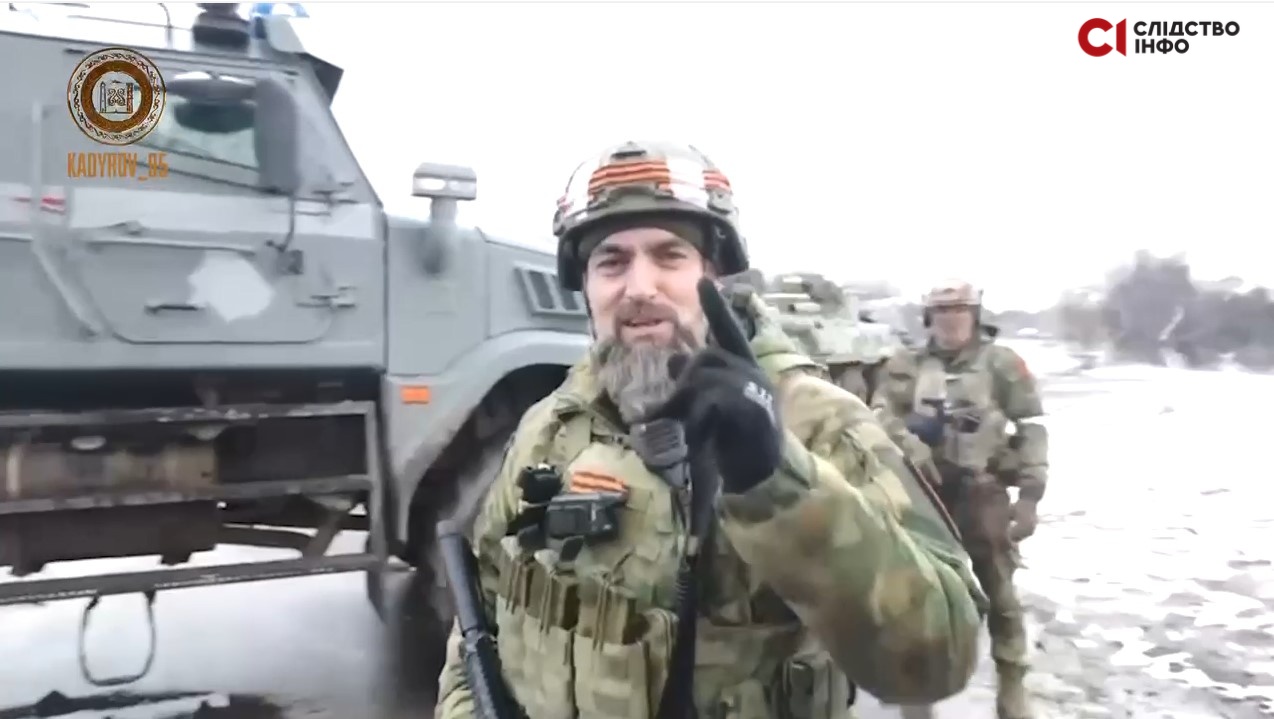