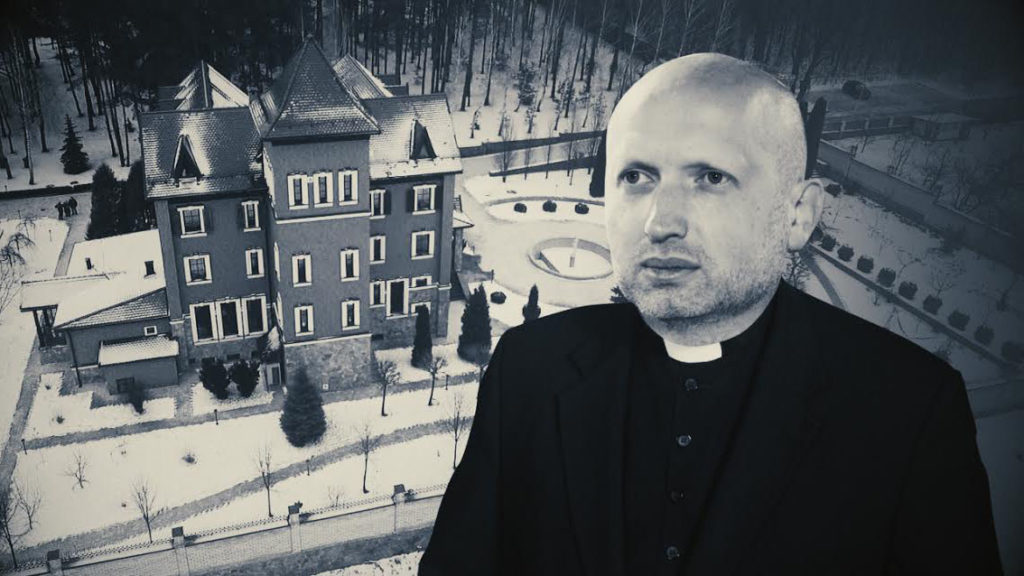 Oleksandr Turchynov – active participant of the Revolution of Dignity, acting president during the hardest times for the country, the secretary of National Security and Defense Council and the nightmare for the Russian propaganda, whom they call «Bloody Pastor». His electronic declaration stands out of hundreds moneybags in authority with its relative modesty. Bank deposits and dollars in cash, expensive but the only car as well as expensive but the only apartment. However, has he declared all the fortune of the Turchynov family? 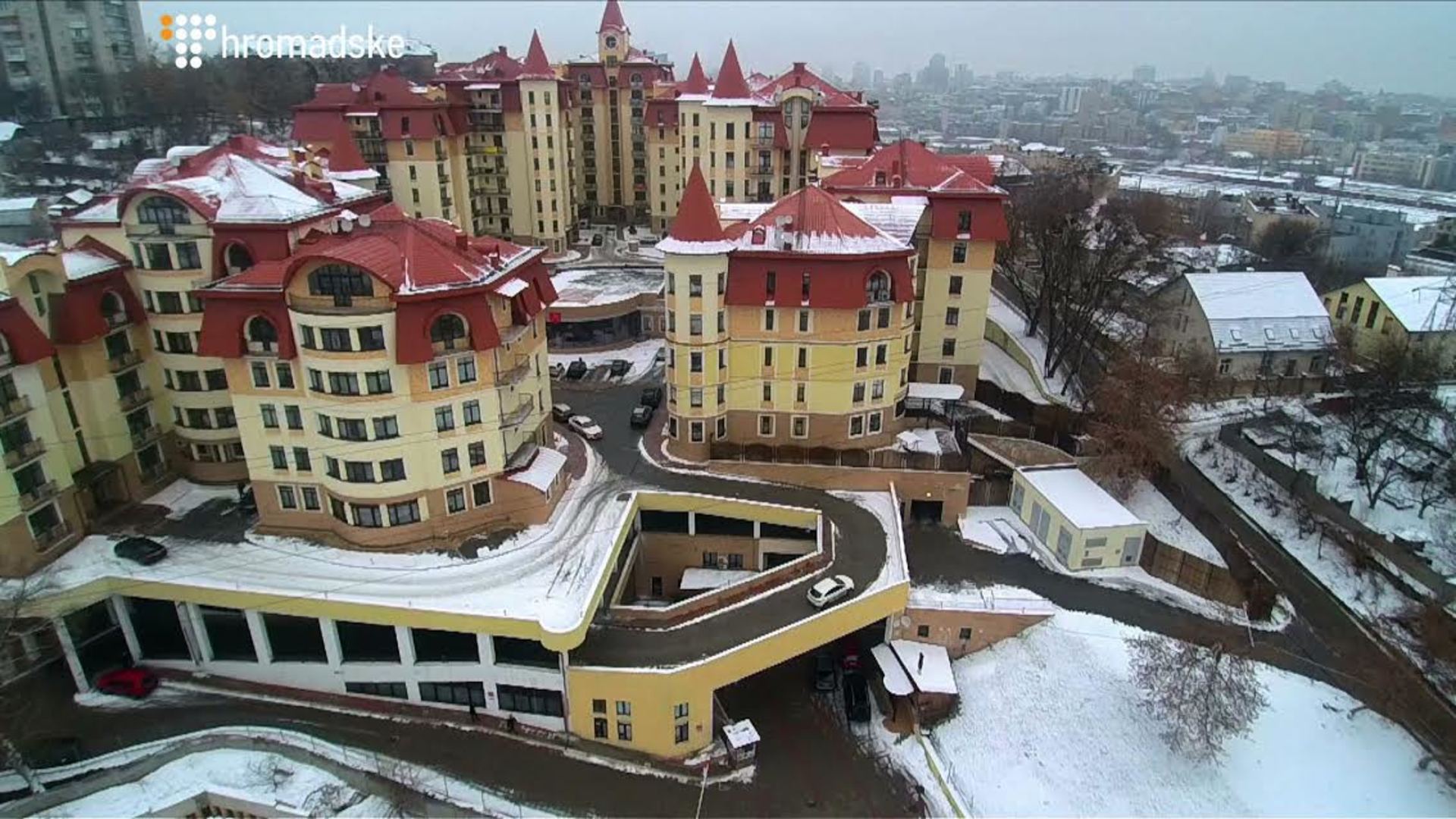 Journalists know really well where the indicated in the Secretary’s declaration apartment is situated – 8, Protasiv Yar str. It is the housing complex «Alpine», where the family of the Defence Minister Arsen Avakov lives, and also the ex-head of Security Service of Ukraine Valentyn Nalyvaichenko. Turchynov’s family owns the apartment of 382 square meters. Officially it belongs to the politician’s wife Hanna. 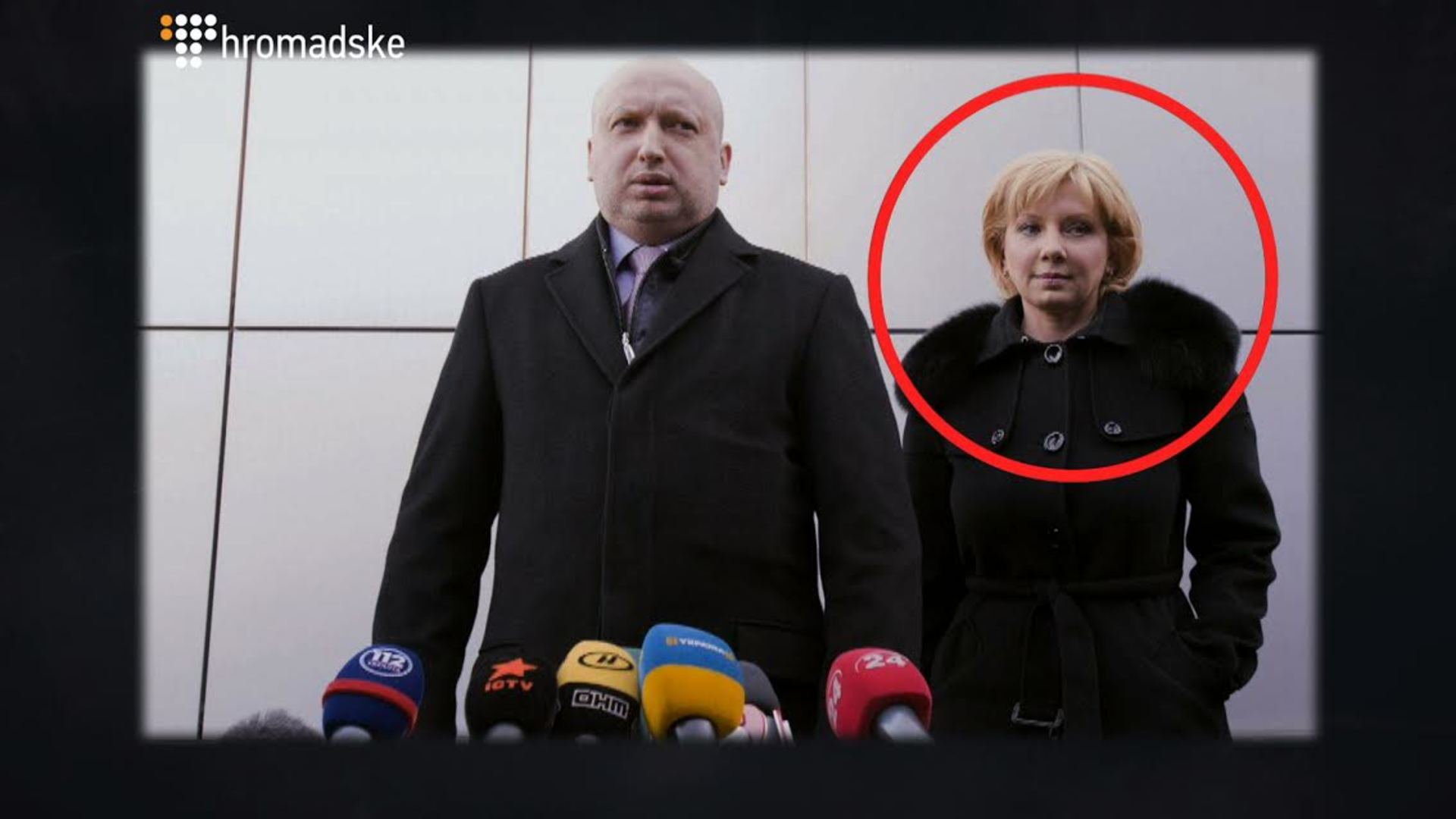 In 2014 journalists tried to visit the acting at that time president. Everybody wanted to be the part of this event from the headship of the National Police of Ukraine to Turchynov himself and his mother-in-law Tamara Belyba. 73-year-old woman reacted very emotionally to the questions about the apartment:

It’s interesting – have all the employees of the YUZHMASH become successful businessmen who own lots of property or only the ones whose son-in-law is an influential politician? 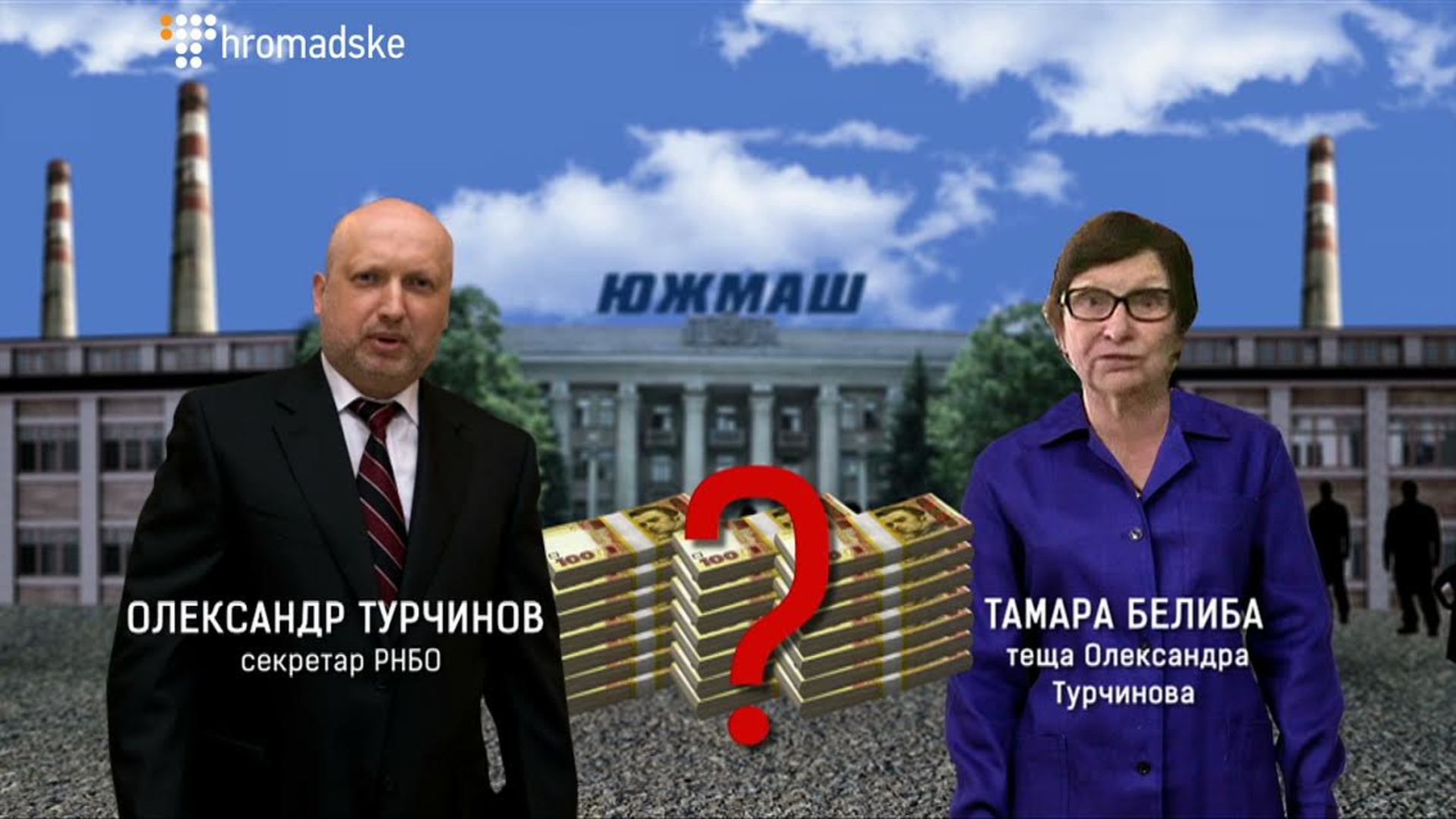 Bilohorodka is a small village near Kyiv. This is where we found something that interested us a lot.  Specifically – this mansion. It has an area of more than 1000 square meters, almost half a hectare of the territory, service staff and security.

2 years ago Oleksandr Turchynov’s mother-in-law guests in «Alpine», now she can do it here. The mansion and the land beneath it belongs to recently registered firm «Ecostylcom». The final owner of this firm is Tamara Belyba.

Mrs Belyba isn’t the only one to be proud of her new mansion. Her 23-year-old grandson and Oleksandr Turchynov’s son Kyrylo now also has his own country house with the forest around it. In the same place, in Bilhorodka. It stands back to back to Belyba’s mansion. Young activist of youth wing of his father’s party «Narodnyi front» got the house in early 2016. 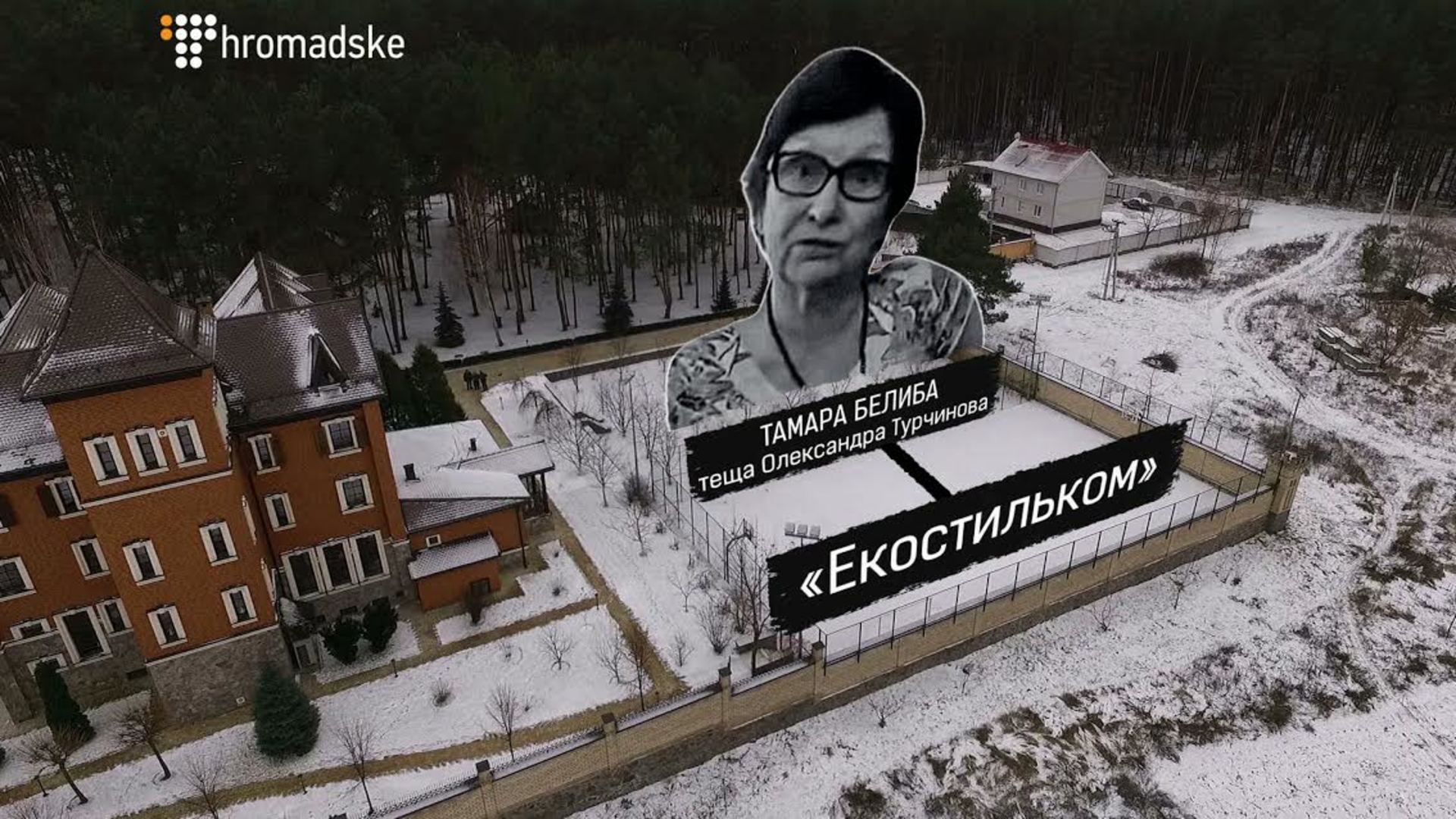 The presenter – grandmother but the other one – Turchynov’s mother Valentyna. In addition to the house Turchynov- the junior was presented the considerable territory around it. You can see it in the video, it is fenced. Having enjoyed his own piece of forest, the grandson can visit his grandmother – the territory is unified by the convenient stairs.

Of course, you will find nothing in the declaration of the official. Mother-in-law isn’t supposed to be mentioned here and the son is adult and independent. Meanwhile, we should explain how the influent politician and his relatives got their fortune. After the continuous negotiations with the press service Oleksandr Turchynov agreed to give an interview:

«Before being engaged in politics I systematically worked in science and business. I am a PhD in economics and I consider myself a good expert in practical economy, in particular in financial consulting. A few enterprises were established, that I ran, they consulted a lot of very respectable people. Moreover, when you take my declaration for the period of last 3-5 years you will see that I declared a bigger sum of money in Ukrainian banks than I showed in total both on deposit account and in cash” 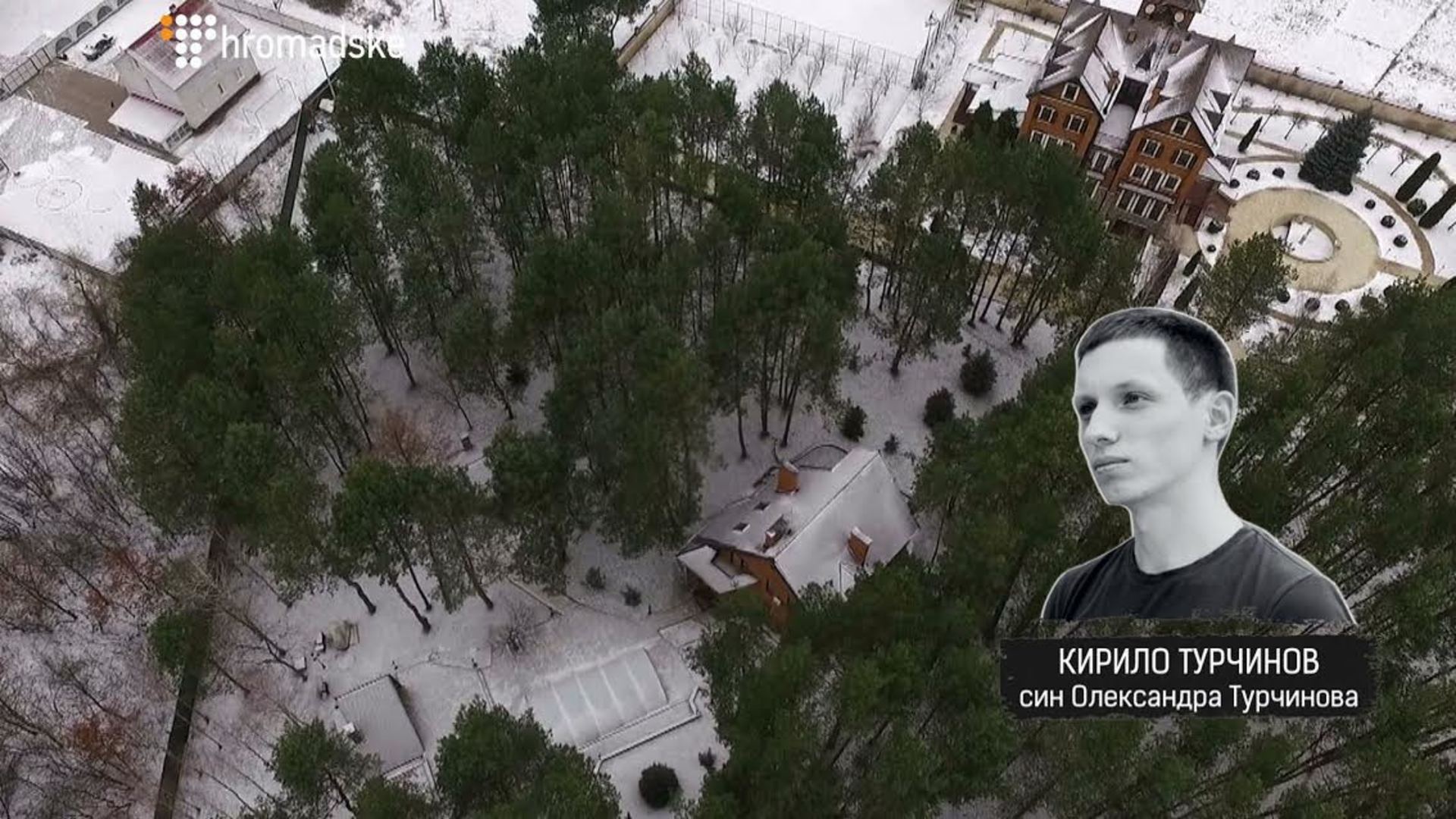 Turchynov explains the luxurious mansion of his mother-in-law …by her business skills:

“That’s a unique woman. She is very proud of the fact that she worked on the most potential missile plant YUZHMASH, elaborated the missiles there and that’s…you know, she often recalls that time. But when the Perestroika began…she has a tireless character, a lot of mothers-in-law have this type of character. She started working in the practical economy, she worked as a chief of the enterprise, and was engaged in the metals trading. So that you understand her character – she went to meetings on her own to solve problems with Chechens who were just getting to the market. …The registers are open. In other words you can check not only the officials. You can check chiefs. You can check their families, relatives etc»

Following the advice of the official we decided to check the firms of Tamara Belyba. However, we didn’t manage to find the enterprises established after the Perestroika he described. The oldest firm we found was established in 2002 with the participation of Turchynov’s father-in-law Volodymyr Belyba who’s 76 now. Turchynov had been a politician for 4 years by then.

Moreover, the following business successes miraculously coincide with his periods of success in politics.

Suchwise, after the first Revolution – the Orange one – the enterprise founded by Turchynov’s relatives purchased for the son’s-in-law party the whole office building – in Turivska street. This purchase was debunked by the present member of parliament Serhiy Leschenko who worked as an investigative journalist back then:

«Turchynov who at that time was a first Deputy of Batkivschyna party registered a large property in Kyiv on his relatives’ and relatives’ of his friends names, in particular it was the Batkivschyna party office on Turivska street. There were two addresses – Turivska, 15 and Turivska, 17. They were registered after a few little-known companies the final shareholder of which was Turchynov’s relative, a sister of his wife and also a wife of other member of parliament Ruslan Lukyanchuk. He was a treasurer of Batkivschyna party and was responsible for all financial procedures during Turchynov’s administration». 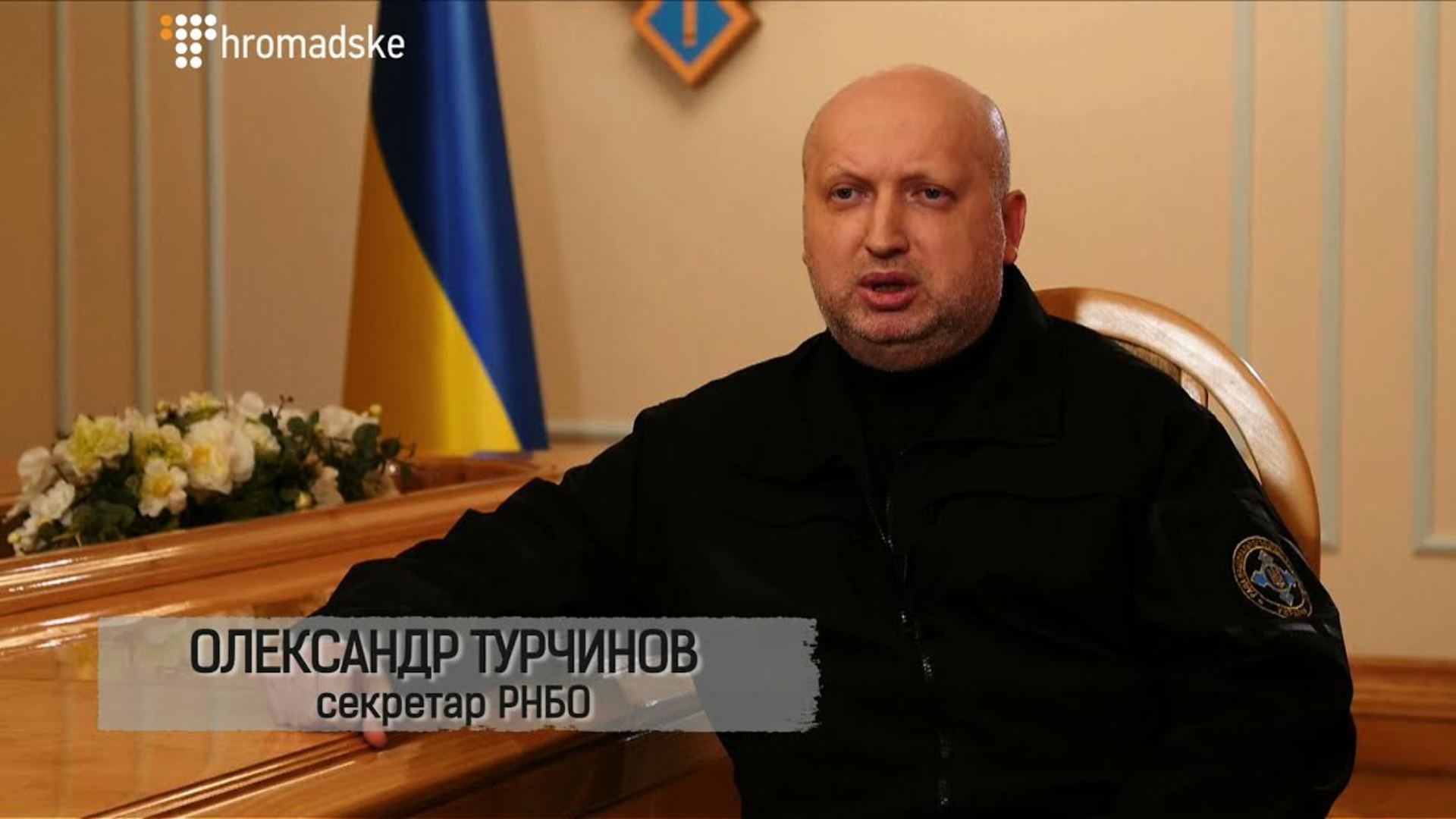 The late 3 years after the Revolution of Dignity have brought Turchynov’s relatives even more assets. In addition to the luxurious mansion in Bilhorodka, the firm of the mother-in-law Tamara Belyba became an owner of 6 thousand square meters of real estate in Korolev avenue in Kyiv. The locals point to this part of giant property complex. Currently the repairs haven’t been finished here. But after it’s done the building can be turned into the sizable office center and be let on lease. 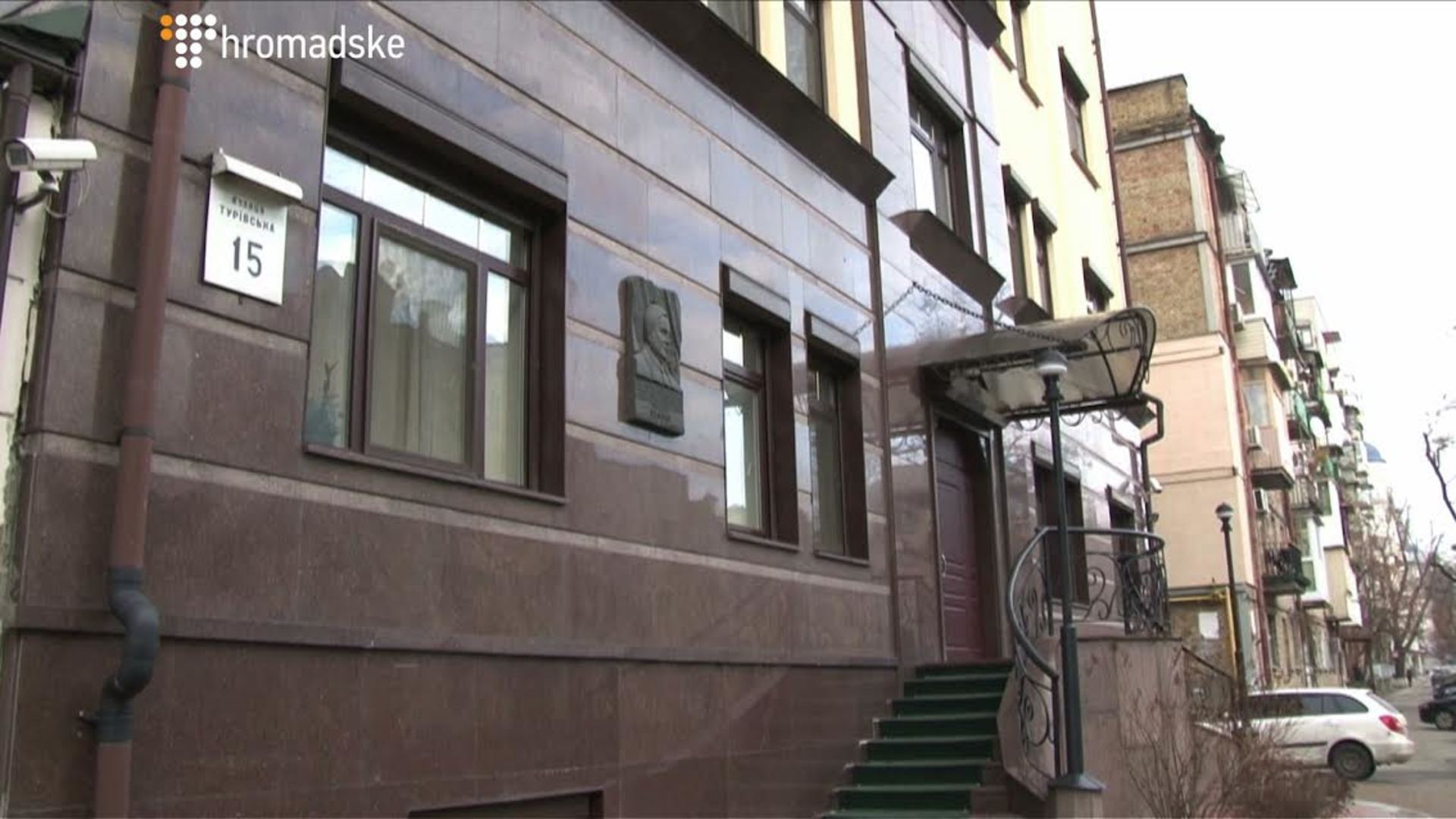 The other company of Tamara Belyba got to own 3 premises each with the area of more than 200 square meters here in this building in the center of the city – at 36B, Konovaltsya street. Oleksandr Turchynov’s father-in-law and businessman Ihor Tynnyi turned the other one into a restaurant, the biggest with an area of more than 600 square meters. Tynnyi affirms that the influential politician didn’t help him.

“I was looking for the place where I can make a restaurant, where I have been working and living for the last 40 years. So. The school where I went is just around the corner. I looked. And brokers looked for the place everywhere. Eventually they found the owners of the place, they owned it for 5 or 6 years. They offered to buy it but they didn’t agree on the price, then they offered a lease – they discussed something for a very long time. In the end they agreed to contribute the room and I will pay money. That’s how we started business together. Then I was told that I am Oleksandr Turchynov’s relative. As a matter of fact, I personally know Turchynov, frankly speaking I haven’t met him for 1.5 or 2 years, I’m saying that ahead of your question if we are communicating”, Ihor Tynnyi said. 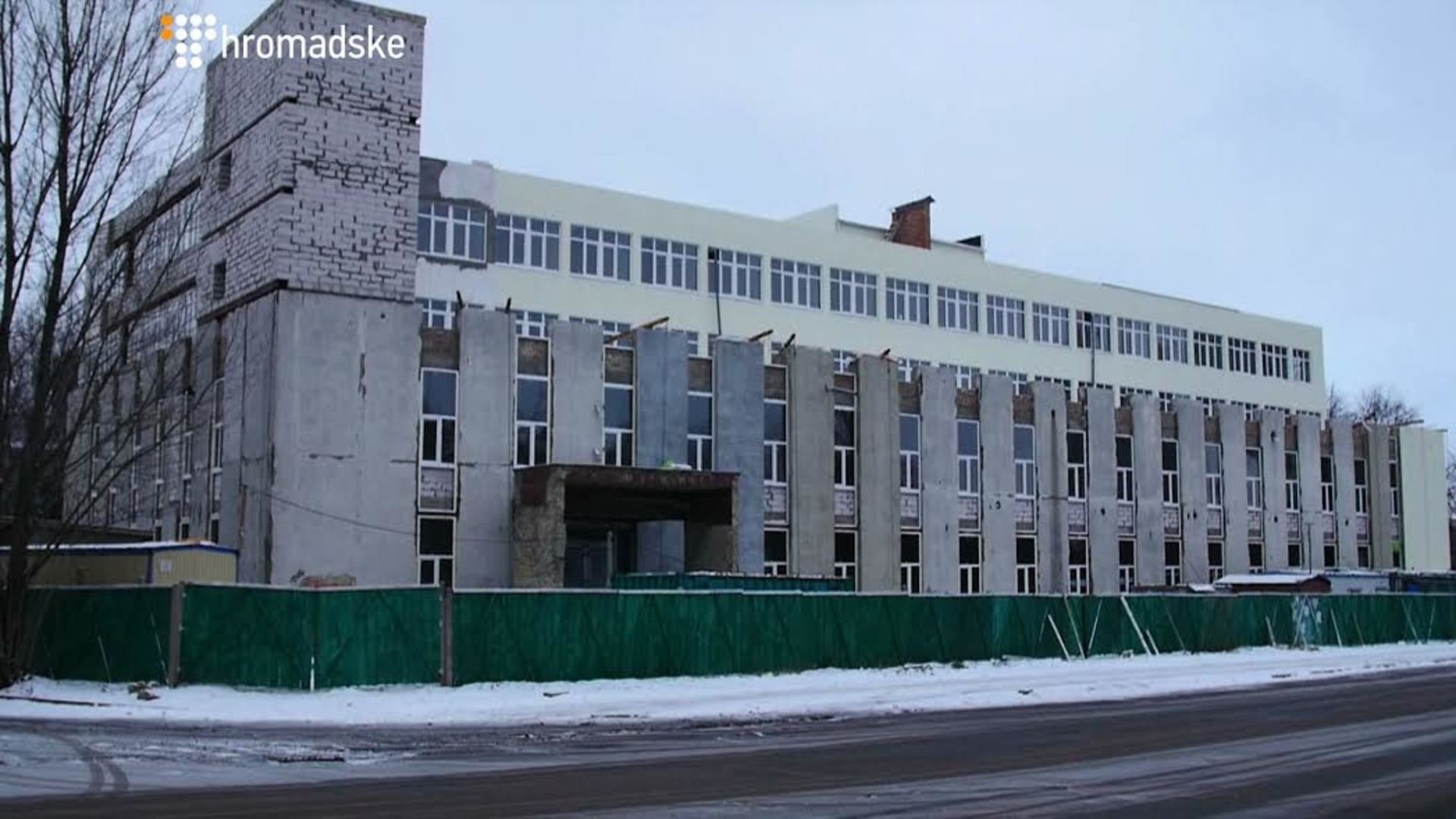 Kyiv region, Lisnyky village. That is the place where our colleagues’ camera crew was attacked in spring 2015. They came to shoot the mansion of Serhiy Chebotar who was a Deputy Minister of Internal Affairs then.

Here the notorious mansion of the militia official’s family. He has only 2 neighbors. On one side – ex-member of parliament Volodymyr Prodyvus. On the other – the sister of Oleksandr Turchynov’s wife Raiisa Vyshnevska. He owns this mansion and half a hectare of the land. The ecologist Olexiy Vasylyuk says that this land is very valuable and is planned to be build up, having cut down the pristine forests:

«They link all the plans to expand this construction either to Chebotar or Turchynov. I haven’t sat in the bushes, I haven’t spied. Frankly speaking. Basically I don’t care who should be prohibited to build up the forest area. Our task is not to let the forest be built up. I am 100 % sure they are not random people, it is too scandalous and not all people can do this. Planning to build something here means to be a part of a very big scandal» 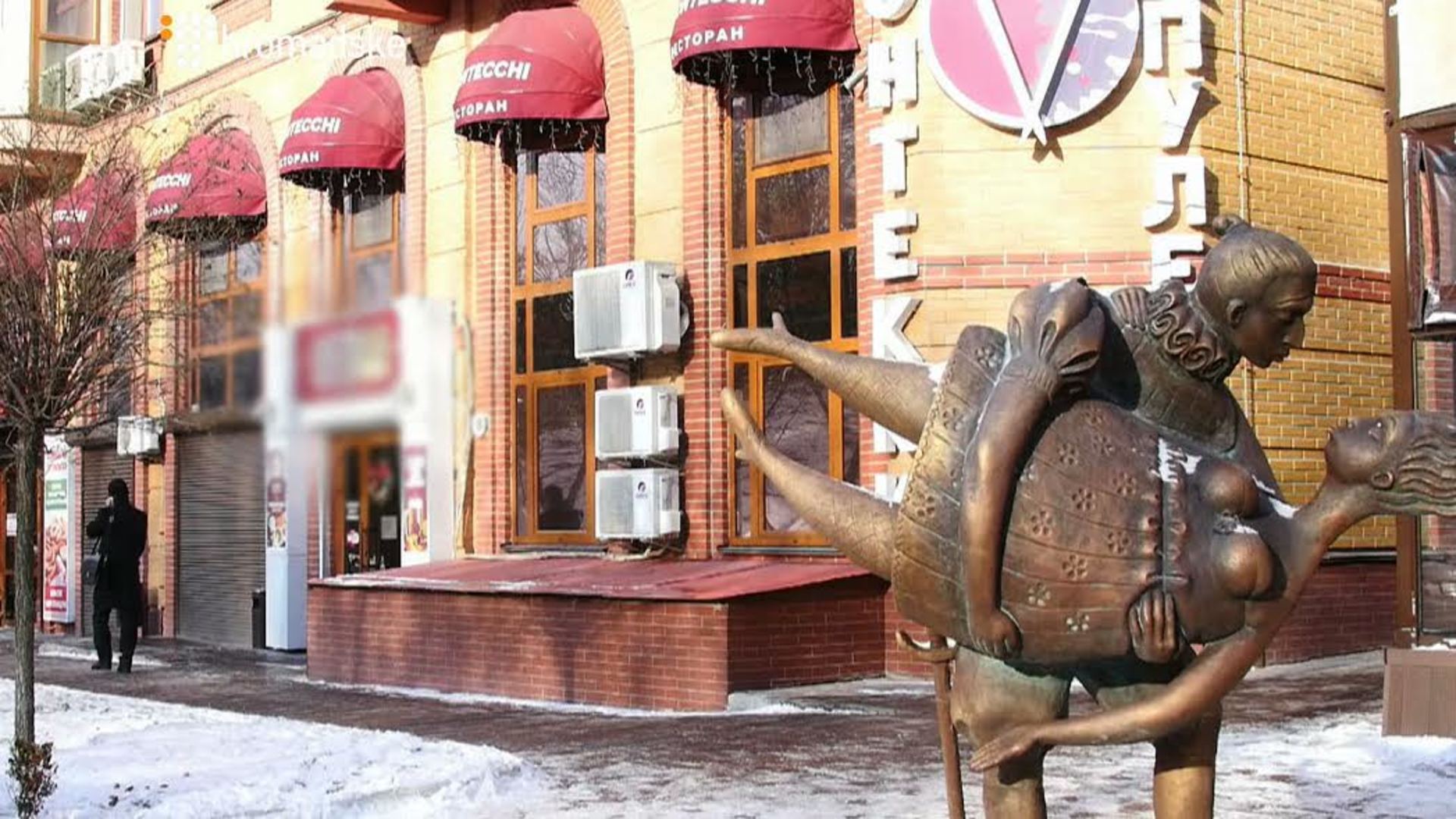 The Secretary of National Security and Defense Council has an explanation for this as well. Of course, he blames the criminal authorities:

«You know about the houses of Batkivschyna in Turivska street. They also belong to the enterprise managed by the sister of my wife Raiisa. She was under a huge pressure. I know you will now ask me about the plots which are now known. This question emerged because they wanted to seize the Batkivschyna’s facilities and the easiest way to do this was to open the criminal case against the owners of the enterprise. She was the owner of the one which these offices belonged to. They found out about Lisnyky, although that’s not a forest, because you are not allowed to privatize forest in our country, this territory is near the forest but within locality»

According to the official, the valuable forest is situated in dozen meters from his sister’s plot.

“I am not aware of the details of this question. I know that Raiisa has 3 or some plots which she…There is one which she really got by privatization in village council, but other ones were bought on secondary market. I want to say it once again – all of the audits and court proceedings were passed. You understand that there were no ceremonies or family oppositions…Anyway, it was proved that these are the outskirts, that the forest is not damaged and starts literally in 10 meters@, – Turchynov says.

Finally the Secretary adds that the critics of the government don’t notice positive things that we couldn’t even dream about during the Yanukovych’s presidency: «A lot of people criticize the government, there are lots of flaws, a lot of dirty spots but let’s speak fairly, plenty of things have been done, beginning with the e-declaration, for example. There are no analogues of it neither in Europe nor in the US”

We completely agree with Oleksandr Turchynov on that. However, now you have to check the declaration not only of the official but the property of his mothers- and fathers-in-law who frantically get firms, mansions and offices instead of rest they deserve in their age.