CAPTAIN UNDER THE RUSSIAN FLAG 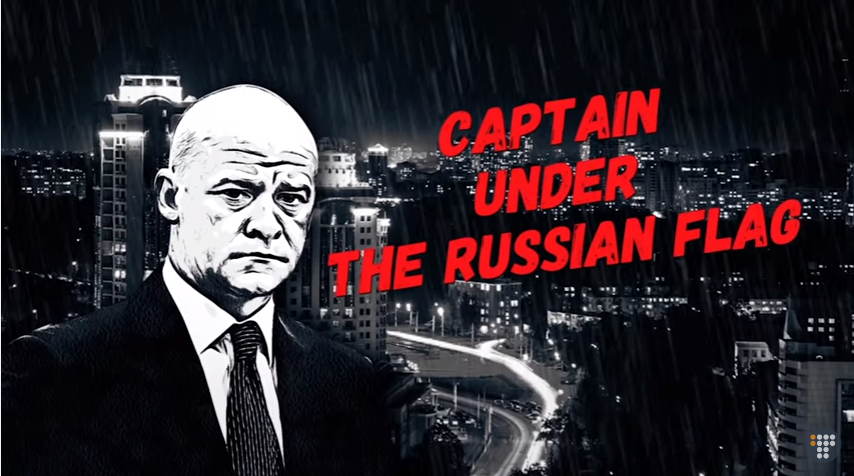 This investigation is based on documents from the company Mossack Fonseca (Panama, BVI) obtained by the German Süddeutsche Zeitung and shared with its colleages from the International Consortium of Investigative Journalists (ICIJ) and OCCRP, whose Ukrainian partner is Slidstvo.Info

This is the highest building in Odesa. The skyscrapers of the prestigious residential complex “Ark-Palace” obscure the sky. They were built by the business group ROST which many link to Odesa mayor Hennady Trukhanov. He denies everything. Three years ago we talked to Trukhanov about his involvement with this business. Back then, he was still a member of parliament.

– There is an Odesa development company called ROST. Do you have anything to do with it?

– Absolutely! Somebody likes to write that I own companies, ships, houses and other things.

– Maybe you used to work in this company, since people link it to you?

– Why don’t you sue the journalists who write these things.

One year later, Hennady Trukhanov became a mayor of Odesa. And the business picked up for ROST. Today the company wins most of the road repairing tenders in Odesa and many in Kyiv. And Trukhanov himself controls many members of Odesa city council, which allows him to push important decisions through it – including the decision about land.

But it hasn’t always been this way. Trukhanov began his path in the crime-filled decade of the 1990s.

– I have walked a very difficult road in life. A very difficult road. And I’ve done it on my own. I didn’t have any relatives, aunts or uncles who helped me… I made it into the military college. My biography is known. And when somebody wants to check out my house or a place where I lived with my family, my reaction is not very nice. Because I’m a man who knows how to protect his family.

Just like the Kyiv mayor Vitali Klitschko, Odesa mayor Hennady Trukhanov came to politics from the combat sports. In the early 1990s he was into Thai boxing.

How a young man experienced in combats can make good money? Back in those mafia-dominated times, the easiest way up in life was to enter a criminal group or become a security guard.

With his friends, Trukhanov opens a security agency Captain. The nickname “Captain” will stick to Trukhanov for a long time.

The “Captain” and his team were lucky to get Leonid Minin, one of the most influential bandits of Odesa, as a client.

Minin controlled the Odesa port and the arms traffic that went through it. By the way, he was the inspiration for the character of Nicolas Cage in the 2005 Hollywood movie “Lord of War.”

Some think that the movie was inspired by the life of Russian Viktor But, but it wasn’t. But never had anything to do with Ukraine and Odesa, while Minin and his group used to control almost the whole city.

Right here in the Odesa Port 20 years ago the criminal group of Leonid Minin was loading guns on the ships and sent them to all the hot spots of the world.

According to the dossier of the Italian police which we obtained, the Odessa group had several key members. Apart from Minin himself, there was his right hand Oleksandr Angert, known as “Angel,” Oleksandr Zhukov, who was in charge of the finances, and Hennady Trukhanov, who was the personal bodyguard of Minin and traveled the world with him using the Greek passport issued to the name of Gennidas Ozopulous.

– Did you know Mr. Leonid Minin?

– So you did? What kind of a relationship did you have?

– He was a well-known businessman. He worked in Odesa. Naturally, many people knew him. He is from Odesa, I’m from Odesa. And many people in Odesa are his relatives. It’s a social circle, sort of.

– The newspaper Guardian  wrote that you were his bodyguard.

– For some reason, everyone keeps calling me a bodyguard. Apparently they think that’s all I’m capable of.

We are heading to the home of Alla Korystovska. She is a retiree now, but in the 1980s and 1990s she used to work as an investigator in the Odesa police. She knows a lot about the activities of the criminal group of Leonid Minin.

Alla Korystovska – an investigator with the Odesa police in 1980s:

– The crimson jackets and golden chains with crosses on them are in the past, right? Today, they are all businessmen. Politicians. I started the research from the police. I was looking for information about Angert. I learned about his nickname, Angel. I’ve looked into his case. I didn’t read all of it, but I looked into it. He was convicted for the murder of a girl in Odesa. It was a burglary. There was an unpleasant episode in this case. While he was raping this girl, he bit off her earlobe together with an earring. And then he spat it out. The earlobe of this girl. I don’t know who the girl was, but he was accused of the rape. The rape and the burglary. – And the murder. – And the murder. He was sentenced to jail. I started looking into how he got out of prison. He bought his way out. There was no legal pretext to release him. Trukhanov was the head of the security in their group. If he came to Angel, and he knew well who Angel is, but he still went to work for them…

– What kind of relationship do you have with Mr. Angert?

– Everything is already written. Especially if you want to believe some dubious stories in the newspapers.

– So do you have a friendly relationship with him?

– I have friendly relationships with many people.

In 2000, Italian police arrested Leonid Minin. He’s got a long prison term. Oleksandr Angert settled in Israel, and Oleksandr Zhukov moved to London and his daughter later became the wife of the Russian billionaire Roman Abramovich. Hennady Trukhanov is the only one of the group who stayed in Odesa. And he quickly proved that he wasn’t going to stay in the rear.

– Recognize Trukhanov Hennady Leonidovych as the elected mayor of the city of Odesa, self-nominated.

But recently we became aware of some new facts about the mayor.

The name of Hennady Trukhanov is found in the documents and the letters of Mossack&Fonseca, a Panama company that registers offshore companies. The firms from the British Virgin Islands that have the Odesa mayor as their founder, control quite a few companies in Ukraine. Land lots, construction of commercial and residential property, state orders for roads repairing – those are the fields of interest of the current ruler of Odesa. However, in his tax declarations he has been leaving the “Business ownership” field blank for many years.

The company from the Virgin Islands is called Macon Assets Limited. Its co-owner Andriy Ivancho is an old friend of Hennady Trukhanov. In the 1990s they founded the Captain security firm together. Ivancho was employed as an assistant of Trukhanov when he was a member of parliament. And today Ivancho with Trukhanov’s daughter Kateryna manages the company called Skvo that developed this property and sells offices and apartments in it.

– Hello! Hromadske TV. Is the office of Skvo located here?

– No, they are in another building.

– Could you tell us where, exactly?

– Security will be right over. Are you looking for Skvo?

– I see. Do you have an appointment?

So the Limited Liability Company Skvo is registered in this building. The guards of this complex suddenly forgot the way to its office. The head of this company is Ivancho Andriy Andriyovych. He is a business partner of Hennady Trukhanov in several companies registered in the British Virgin Islands. Now we’ll try to reach this Skvo by phone.

– Can I see or hear Andriy Ivancho?

– I see. Is Kateryna Trukhanova there?

– Excuse me, what’s your name?

– What are you calling in reference to?

– Unfortunately, no one’s here. Sorry, I have another line.

Besides Macon Assets Limited, which is one of the factual owners of Ark-Palace, the names of Hennady Trukhanov and his friends are found in other firms registered in the British Virgin Islands. For example, a part of Corderoy Trading Limited is co-owned by Trukhanov, Ivancho, and Yuriy Shumakher.

He is a member of the Odesa city council, elected on the list of Trukhaniv’s party Trust The Deeds (Doviriay Dilam). Before being elected, Shumakher was the director of the above-mentioned business group ROST. Since Trukhanov and Shumakher joined the city authorities, ROST has been getting most of the state orders to repair the roads in Odesa.

Arkadiy Topov – an activist of the initiative Anti-corruption Office:

– In recent years the spending on road repairs in Odesa grew fivefold. In 2013 it was Hr 66 million. The plan for this year is to spend Hr 374 million. There were ten tenders worth of over Hr 20 million. Eight out of 10 tenders were won by the companies from the ROST group.

What the mayor of Odesa has been denying for many years is now confirmed by the many documents obtained by Slidstvo.info and our colleagues in the world’s major media outlets.

Through the offshore companies registered in the British Virgin Islands, Hennady Trukhanov controls various parts of the Rost business group. Besides repairing roads and developing elite property, this group builds apartments for the middle class.

This new residential complex in Prokhorivska Street is also a part of the business empire of the mayor of Odesa Hennady Trukhanov. But he owns it through a different offshore company, Hemes Group Limited.

Insurance business, construction of the country houses, legal services – we counted over 20 companies that are linked to the mayor of Odesa and his closest associates. Through the offshores in the British Virgin Islands. But the most interesting thing is, in all of these documents Hennady Trukhanov isn’t listed as a citizen of Ukraine. He has a different citizenship – Russian.

Two years ago, a member of parliament Volodymyr Ariev posted on Facebook the copies of the documents from the Migration Service of Russia. They stated that the mayor of Odesa has two Russian passports – one has the registration address in Dagestan, another in Sergiyev Posad.

Trukhanov recently renewed the second passport as he turned 45. Back then, the Odesa mayor denied having the Russian citizenship. But now, having the copies of the registration documents for his offshore companies in the British Virgin Islands, we asked him for a comment again.

The mayor of Odesa didn’t want to give us an interview. He gave us this answer by phone, through his spokesman. But let’s see, perhaps he will change his mind when we visit him in person and tell us about his involvement with the offshore companies in the British Virgin Isles.

– Hello. Hromadske TV. Is the city mayor in the office?

We can guess that when the Odesa mayor is back from his vacation, he will again deny everything, like he did before.

So Hennady Trukhanov has a chance to become yet another Ukrainian official who decidedly and persistently denies the facts discovered in the journalistic investigations. And later he may look for an asylum in Russia, like other former officials. Judging from the documents we obtained, in Russia he will be taken in as one of their own.