Головна Сторінка » English stories » “These scoundrels should be caught and strangled”: how metropolitan Troieshchyna catches saboteurs and defenses its district

"These scoundrels should be caught and strangled": how metropolitan Troieshchyna catches saboteurs and defenses its district 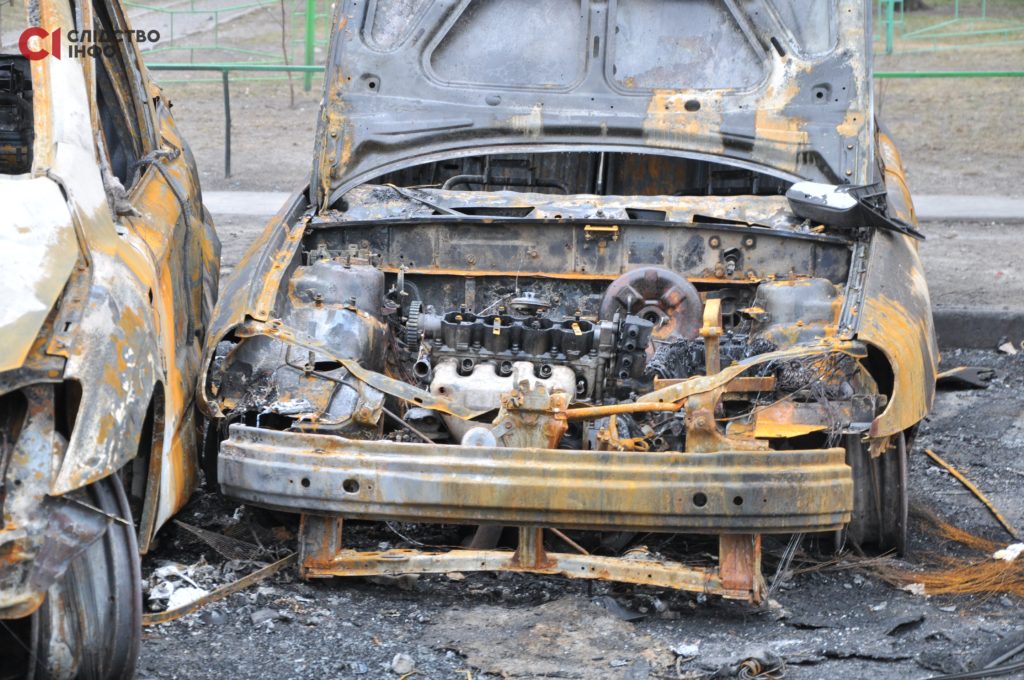 The war with Russian invaders has already been going on in Ukraine for 11 days. On its fourth day, the occupiers fired at one of the capital’s districts, Troieshchyna, on the northern outskirts of Kyiv. A shell hit the yard between the houses, killing a man. The Russians have also repeatedly tried to attack TPP-6, a strategic facility on the outskirts of Troieshchyna, a thermal power plant that supplies heating and hot water to the northern parts of the capital.

These are exactly the northern and north-western parts of the capital that are currently in the greatest tension, as heavy battles are being fought on north of Kyiv for Hostomel, Bucha, Irpin, Borodyanka and Makariv. And at the very beginning of the war in the capital Troieshchyna and Obolon, the territorial defense and the military neutralized many saboteurs.

Journalists of Slidstvo.Info visited Troieshchyna to take a look at how the district, which may be one of the first to come under attack by Russian troops, was fortified during the war.

The outskirts of Troieshchyna are empty. Queues can be seen only near grocery stores. We come across melting pots of people near local garages. It turns out that these people are the part of the Territorial Defense Forces of Ukraine troops.

The work is in full swing here – documents are being checked, people are getting ready for their evening shifts and some of them are patrolling the district. It seems that all the locals have stood up to defend their array. Mykhaylo Mykhaylovych, an older man, also joined the Territorial Defense Forces of Ukraine. He says he took the whole family away and staying alone went to defend Troieshchyna. Prior to that, he used to work at the Arsenal factory.

His lifestyle has changed so far – since the beginning of the war he has been repairing cars and defending the district. The only thing he is worried about is Irpin, where the part of his family appears to be left, so he asks about the situation in the town, which is in heavy battles with the invaders.

Mykhaylo Mykhaylovych actively participates in the work of terrorist defense. He says they mostly catch saboteurs.

“We often catch someone – they have been sitting here for a long time. Half a year, a year. This means that the operation is planned and quite well prepared,” says the man.

They take turns on duty – some during the day, some younger and stronger and skilled in shooting – at night. Many locals went to the Territorial Defense Forces of Ukraine, in particular, the so-called “gopniks” (bullies).

“In the evenings, the guys chase them (saboteurs – ed.),” says the man. “They back them here, and we catch. Looks like a usual hunt. These bastards should be caught and strangled. Even if we catch one for a week, it is great. We catch these bastard, we catch,” he adds.

The greatest attention is now paid to looters – they say there are quite a lot of them lately. But still there are much less saboteurs now.

Finally, we ask Mykhaylo Mykhaylovych to take a picture of him. At first he refuses, and then says that only if with his brothers.

At the farewell, the defenders are treated to a cake.

After that we go to the place where the rocket hit the yard of residential buildings. Traces from the street seem to be imperceptible, but then a local defender takes us to the yard. He doesn’t want to be photographed, but he agrees to guide us and let us use the recorder. He lives in one of the houses, the yard of which was hit by a Russian missile.

“My windows face this way (towards the yard – ed.), all the window panes are broken there too. First, ours hit twice (we have already learned how to distinguish between ours and not). Then at around 9 or 10 o’clock there was some whistle and hitting the yard, that’s it,” he says, leading us out through the dark entrance to the other side. 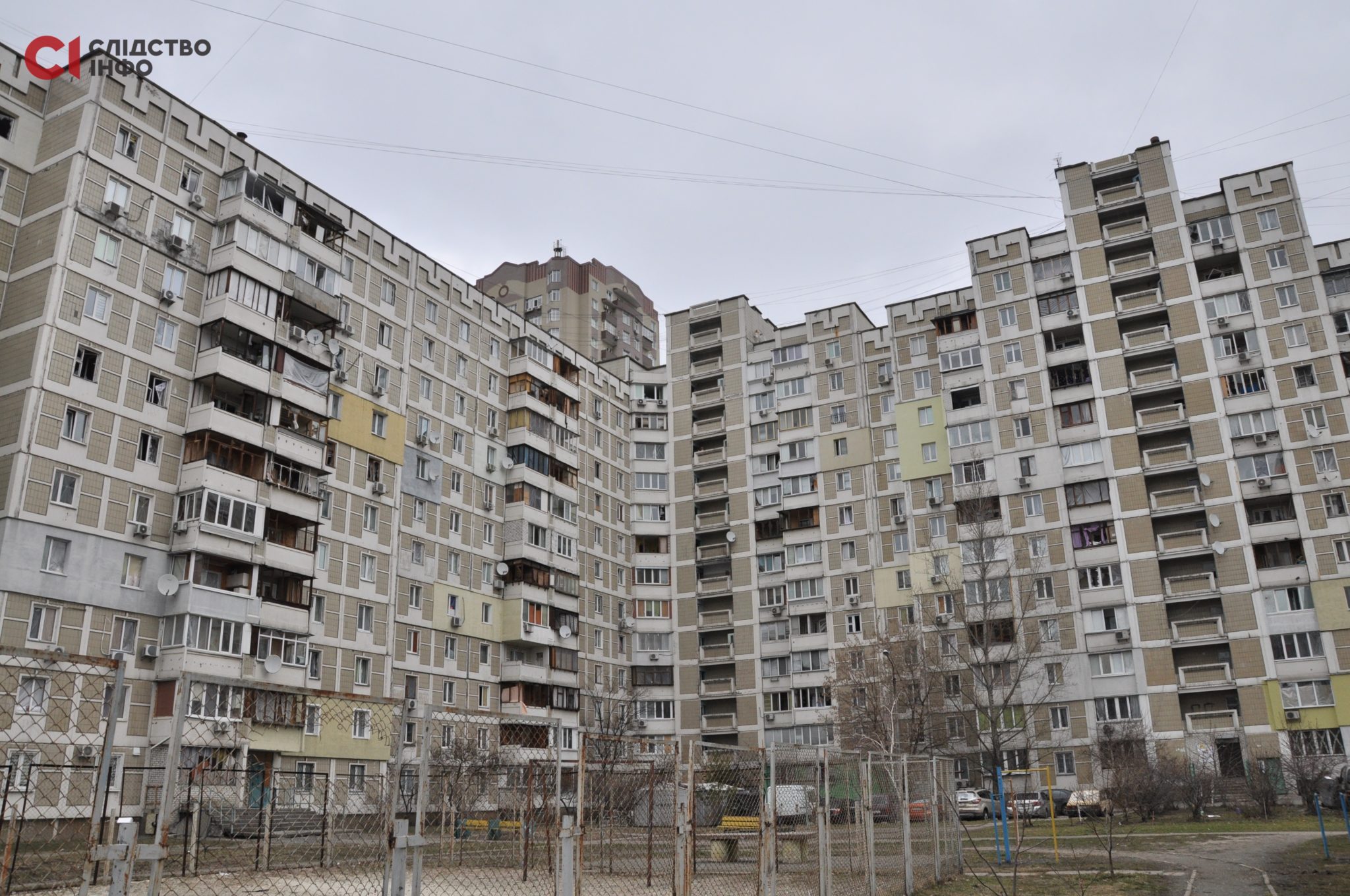 Traces of a missile hit are visible in the yard. The pit itself is already covered with sand, and in the surrounding buildings – even distant ones – window panes are all broken. A playground is a few steps from the pit.

The remnants of the shell were taken to the fenced parking lot nearby. Some of them have probably already been stretched as souvenirs, because our guide says that there were more fragments before. 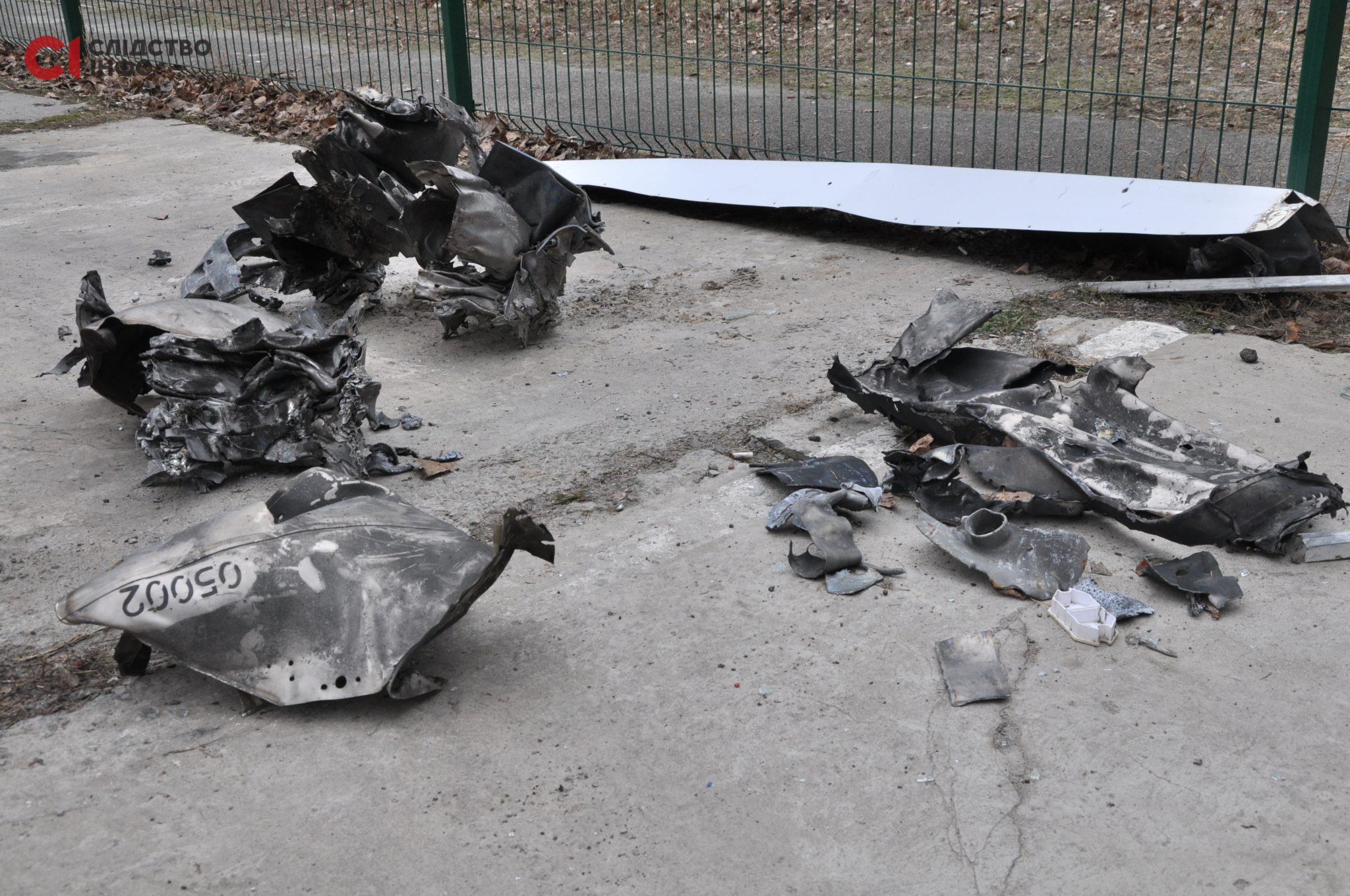 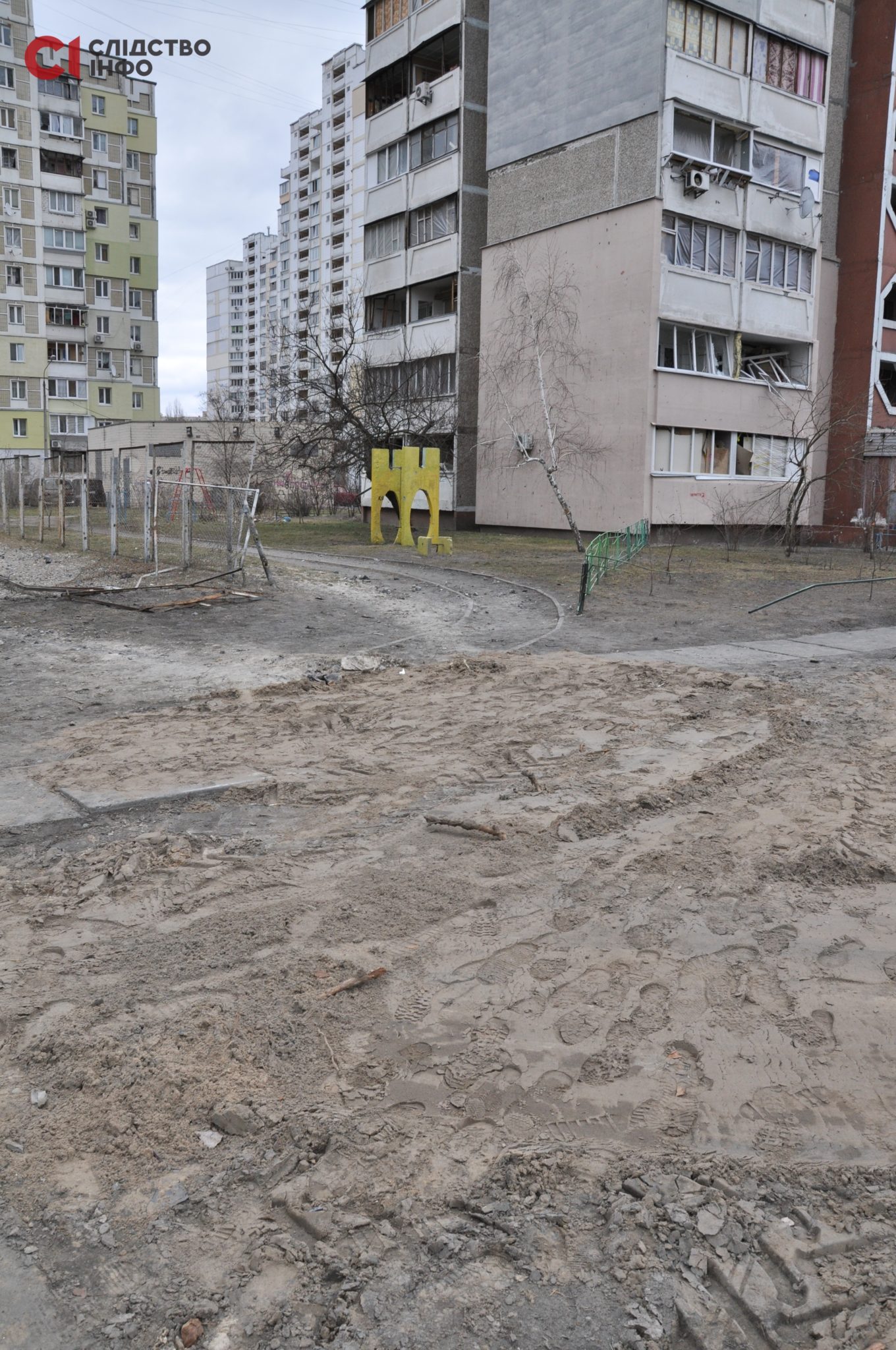 The shell set fire to cars near the impact point. Their burnt remains are still there. There is a blood-like spot on the asphalt near the next house.

“There was a man on the third floor on the balcony, smoking. An explosive wave threw him off the balcony, tore off his leg. He died at the hospital,” said a local guide. 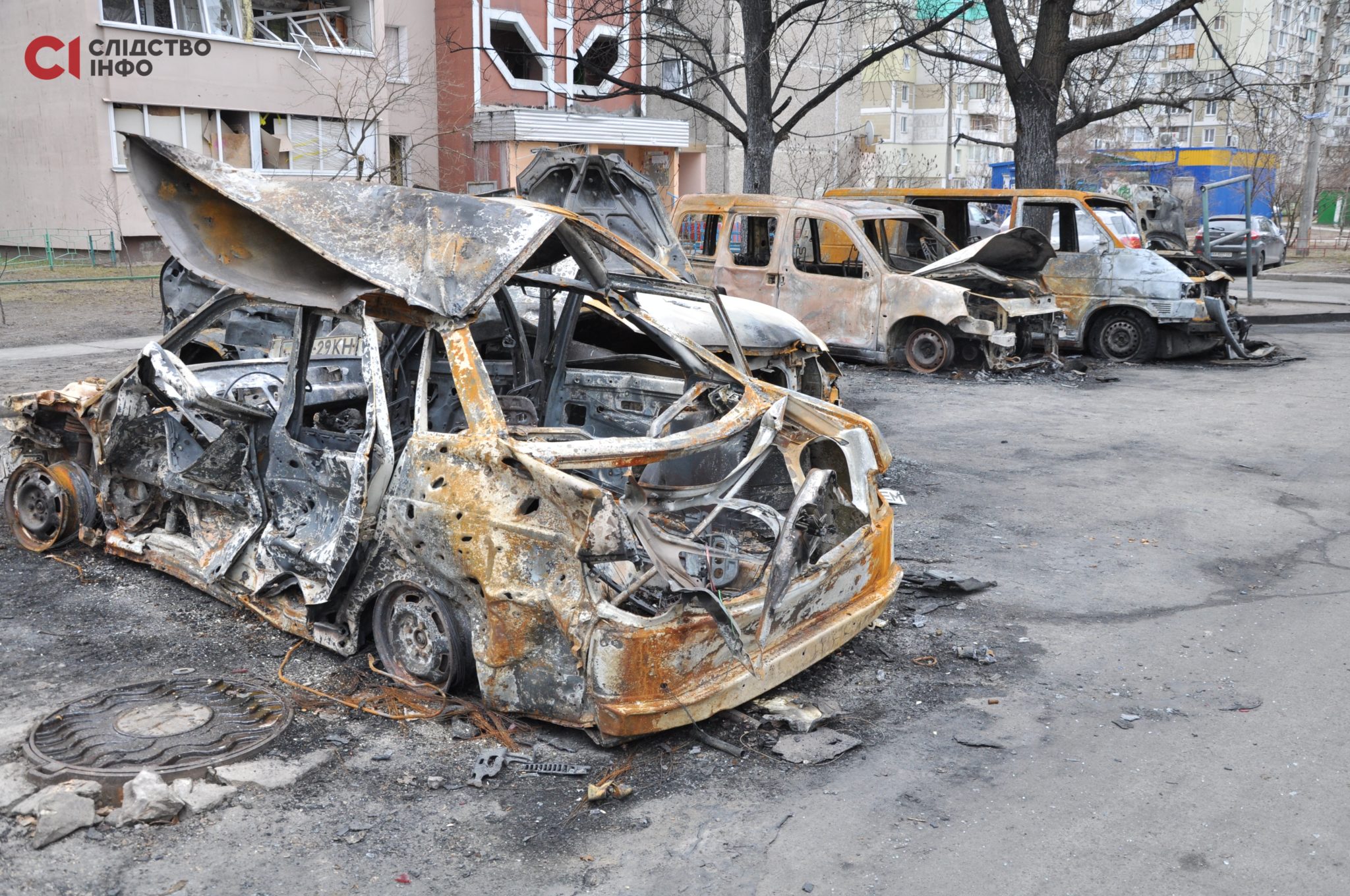 Remnants of the shell lie in the parking lot. They are even marked with serial numbers. Locals come and ask if there is a permit to film. Then they say that they help with humanitarian aid and have organized a field kitchen in Troieshchyna, where they prepare about 5,000 servings a day.

It is said that the dead man’s wife came to them the next day. She brought some volunteer help.

“She says, “If you guys need something, I’ll help you”. She asked what is needed. We said we needed some kids stuff, diapers, and so on. The most important thing that worries me is the food warehouse, grain products, potatoes, carrots, onions, porridge, cereals, medicines and baby food alongside with hygiene,” said Dmytro, one of the volunteers. Inscription in the volunteer headquarters of Troieshchyna

We approach the guard of the local parking lot. His house is located a few meters from the pit from the shell.

Yaroslav Mykolayovych is 67 years old, he says he was born in an embroidered shirt – despite the fact that the guard’s booth was completely smashed, he himself had only a few scratches.

“I had a breakfast, was thinking about going to the sink, but went inside. I bent down to take a bottle of water, but the feeling was like someone gave me a kick. I went headfirst, and the door, how to say, saved me a bit. I was standing behind the door, the door was a little ajar. I think if I had gone there, I mean I was literally standing there (points to the place next to the explosion – ed.), I would not be with you right now,” he said. 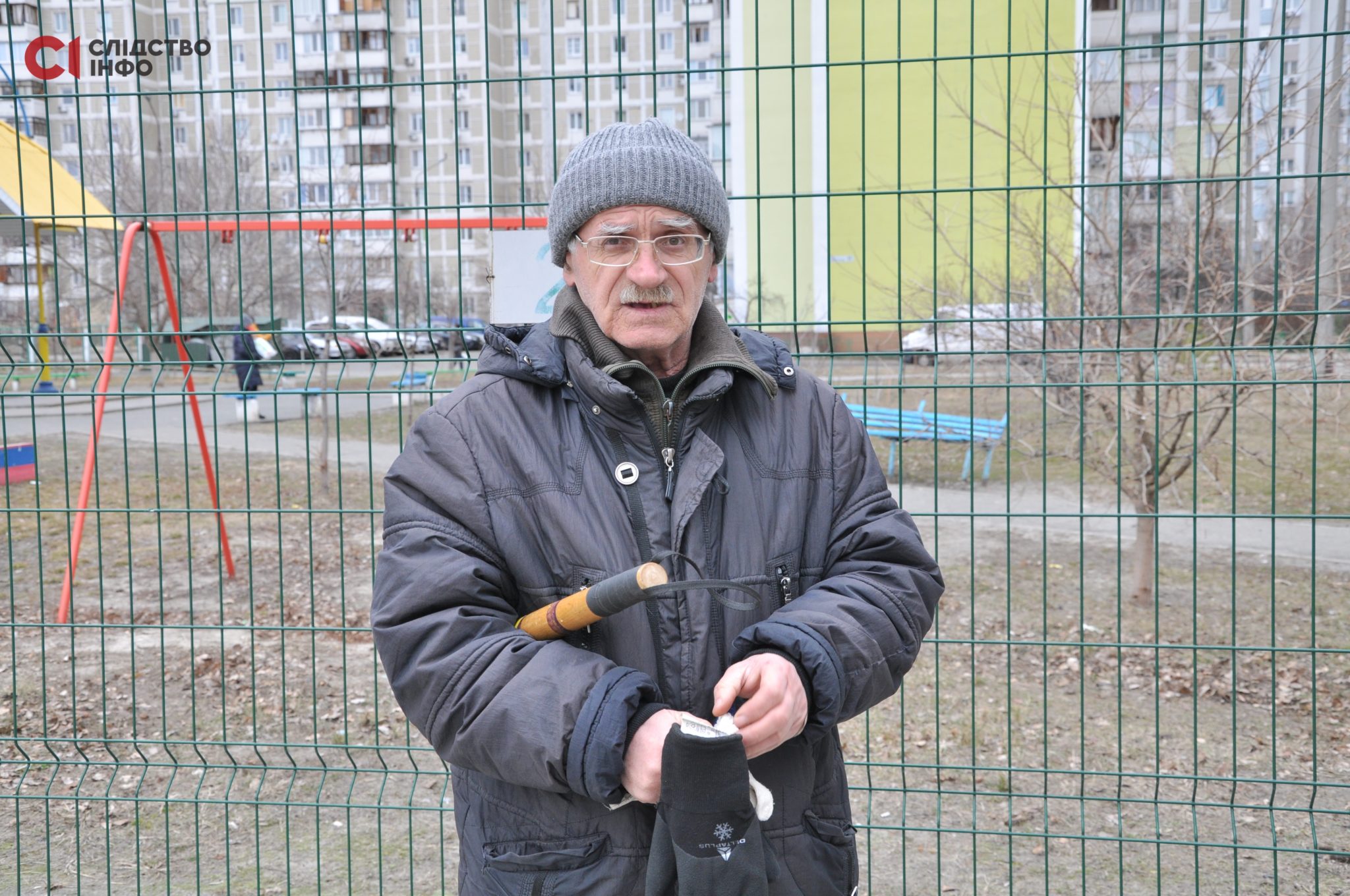 We ask if many residents left the district.

“But where to run to, this is our land… They (people – ed.) taped up the windows with cloth or film… and continue living,” says the guard. 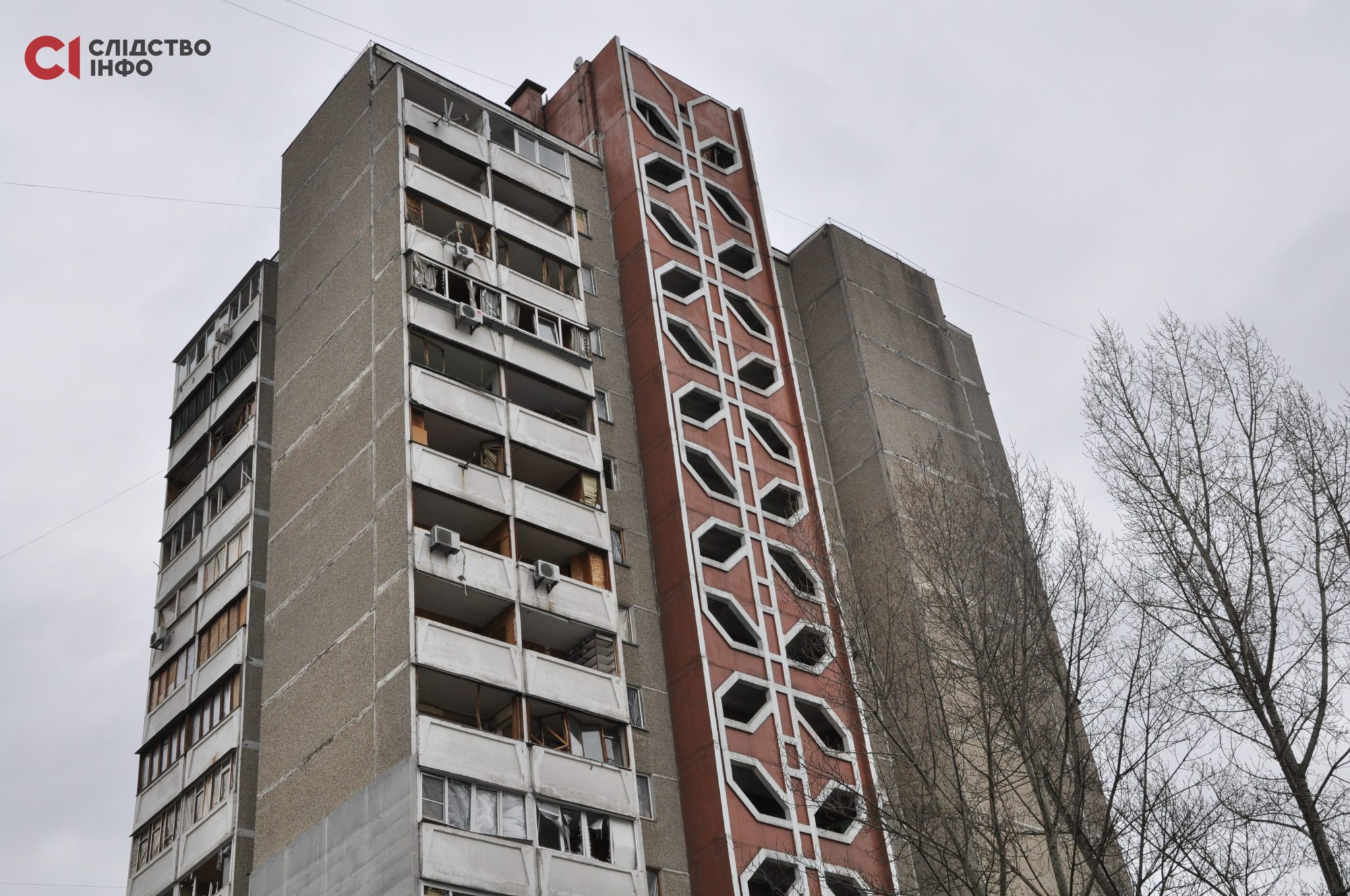 The men, who are involved in humanitarian aid centres activities, tell how the Troieshchyna self-organized during the war.

“There are people in the houses responsible for checking the labels, we check everything… Someone works in the field kitchen and prepares food, someone takes up arms, someone works as a loader because there are not enough people and the products need to be unloaded. People are self-organizing: some people prepare cocktails, some people patrol at night, everyone is busy,” they say.

Each house has its own local chat, where residents are coordinated and organized. I ask if there are cases when some strangers provoke panic there.

Yaroslav Mykolayovych responds: “There are, but we notice them quickly. We know all our people, we don’t let strangers in, so we keep calm,” he says. Light masking is also neglected here – the lamps are left on so that looters do not come there. 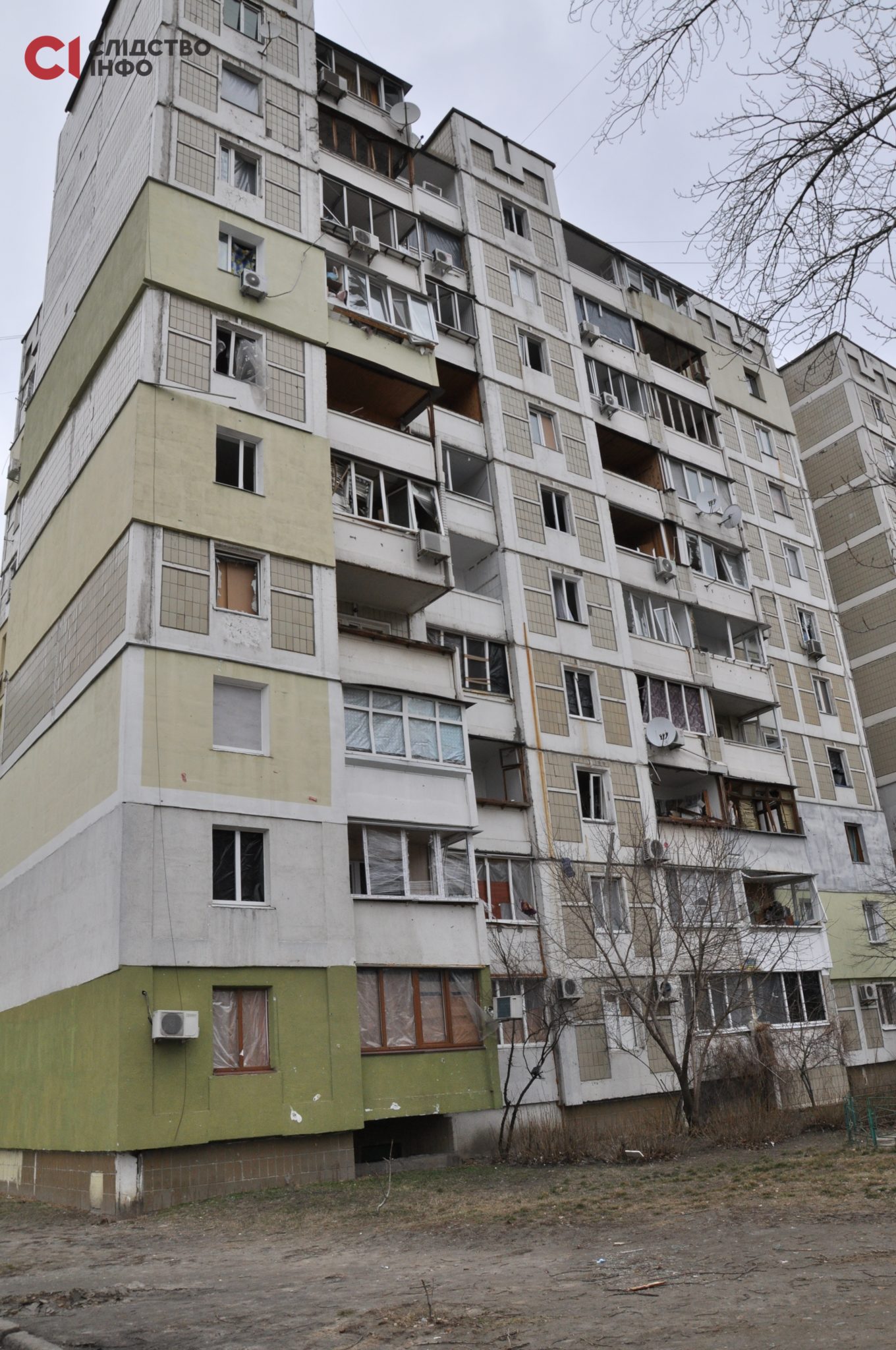 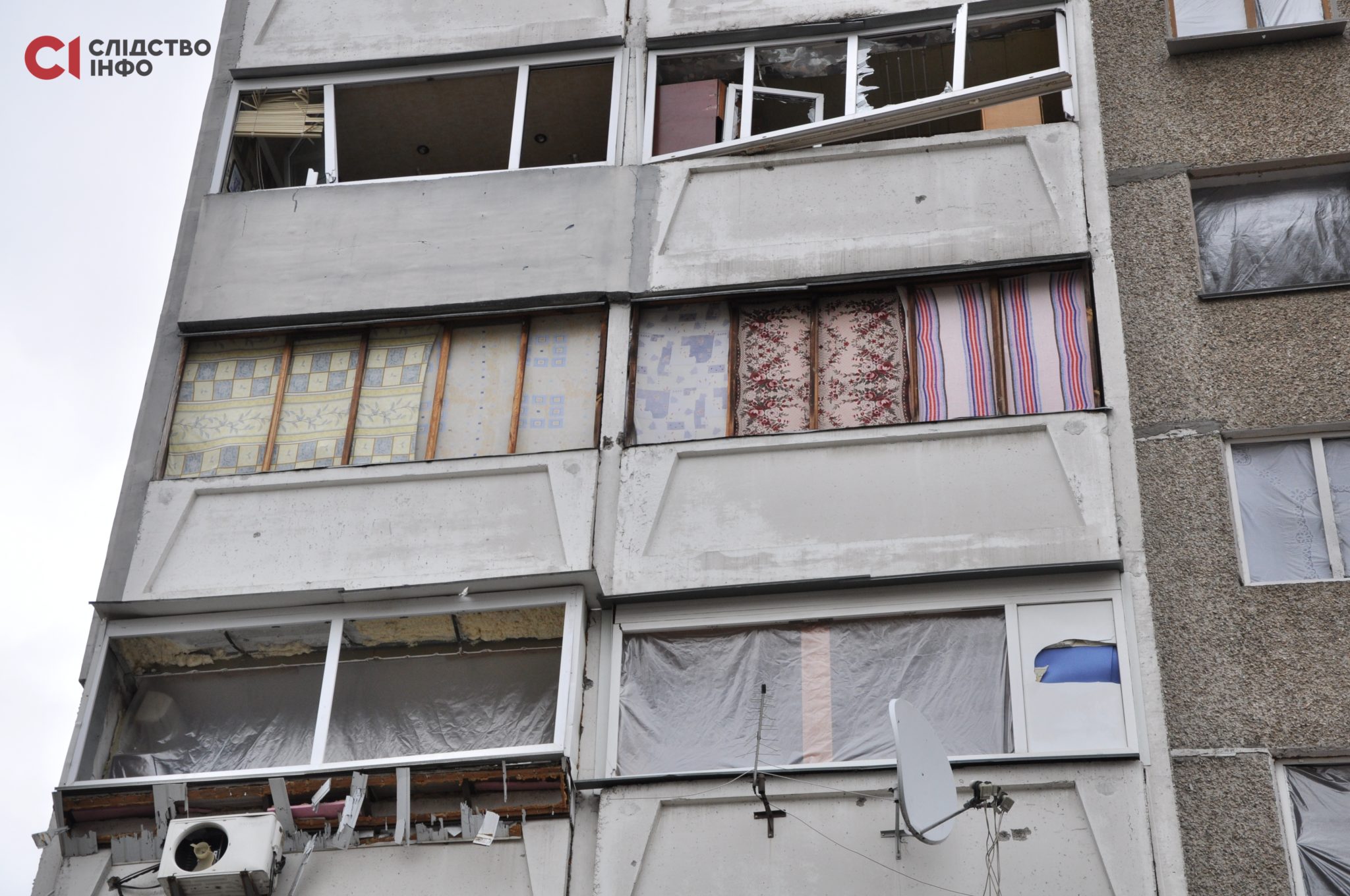 “Because of one jerk the whole world gets in tears and deaths… There is no fear, there is nothing to fear, you only need a gun in your hands. If there is no weapon, we will dig everything up. Weapons are to be put in people’s hands so that everyone knows that they will be shot from every bush, from any window,” he said.