Головна Сторінка » English stories » Nuclear threat: how Russians have occupied Zaporizhzhia Nuclear Power Plant and what the consequences may be

Nuclear threat: how Russians have occupied Zaporizhzhia Nuclear Power Plant and what the consequences may be 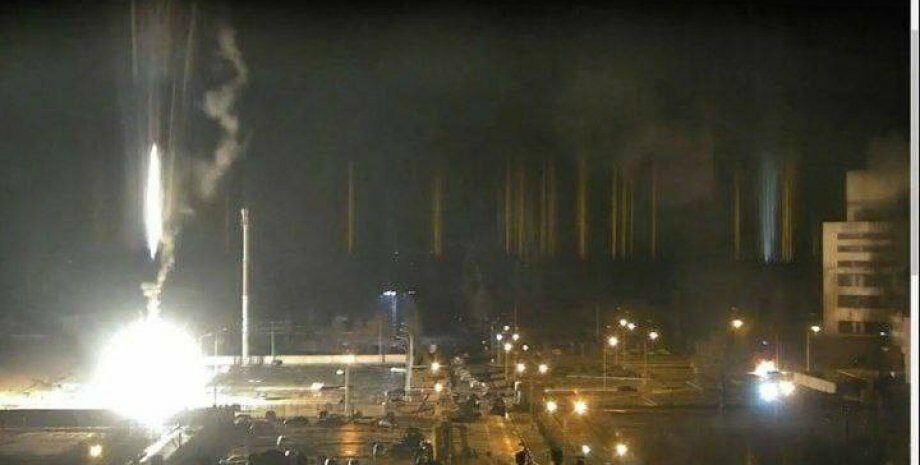 On the night of March 4, Russian troops captured the Zaporizhzhia NPP. Prior to that, it was attacked by artillery shelling – the building of the reactor compartment of the power unit and the site of spent nuclear fuel were damaged. The world was calling it the “second Chernobyl”, and Ukrainian President Volodymyr Zelensky stated that the actions of the Russians should be determined as “nuclear terrorism.” The occupiers are still there. Slidstvo.Info asked Ilona Zayets, an expert in nuclear energy, to describe how the attack took place and what the consequences might be.

HOW THE “KADYROVITES” GOT TO THE STATION

For several days, Russian troops wandered the outskirts of Energodar, the city of power engineers, where the Zaporizhzhia NPP is located. Big groups of residents of Energodar had come to the checkpoint twice. After that Russian military turned around and went to look for the backup, until the evening of March 3 they entered the city in a column of about 100 vehicles of military equipment. Later, during the telethon, the Minister of Energy of Ukraine German Galushchenko told that the capture of Zaporizhzhia NPP is impossible. Being asked what the situation would be if the occupiers managed to attack the nuclear power plant in Energodar, Galushchenko said that it wouldn’t happen because the nuclear power plant was very tight and adequately protected. At the same time, residents of Energodar reported that there were no additional troops of the Armed Forces of Ukraine in the city, only reinforced battalions of the National Guard before the start of hostilities.

It is the National Guards that have been fighting since the night of March 4 on the territory of the NPP. This could be seen live, as the station staff broadcast live from the station’s webcams on YouTube.

The broadcast made it visible, and it was also reported by the Mayor of Energodar, Dmytro Orlov, via the Telegram channel, that the fire started from the shots of the Russian troops. The fire lasted until 6 AM as the occupiers fired at utilities and firefighters. Fortunately, the fire engulfed only the training center, where there are no radioactive materials, but only the equipment and facilities on which nuclear scientists learn to operate reactors. The administrative building that the NPP management occupies was also on fire.

At 6:20 AM the fire was extinguished, but the Zaporizhzhya NPP was already under the control of the occupiers. The same happened to the part of the city. And to its mayor. He left the last message in his Telegram channel, which completely contradicted his previous rhetoric. Among other things, he said that there were no victims among the civilian population, and the Russian occupiers shot at the NPP with blanks. He kept his eyes down almost all the time.

Regarding the radiation situation, the operator of the Zaporizhzhya NPP – NNEGC “Energoatom” and the State Nuclear Regulatory Inspectorate of Ukraine assure that the current radiation and fire situation at the nuclear power plant is “within normal limits”. But if the fire had spread to the blocks at night under constant fire and the Russian occupiers’ had banned on extinguishing it, it would have been difficult to assess nuclear risks. That is what the acting General Director of the Zaporizhzhya NPP, Igor Murashov, was warning about at night.

Consequences of the attack of Russian invaders on the administrative building of the Zaporizhzhya NPP. Photos: NNEGC “Energoatom”

Therefore, the President of Ukraine Volodymyr Zelensky called the shelling happened at Zaporizhzhya NPP on the night of March 4, the “nuclear terrorism”.

Currently, there are some reports from the Zaporizhzhya NPP press center that representatives of Kadyrov’s detachments [Chechen President, Ramzan Kadyrov’s, troops] are at the nuclear power plant. At the same time, no other authorities have confirmed this information.

“WHERE ARE YOU, THE WORLD’S NUCLEARISTS?”

The whole world immediately reacted to the events at the power plant. But in different ways.

NATO Secretary General, Jens Stoltenberg, began his meeting with US Secretary of State, John Blinken, on this topic. The President of Ukraine discussed the events at the Zaporizhzhya NPP with the leaders of several countries. Europe and the United States are united in their assessment of the events, calling them a “Russian war crime” and a “new level of terror.”

The only one body that has not officially acknowledged Russia’s aggression and has not made clear demands to Russia, that does not even talk about the possibility of sanctions and does not call Russia an aggressor or occupier – is the IAEA, the main UN body responsible for nuclear security and compliance of numerous non-proliferation and nuclear safety conventions.

Since the beginning of the war in Ukraine and the attack of the Chernobyl NPP by Russian troops, the IAEA has already issued 11 statements calling on the armed forces of both countries to resist the shelling near nuclear power plants.

Who and what is able to prevent the possible tragic development of the situation – both at the currently captured Zaporizhzhya and Chernobyl NPPs, and other possible provocations at nuclear facilities? First of all, it is the above-mentioned IAEA, to which Ukraine has been appealing for help since the first days. To date, in 11 official statements, IAEA Director General, Rafael Grossi, has nothing but concern. In his appeals, he does not share the actions of the Russian occupation army against the defense of Ukraine. Moreover, even Ukraine’s call to release the Russians from the positions they hold in the various nuclear security bodies set up by the IAEA has been ignored.

However, Grossi later offered to visit the Chornobyl zone and meet with representatives of the Russian and Ukrainian sides. But not immediately, only after the end of his mission in Iran.

Instead, Mykola Steinberg, the former Deputy Chief Engineer of the Chernobyl NPP and a world-renowned nuclear expert, made a statement addressing the world’s nuclear engineers, including Russian nuclear scientists, whom he called vile cowards, and Ukrainians. “I, Mykola Steinberg, the Chief Engineer of the Chernobyl NPP from May 1986 to March 1987 (the time when the Chernobyl accident took place and liquidation actions took place), know what a nuclear catastrophe is not from textbooks, newspaper articles or statements. Politicians… I know what forces and how much life is worth fighting the peaceful atom that got out of control “, – he said, asking: “And where are you, the world’s nuclearists? Did they hide their heads under their wings like ostriches? You know better than anyone that a nuclear tragedy is not local! The time for political correctness has passed… Crush the hour (Putin) before it’s too late!”

Moreover, there are enough operating nuclear power plants and other radiation-hazardous facilities controlled by the IAEA in Ukraine. They exist not only in Zaporizhia and Mykolaiv regions, but also in Kharkiv and Kyiv, to which Russian missiles are sent every day. So when Ukraine asks it to close its sky today, it cares not only about itself but also about Europe.