Головна Сторінка » English stories » Nikopol under shelling: how the city near Zaporizhzhia NPP lives, where sirens do not stop 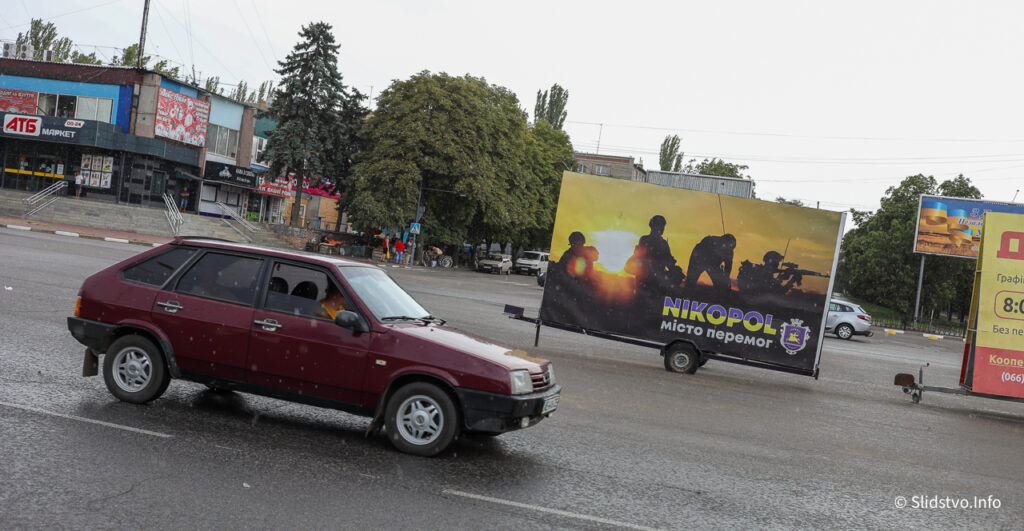 Intensive shelling of Nikopol, Marganets and nearby settlements began in mid-July – since then, several dozen ‘arrivals’ have been recorded here every day. Approximately half of the residents have left, and those who stay continue to go to work and hastily repair what was destroyed by the Russians.

“EVERYONE IS AFRAID OF RADIATION, EVERYONE UNDERSTANDS EVERYTHING”

On the way to Nikopol, more cars are driving towards us than towards the city. In the city with once 116 thousand people, and two large factories, less than half of the inhabitants are now left. People are leaving mainly because of the constant shelling – every night Russian artillery and ‘Hrad’ (a self-propelled multiple rocket launcher designed in the Soviet Union) rockets strike the city and nearby settlements.

Journalists are not allowed into the city without the accompaniment of officials, so while we are waiting for the permission, we locate in the village of Musiivka, near Nikopol.

From the beaches of Musiivka, which overlook the Kakhovka reservoir, the nuclear power plant is clearly visible. On the river bank we meet a local resident Oleksandr. We ask him about life near the station captured by Russians. The man says that the enemies are not hiding, because they probably understood that the Ukrainian military will not shoot at the nuclear power plant.

“They are leading a mean war. They have hid – we cannot hit them,” he adds, “Everyone is afraid of radiation, everyone understands everything”. 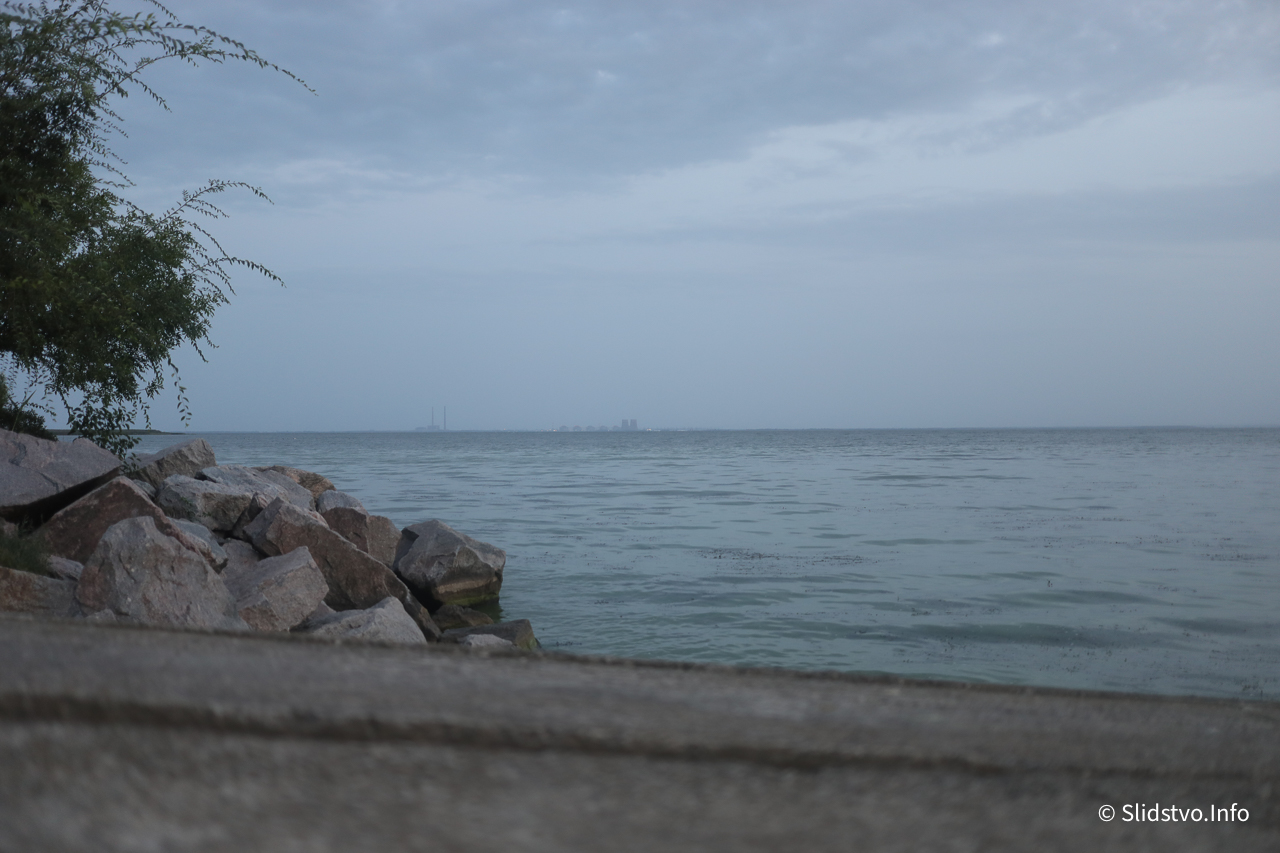 View of Zaporizhzhia NPP from Musiivka near Nikopol

Oleksandr draws attention to the smoke, saying – yesterday it was burning at Zaporizhzhia thermal power plant. “Look, it’s all in smoke,” – the man adds.

This has been going on for several days.

He says that for a month and a half, the occupiers have been shelling the side of the reservoir controlled by Ukraine every night – they start around 10–11 pm, and finish at dawn. He says that many people have left the village, Nikopol and Marhanets.

“Children, elderly people, women. People are afraid. Everyone has, of course, hope for the Ukrainian Armed Forces. As long as there is war, there will be no work in peace, – the man says, – Russia will never be forgiven for this.” 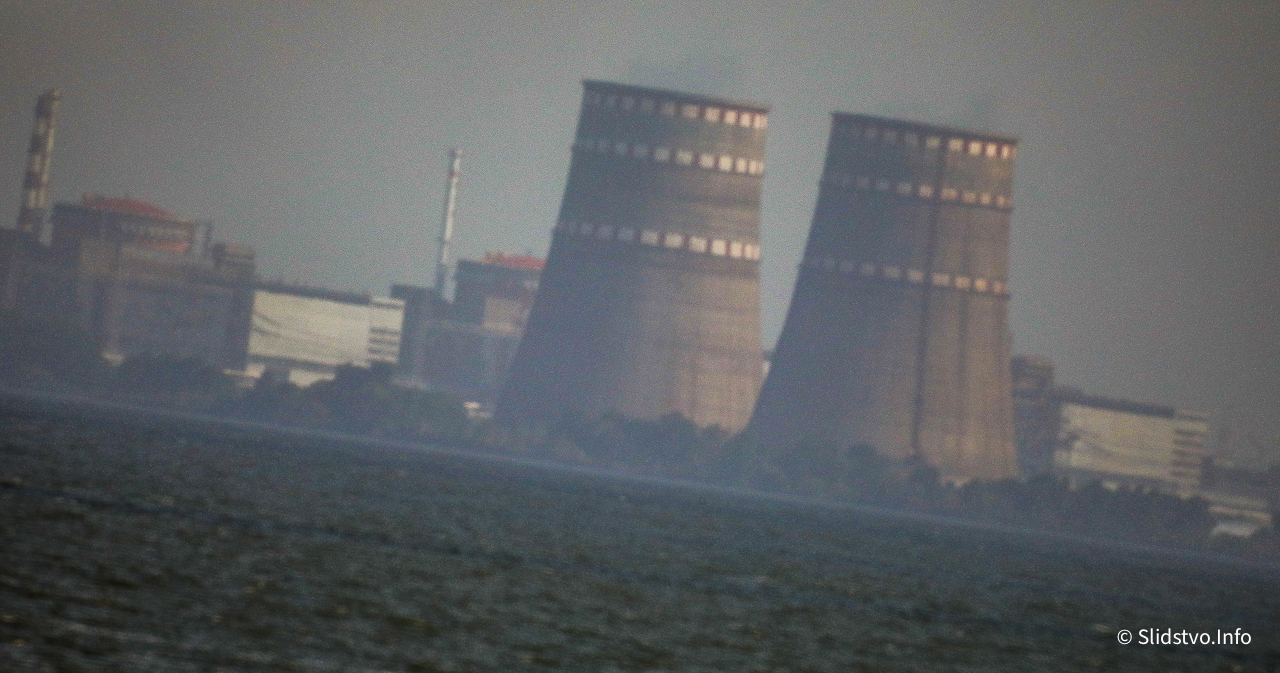 That night, the enemy fired ‘Hrad’ and artillery shells from Enerhodar at least once an hour. As the leadership of the Dnipropetrovsk military-civilian administration later reported, Nikopol was shelled 42 times that night and the buildings of the court, markets and bus station were hit, as well as residential buildings were damaged.

“WE BREATHE EVERY OTHER TIME”

Having received the entry permit, we are heading to Nikopol. At the entrance to the city we are met by Natalia Horbolis, the administrator of the Nikopol City Council, who will accompany us during the trip.

Together with her we are heading to the city center. Despite the fact that it is the weekend and the residents have finished their work shifts, there are not many people on the streets. A couple is sitting in a coffee shop opposite, a few cyclists are passing by. A new patch in the asphalt is visible next to the neat boulevard. Natalia says that a ‘Hrad’ artillery shell hit here on August 19.

“They were shooting at Nikopol and villages close to it. They shelled with ‘Hrad’ and artillery. This is the place of ‘arrival’,” she shows. She says that the Russian artillery fire has not stopped for a month and a half, although before that the city was relatively calm.

“Since July 12, we have been under fire every night, – says the administrator, – At least 50% of the population left the city. There were no evacuation measures, people themselves decided to leave for a safer place. It is normal to hide”.

While we are inspecting the place from the ‘arrival’, a woman looks out of the window of a house cut by shell fragments and shakes out a soft toy to clean it from the dust. Later her husband comes out and invites us to see how their house looks after the shelling. When we enter the apartment, the first thing we notice is a thick layer of construction dust and the same dust in the air.

“We breathe every other time,” says Yuriy, the owner of the apartment.

A Ukrainian flag hangs on the wall of the cramped room, and there is a gaping hole in the window of the opposite one. The man says it was smashed by a fragment. The same fragments pierced the wardrobe and damaged things. He shows torn and mangled clothes saying that now he has branded clothes, and shows a collection of shell fragments that he collected in the house. Yuriy and his wife are gradually cleaning and plan to repair furniture and things. They are not going to leave yet – despite the fact that the house was damaged. The man says that the first explosion on August 19 was at half past four in the morning near the monument with a tank nearby.

“I ran very fast with my wife: we took our stuff and went to the bomb shelter. To the basement, of course. Then was the second explosion – I do not know where – a little louder. And the third time the house jumped a little and my ears rang a little”, – Yurii says. 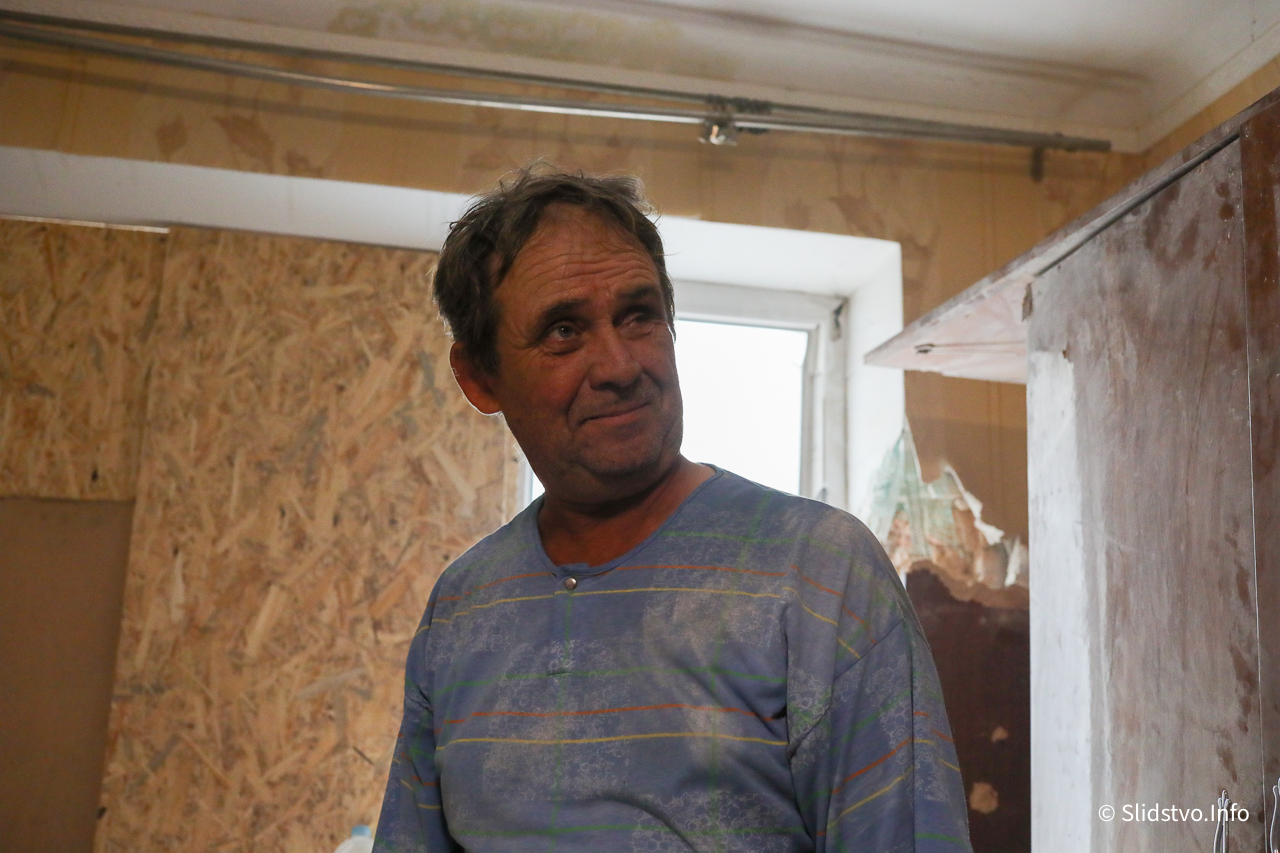 The owners of the apartment had to look for their cat – it was so scared of the ‘arrival’ that it took them a while to find it in the ruined apartment. When we try to pet it, the owners say we’d better not – the animal has not yet recovered from the shock, so it can scratch. 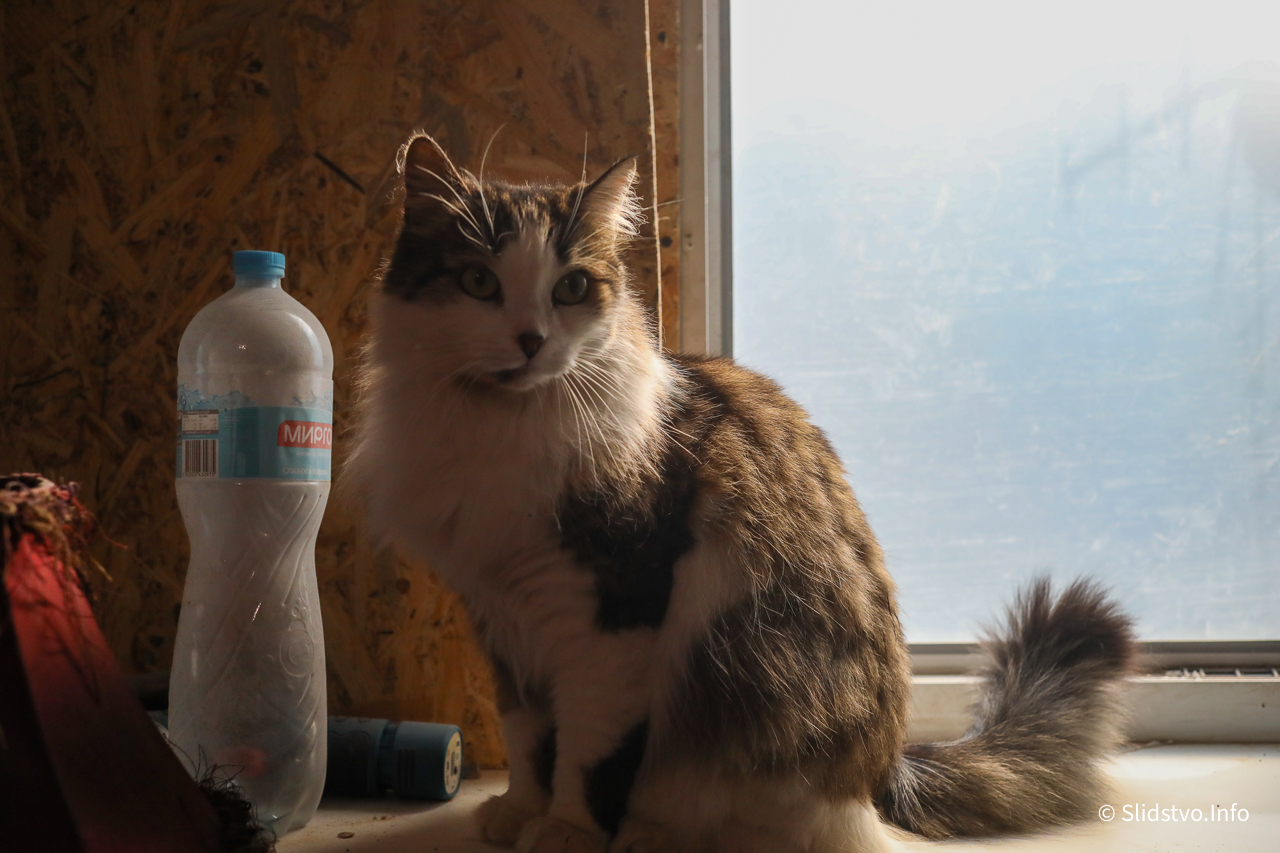 “I REGRET THAT MY FATHER DEFENDED THE SOVIET UNION”

Then we go to the yard. Here Natalia shows us several more craters from ‘Hrad’ missiles. Windows in the surrounding houses are broken. The City Council Administrator says that they try to help the residents of Nikopol with building materials and quickly fix the problems with the infrastructure after the shelling. From here we go to the tank, which is located in the city park near the memorial plaques to the fallen in World War II.

“Apparently, they were afraid of the tank monument. Maybe they thought that it was loaded and would shoot at them,” Natalia sneers. Tank in the park of Nikopol, which was shelled by Russians

There are not many people in the park either – only a young couple and a few elderly people. When we are hiding under a spreading tree from the sudden rain, one of them approaches us. Mr. Oleksandr says that he was born during the war (transl. – World War II), and he did not think that he would have to see this. The man says that he does not want to leave, but the shelling is hard to bear – his heart fails him at such a respectable age. He says that his father fought during the Second World War and died. Mr. Oleksandr was born during the Second World War, but he did not think that he would have to survive the shelling in Nikopol

Finally, he says that both the tank and the memorial plaques to the Soviet army dedicated to World War II should have been removed long ago.

Natalia shows the Park of Glory, where the shells hit the alley. Nearby there is an apartment building that is missing several upper floors. The damage is covered with construction wrap to prevent further destruction. In another high-rise building a shell hit the roof. “It hit the fifth floor and exploded. The fifth floor fell on the fourth floor. A resident of the fourth floor died here”, – the woman says. 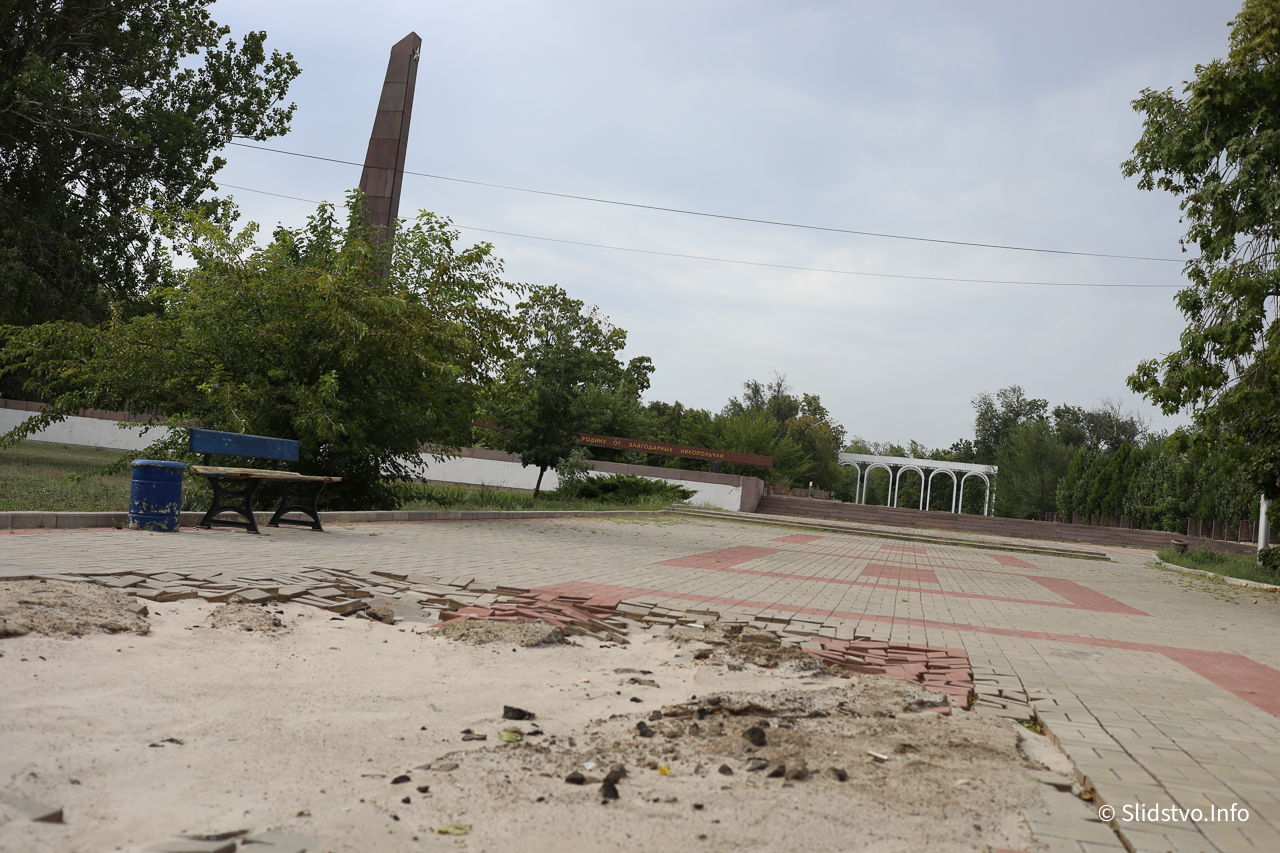 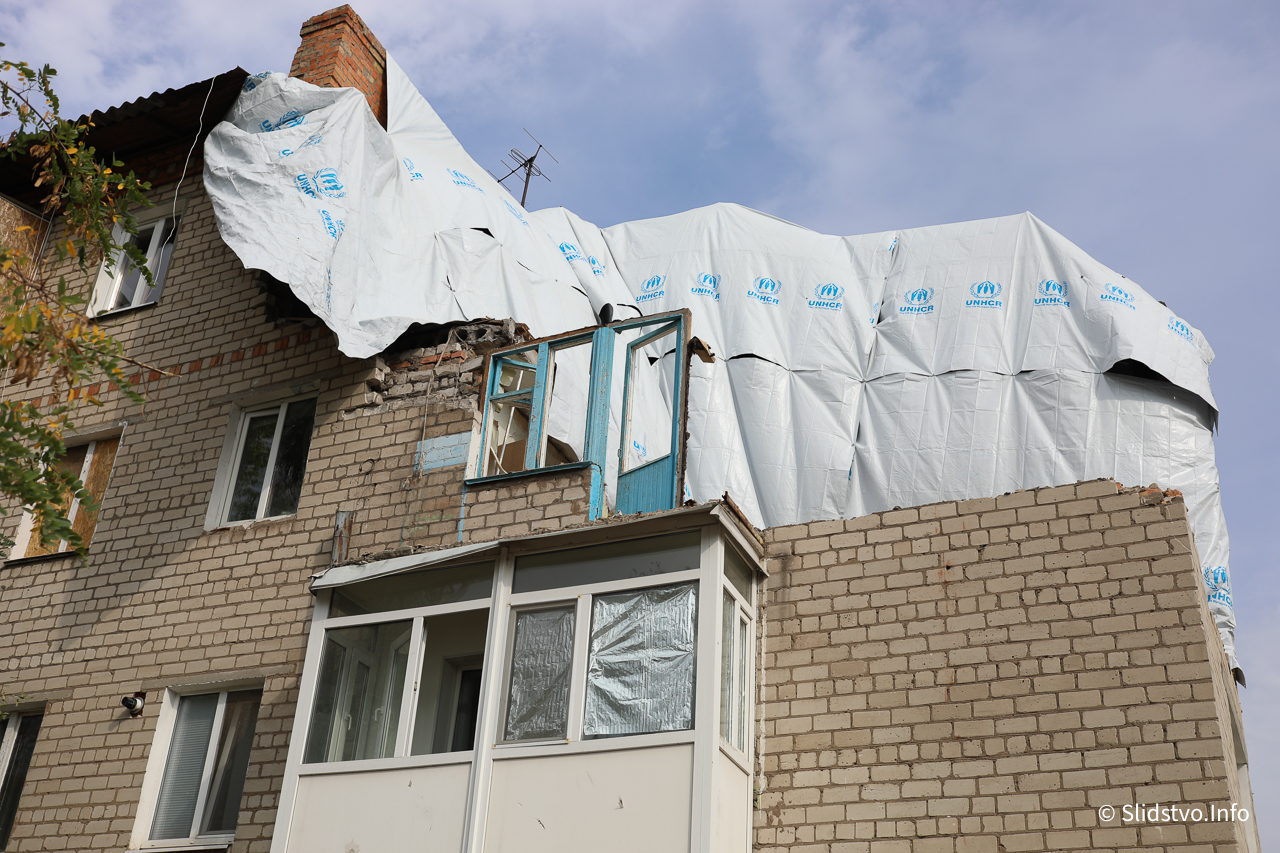 One of the houses destroyed by Russian shelling in Nikopol

In total, more than 700 houses and many social infrastructure facilities have been damaged in the city. For example, an enemy shell struck the toilet of a local resident, and its fragments hit Lyceum No. 16 nearby.

Men are working in the yard of the lyceum – the Deputy Headmistress Anna Povarenko says it is the parents of children and graduates who came to help fix the broken windows.

“As a result of the enemy shelling, 34 windows were damaged, the slate on the roof was damaged by fragments. There are cracks in the building in the library – these are the consequences of today’s shelling,” she said. 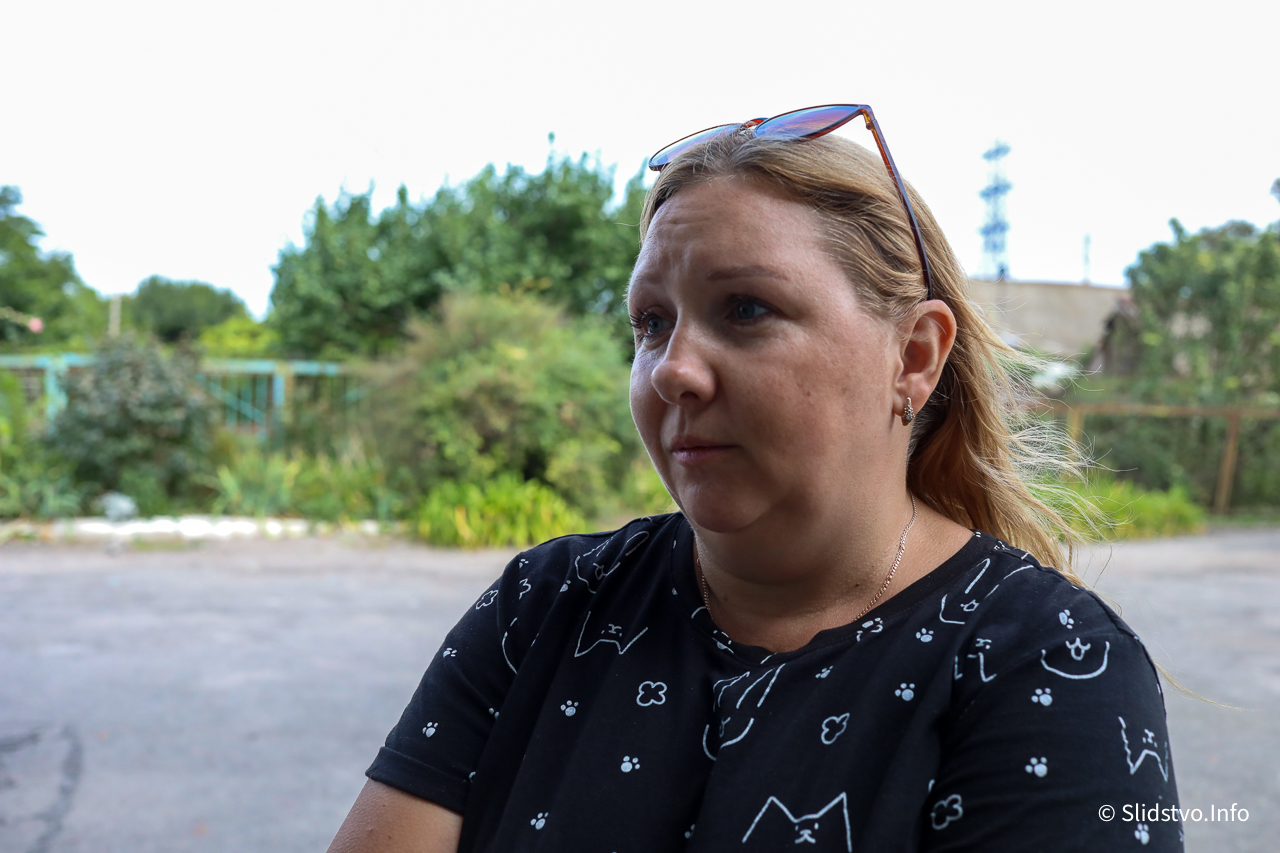 No one was injured by the explosion – Anna says it happened at two in the morning, and the air raid alarm was off at half past six, so everyone was in shelters. Meanwhile, the men, having finished installing another sheet of plywood in place of the window pane, joke: the Russians want to de-Nazify the Ukrainians so much that they have even de-Nazified the local toilet.

The students will study at the lyceum remotely.

“Well, there is no explanation at all. We have no military units nearby. In general, we have nothing like that here. Just neighbors, ordinary yards,” says the Deputy Headmistress. 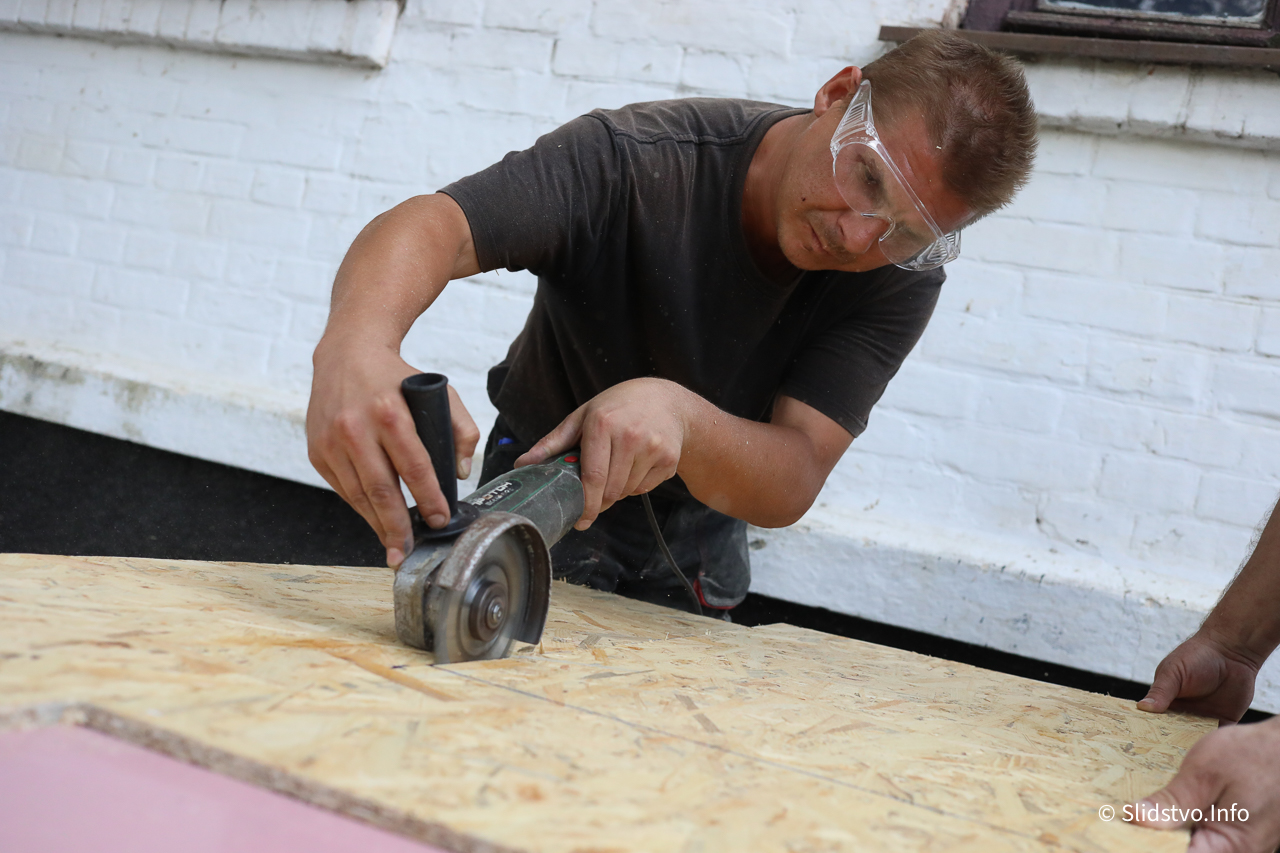 While we are inspecting the destruction in the city, the air raid alarm starts. But people are not in a hurry to hide. We ask Natalia why no one reacts.

“They react more to our sirens when we are warned about the danger of artillery shelling,” the woman says. She adds: “There were no troops, no military equipment, no bases in our town. Did you see anyone from the military or military equipment?”.

“NOBODY SLEPT IN NIKOPOL THAT NIGHT”

We are going to the City Council to talk to the Mayor Oleksandr Sayuk.

“Nikopol residents live a peaceful life. They go to bed, they wake up and they are shelled,” he says. They stopped counting the number of ‘arrivals’ in July, when it reached more than a thousand in total. 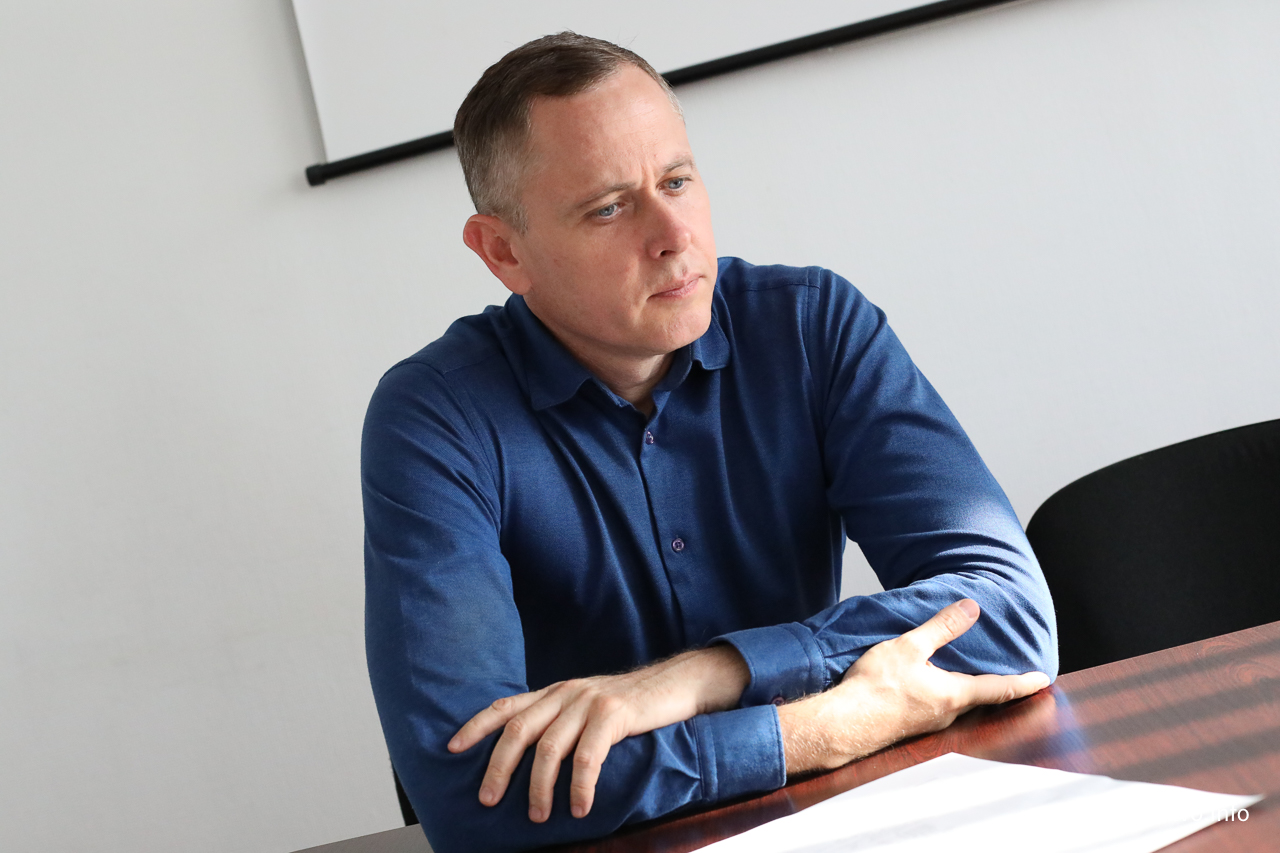 First of all, he is concerned about the safety of the city for which he is responsible. However, he says that Nikopol may remain unharmed in case of an accident, but other cities and countries may suffer.