Головна Сторінка » English stories » «I Put a Brick Under My Head and So I Slept»: How the Woman From Mariupol Has Survived Under the Russian Fire 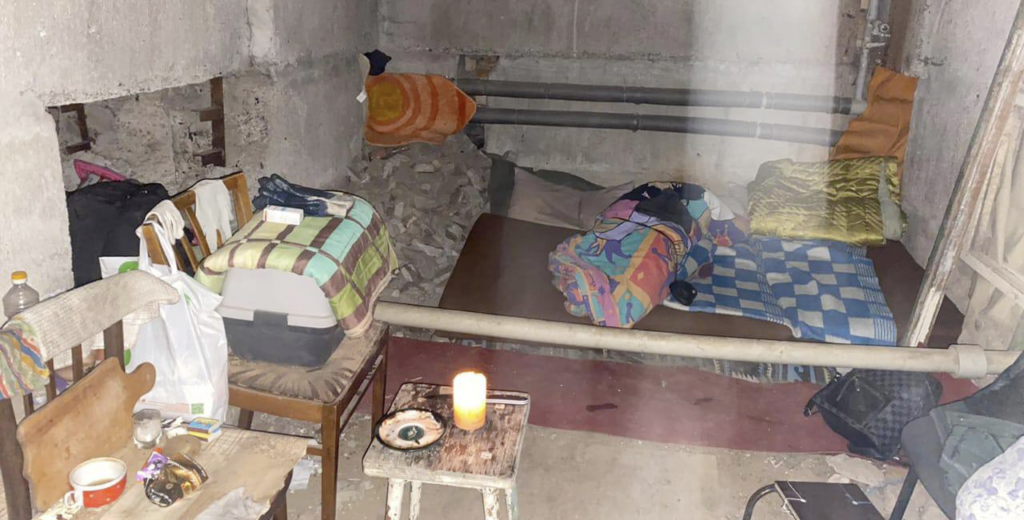 Yulia, 43, worked as a rehabilitator in Mariupol. In the early days of the war, she was meant to be taken out of the city, but she met a family of acquaintances on the street, they had nowhere to go. Yulia sheltered them and decided to stay to help this family. So, she spent a month under constant fire and survived. Now, the woman is together with her relatives in Kropyvnytskyi.

Yulia shared some photos and memories of almost a month of survival under the shelling in Mariupol with «Slidstvo.Info». You can also read the text in Ukrainian here.

«Yulia, We Are Probably Going to Stay With You»

On February 24, when it was still possible to leave the city, I went to work. I work as a rehabilitation specialist and administrator at a spine and joint treatment center. I had to pay people their salaries. I did not want to let the team down.

Since 2014, we have gotten used to living near the shelling. Then I have already left Mariupol for two months and have stayed in Kropyvnytskyi. This time it was also possible to leave the city at the very beginning of the hostilities but it became dangerous to leave the city just in a few days. I had not left and it turned out that I was stuck there. My daughter’s boyfriend’s parents were to take me out, they were getting out of Mariupol and were planning to pick me up.

I live in the Zhovtnevyi district of the city. I have been waiting for these people for a few days and was setting up my housekeeping. One day I went out for some technical water near the house and met a family of acquaintances on the way. These were my daughter’s old friends: Tetiana, a little older than me, her 22-year-old daughter Anhelina (my daughter’s age), and Tetiana’s 77-year-old mother. They came from the area where the fighting was already taking place. Tetiana approached me and said, «Yulia, we are probably going to stay with you. Or with my father, if he lets us in.» At that time, her father had already sheltered 8 people.

I found myself in a difficult situation because the parents of my daughter’s boyfriend were already waiting for me somewhere. But I could not leave my friends, so I did not come to the meeting point and eventually lost touch with them. 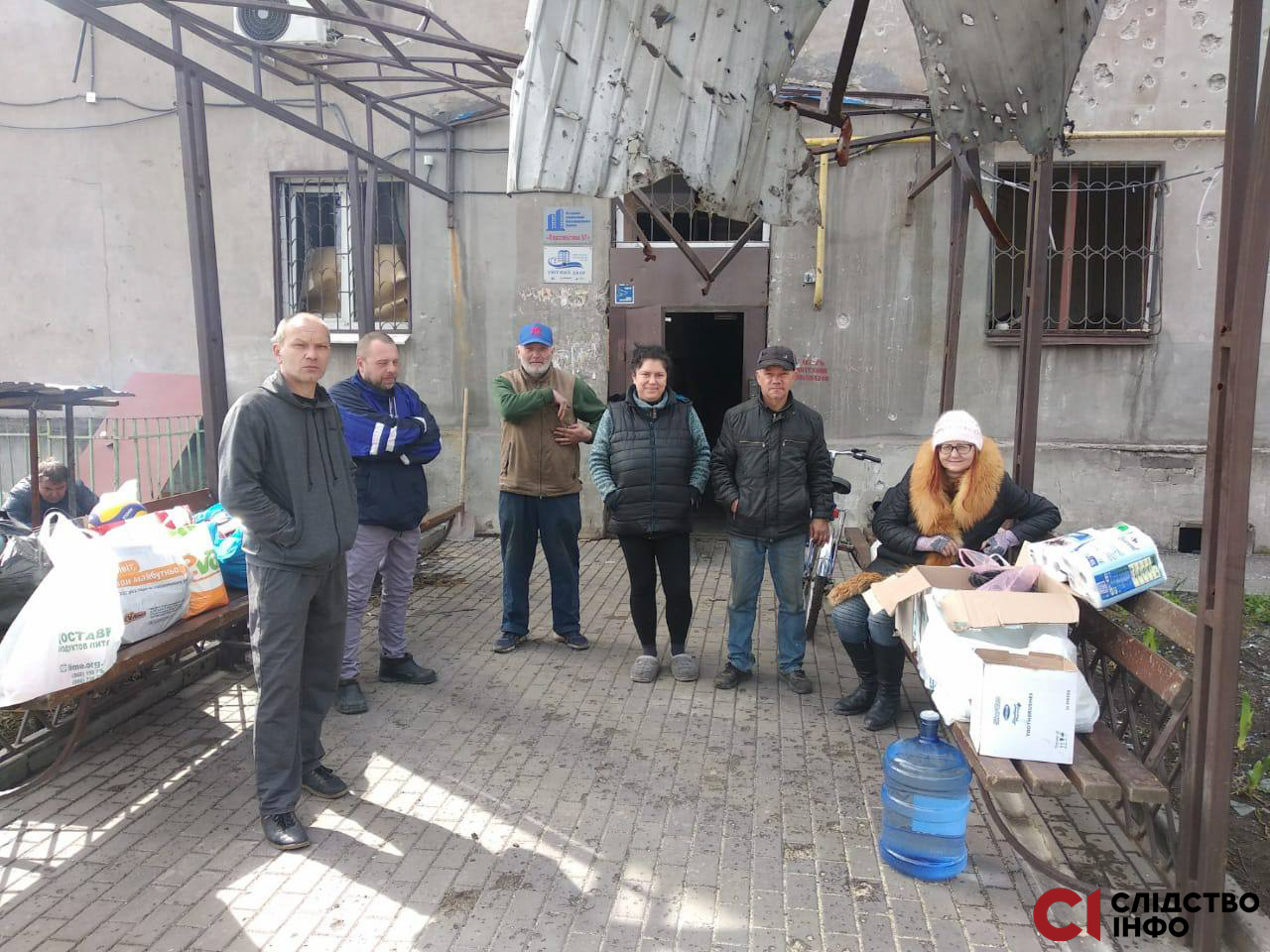 The Cat Saved My Life

That’s how we started living together with this family. We made a fire near the house and prepared food. We have a one-section house and very friendly people living there. We all gathered together and prepared 12 pots of food for the whole house.

At first, I slept on the floor in the corridor, and then I started sleeping in the children’s room. When the maternity hospital was bombed, everything went in our direction — then it was a very restless night. I slept badly and was tired the next day. I wanted to have a nap.

My cat always sleeps with me, and then he went to another room and lay down next to Anhelina’s dog. I went out on the balcony to look for him, and heard a sharp rumble, as if something huge was flying. Suddenly, an explosion happened. I saw the debris, dust, glass, concrete, and sand falling into our hallway. Exactly where I just had to sleep. It stunned me, I hit my head and I heard ringing in my ears.

Anhelina took the dog and the cat, and we ran outside. A shell hit the end face of the house. My neighbor was standing in front of the house, his arms were bleeding and his leg was injured. He was holding a pot of pilaf and said, «I heated up some pilaf for you. Yulia, you have guests, you need to eat something.» 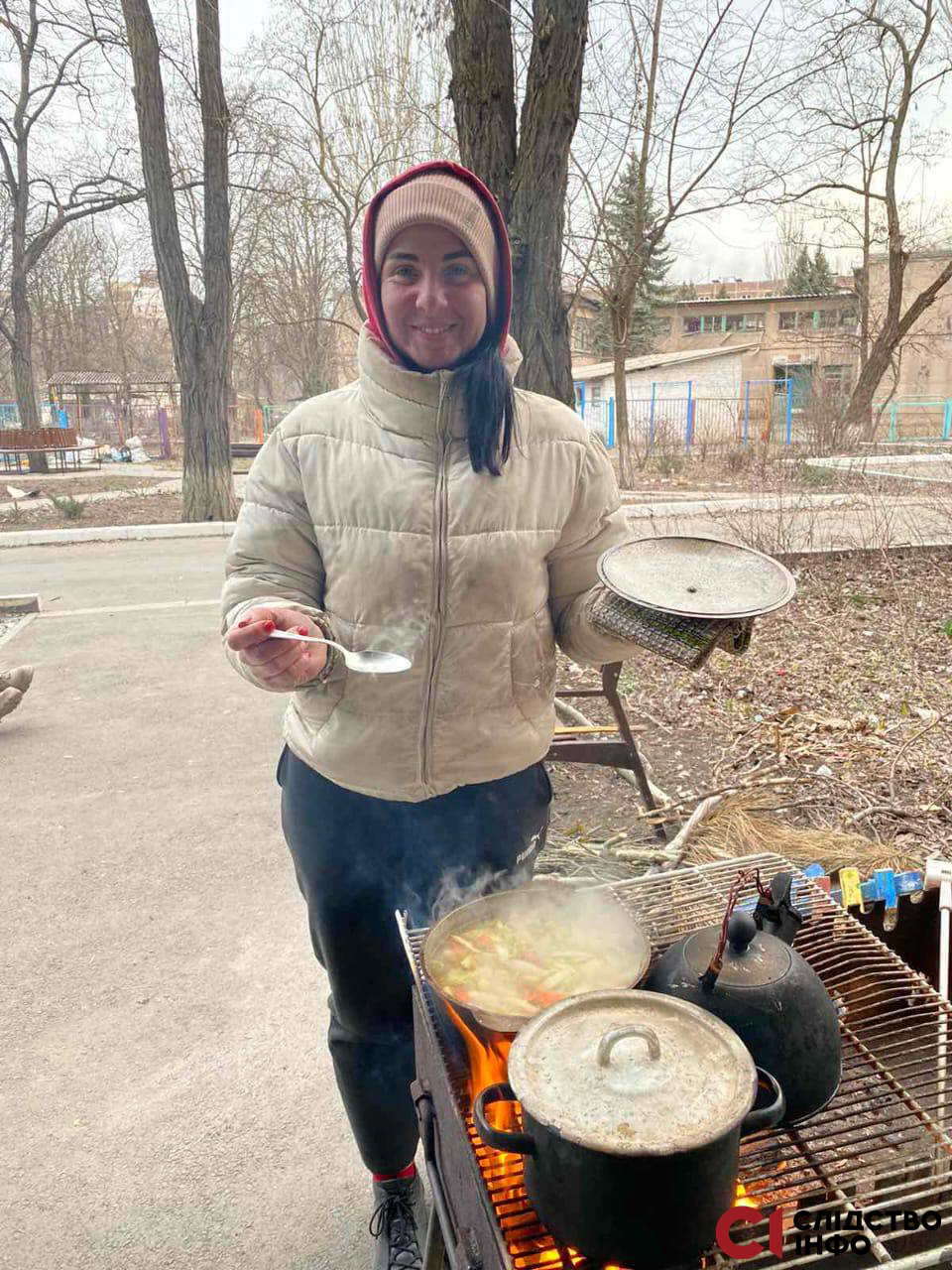 We ran to the house next door, but there was also a fire. Then we ran across the park to the house of the 77-year-old mother of Tetiana. It has eight sections and we went to the basement. We didn’t have time to take anything with us — only water and animals.

In the basement, pipes hang just above you, ground and stones are under your feet. At first, they didn’t want to let us in, but then we explained the situation and they let us stay in a free room. People arranged other basements of the house for themselves: they put mattresses on the floor, and equipped everything. We didn’t have all this, we just took out the chairs and slept on them the first night. I found a niche in the wall, curled up there, put a brick under my head and so I slept.

The next day, a nice man from the first section, Misha, brought us a sleeping bag and some blankets. On the second or third day, we were able to come upstairs to the second floor, where Tetiana’s mother’s apartment was, to take some basic things. Before that, there was constant shelling. We lived there for ten days like this.

There was no food and Anhelina gave us half a boiled potato or egg. We shared a cup of water in sips: three of them, I am the fourth and we have a dog and my cat Lex. Everyone got a sip and we left the rest for the dog and the cat. I laid two of my T-shirts in the basement so that Lexi could sleep on them.

The nights of March 12 and 13 were the hardest. Everything was on fire. The planes flew in pairs and dropped 4 bombs each. We began to distinguish between all these howitzers, mortars… Once, we could not go outside for three days. Rats ran around us at night, and Anhelina kept asking, «Yulia, are we going to die?» 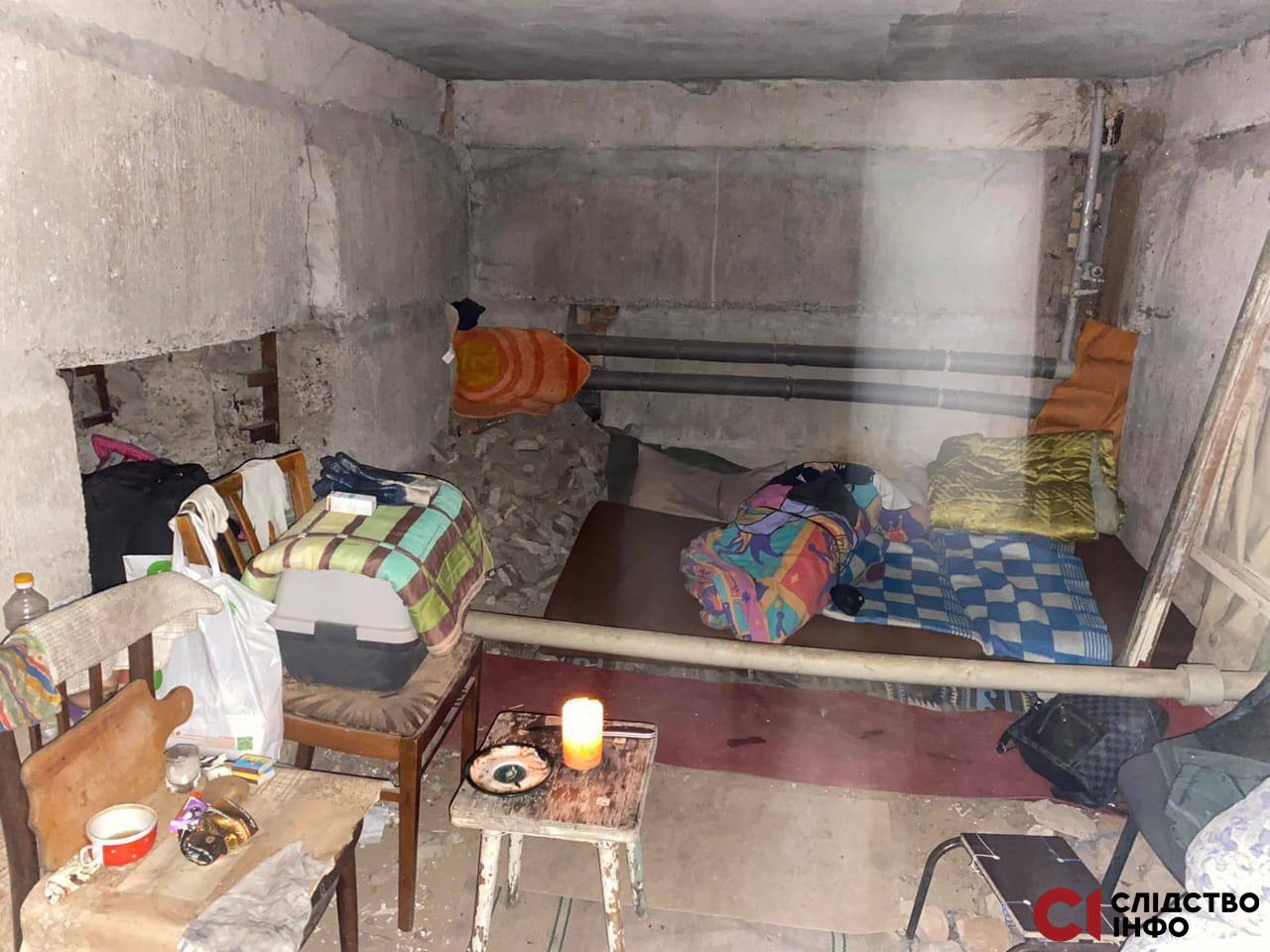 There was no food. And one day, under this cannonade of explosions, I decided that I needed to run home again to take some stuff and food. It takes about 7-10 minutes, but it took us 20-25 minutes through the park to get there. In a couple of days, the earth was already scorched there.

We ran out and halfway through we realized we could die that time. We hid in the ditches near the stairs. Tetiana wanted to come back, but I said, «You have a mother and a child, how are we going to feed them?»

My whole house survived, but it was impossible to live there. Tetiana couldn’t even enter the section — everything collapsed. We hold hands and she says, «Yulia, let’s not separate.» Although many people are advised to relocate alone. First, we ran to her place, which is in another area, and then, on the way back, to my place. On the way, we fed Tetiana’s niece in another basement.

Everything around was burned down, all the houses. It burned and then simmered for two or three days.

While we were running, we saw graves and corpses everywhere in the yards. We were in such despair!

When the bombs started to fall and there was heavy shelling, Misha took his bike (it was about 2 a.m), asked me to push it, and left. He had only a bottle of water and a flashlight. He said, «Yulia, we can’t stay here.»

We Weren’t a Part of a Column, We Rode Alone

One day Anhelina’s father, who has another family, found us and took the girl with him. He was taking his wife and children out of town. Anhelina’s mother and grandmother and I stayed there, but the next day he unexpectedly came back to pick us up because he was taking the rest of his family away too. We crowded into his car, Tetiana and I sat together in the trunk.

We stopped for a second at my house. I grabbed some food and put on some jeans because I could already throw the clothes that were on me away. And at this time I saw the tanks marked with “Z”. They just moved along our beautiful alley, through all the benches. This is an alley where we used to walk before. It seemed to me such an atrocity. The impression that no one regretted anything. They were simply destroying everything without any purpose.

When we drove away from the city, we just had tears streaming down. We were watching as our city was on fire. Locals took water from some warehouses using the carts. It was already March 20.

We arrived in Yalta (the city in Donetsk oblast), where my friend was already waiting for me. She asked her acquaintances to take me to their car. There was a family with children and a grandmother. The man who was driving the car had some eye injuries, so a person with a driver’s license was needed. But he was driving all the time because if I had replaced him, he might have not been let go. We weren’t a part of a column, we rode alone.

They asked us to open the trunk, looked through all the bags and looked for chargers. They needed some specific charger for the phone. At one of the roadblocks we were politely asked to give them a flashlight from the glove compartment.

Some men were stripped down to their underpants. They checked their phones. I hid my phone under the carrier of my cat Lexi.

At one of the sections of the road, we were stopped every 200 meters. After Polohy, there was our roadblock. I could not believe that in such a short distance there was Ukraine.

I have reached my relatives in Kropyvnytskyi. I have a father and two brothers here. According to the messages in the chat of our house residents, I see that the neighbors who stayed there are guarding the house. Our house survived. It has no windows and is partially shattered, but is standing.

Murders and Torture in Motyzhyn: the Suspicions to the Occupiers, the Majority of Whom Were Identified by «Slidstvo.Info», Are Announced

«It Is as if Your House Was Stolen Along With You. And Was Connected to Some Other Country», — The Story of the Woman Living in Occupied Kherson

The Commanders of the «Bucha Executioners»: The Russian Officers Responsible for the Genocide in Kyiv Oblast

The Prosecutor’s Office Announced Suspicions to Ten Bucha Executioners: Who Are They and What Crimes Have They Committed

Deport Thy Neighbor: How the Russian Orthodox Church Together With the Security Forces Forcibly Relocate Ukrainians to Russia

Five Days of Interrogation: How a Ukrainian Woman with Two Children Fled the War Through Russia to Estonia 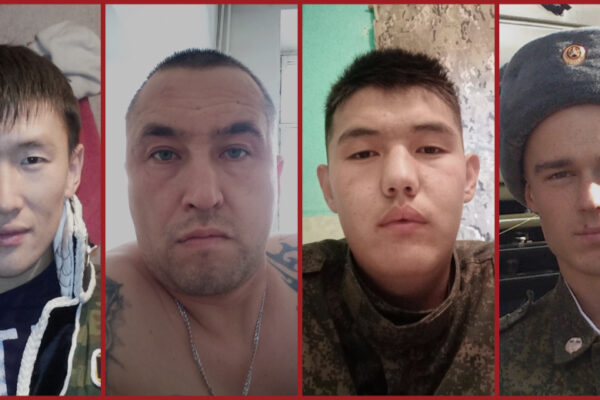 During the occupation of Kyiv Oblast, the Russian military called friends and relatives with their Russian numbers 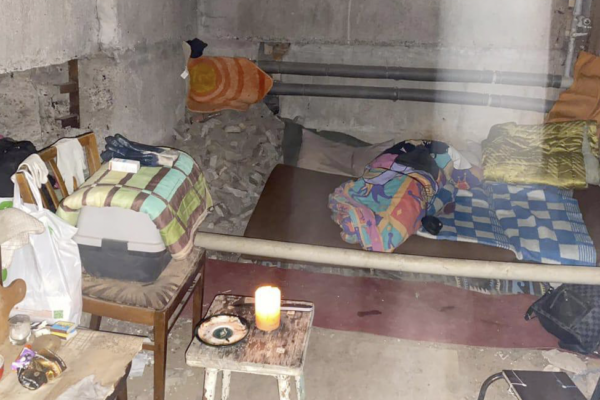 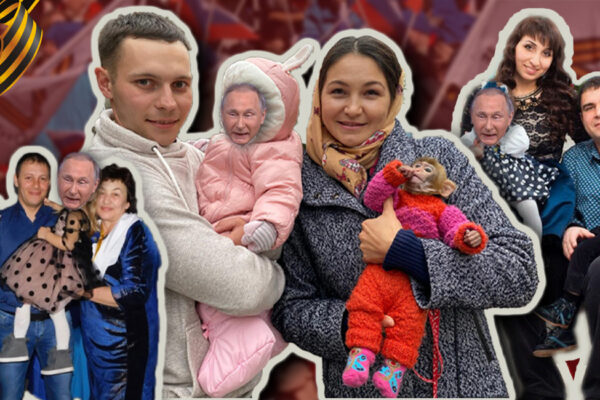 «Slidstvo.Info» has investigated the lists of the Russian servicemen who take part in the seizure of Pryazovia and ...